Night Slashers is a beat-em-up, and not a particularly revolutionary one, at that. What makes it unique, though, is its campy horror setting. Despite the fact it takes place in more modern times, it’s more or less the closest you’ll get to seeing Castlevania in beat-em-up form. Despite the modern urban setting, you’ll see about as many zombies, werewolves, and vampires as all the Belmonts put together would. The story is that the dead have risen from their graves, and monsters and mutants prey upon what’s left of the living. Three monster hunters have joined together, using their knowledge of the occult to slay the undead scourge. 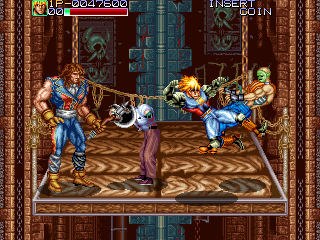 There are three playable characters. Christopher is a European vampire hunter, who wears a nice suit and attacks with the power of God. Jake is an American street brawler, who has two big metal arms with guns inside of them. Finally, Hong Hua is an Asian martial artist, and the only one who doesn’t speak English.

Night Slashers isn’t incredibly different from most brawlers you might have played before. If you’re familiar with Capcom’s beat-em-ups, like Final Fight or Captain Commando, you’ll be able to get into it just fine. You’ve got your standard multi-hit combo, performed by rapidly hitting the attack button. Then there are two kinds of aerial attacks, one performed by hitting attack while in the air, and the other done by hitting Down and attack. Of course by hitting both buttons, you get your standard special move for clearing out enemies crowded around you. You can grab enemies and throw them in different directions, as well, and you can run by double tapping Left or Right. Sounds pretty familiar so far, but there are a few interesting touches. 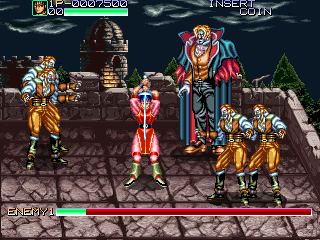 There’s a a third button that, when pressed, will cause your character to do a screen-clearing elemental attack, Golden Axe-style. Unfortunately, this shaves off so much of your health that you might as well just fight your opponents normally, unless you’ve got some health items nearby already. It also double-functions as a blocking button when your health is low. What’s more interesting is that your downward aerial attack will actually embed enemies in the ground. From there, you can kick at their exposed heads and deal extra damage to them. 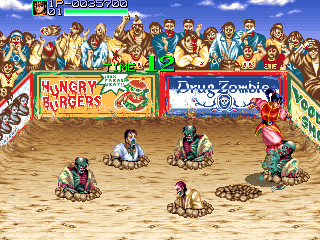 You can also make a fiery circle form around your character by holding down the attack button. Once it forms all the way, you can perform a unique move on the ground or in the air by letting go of the attack button. If you charge it too long, though, you’ll end up getting stunned. Sadly, however, weapon variety is pretty limited compared to most beat-em-ups. You’ll find knives, briefcases you can smack enemies around with, and elemental orbs you can throw at enemies, but these tend to be surprisingly rare. 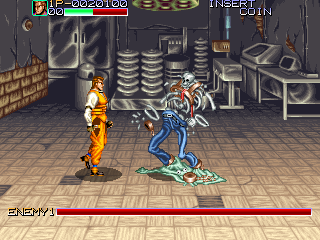 The enemies you fight range from the standard horror staples, like zombies, vampires, and werewolves. They all tend to go down pretty fast, so much so that the game doesn’t even bother giving you a health bar for them. It’s actually pretty cool to be able to tear through enemies so quickly. Say what you will about Capcom beat-em-ups, but kicking three zombies so hard in the face that they all fall apart into a bloody mess at the same time just isn’t something that happens in any of them. Each stage also has at least one miniboss, along with the final fight at the end. The bosses themselves all are from the kind you’d expect to see in a game like this, like a wrestling Frankenstein’s monster, or a mad scientist. What’s really weird, though, is when Geppetto and Pinocchio team up to fight you. Of course, you’ve also got Dracula in there, because you have to have Dracula. 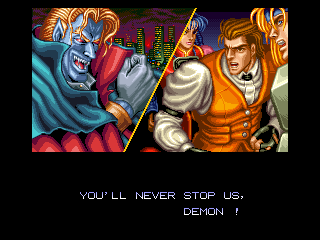 What makes up for the rather typical gameplay, however, is just the way the game feels. The first thing you see once the initial stage begins is your character’s van running over about two dozen zombies, before crashing into a wall. Needless to say, it’s an interesting first impression, and while the game never does something quite that awesome for the rest of its duration, the presentation for the most part tends to keep that same kind of pace. There are also two bonus stages in the game, one where you try to kick as many grounded zombies as possible within a time limit; the other, much more interesting one is basically zombie bowling. Here you mash the attack button to see how far you can chuck a zombie into a row of other zombies set up like bowling pins. The better you do, the more of them explode, and the bigger your bonus. 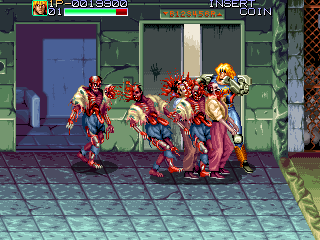 Blood and gore isn’t an entirely new thing for beat-em-ups, but Night Slashers is still surprisingly graphic. The player characters don’t do as much as bleed a single drop of blood, but the same doesn’t apply to their enemies. Zombies blow apart into meaty chunks, vampires melt into a bloody mess, and werewolves dissolve into puddles of goo. Besides the blood, there’s other neat touches, like the way the screen violently shakes every time you do a throw, giving your moves some nice feedback to them. It does help to lessen the repetition inherent to this type of game. 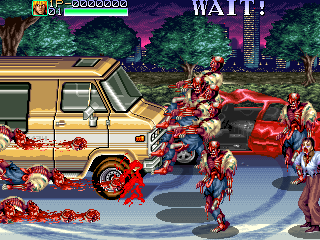 The voice work is some of the most enthusiastic, overacted stuff you’ve heard in a beat-em-up since Captain America and the Avengers, and while none of the lines are as awkward as “You will be the one escaping!”, it still has about that same level of cheese. Jake announces to bosses that “I have the power to destroy you!”, while Christopher tells enemies that “You caught me off guard!” every single time he gets knocked down.  Each character also has a short, unique conversation before every boss fight. These are just as enjoyably cheesy, with lines like “The only thing that’s gonna need transforming is your face after I’m through with it!” Musically, the soundtrack is an mix of sampled guitars and creepy organs, and is quite excellent.

Night Slashers was released globally, and there are some differences in the versions. The American version is almost identical, but in the other international version, the blood’s been recolored to green, and some of the more violent death animations for the enemies have been removed. Both are also missing a nice little touch where the “Go” arrow would flip over to reveal the words “To Hell!” written in blood. The Japanese version has a few extra pictures in the between-level-cutscenes, as well, and the American version is a little more difficult. 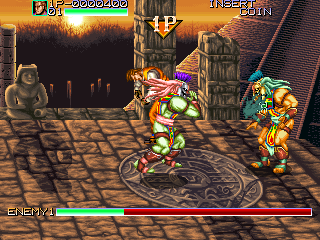 From a pure gameplay perspective, Night Slashers is decent but not amazing – any of Capcom’s beat-em-ups like Alien vs. Predator or Battle Circuit are a bit better. What makes it special, though, is the campy horror theme, along with some memorable music. If you’ve got a couple of friends, you’ll hardly regret playing through just to enjoy the voice acting alone.