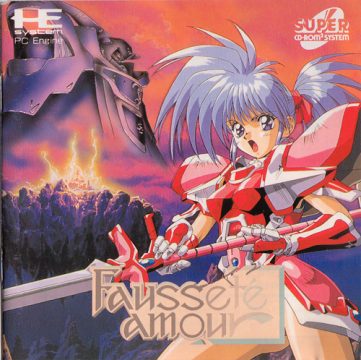 Naxat’s PC Engine title Fausseté Amour seems promising. The main character attacks with a multi-directional whip, recalling shades of Castlevania, and can swing on practically any ceiling a la Bionic Commando. It fetches a high price on the aftermarket, so one might assume that it’s an under-appreciated gem that combines elements from two of the best NES games in existence. 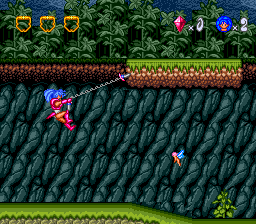 Sadly, that’s not the case at all. In this game you play as a scantily clad chick in power armor. When you die, all of your clothes disintegrate and you lie as a naked assemblage of pixels on the floor before restarting your next life. It’s one of those types of games that focuses more on the attractiveness of the heroine than the quality of the actual gameplay.

Fausseté Amour seems to be riding on the popularity of Telenet’s questionably venerable Valis series, which proved (to absolutely no one’s surprise) that gamers tend to like girls with swords in skimpy clothing. The title is technically mangled nonsense (in what’s described to be as Franponais, or French and Japanese) for “False Love”. (The proper French title would be “Le Faux Amour”.) The heroine is a blue-haired lass named Kolk Lance, who wears a fancy piece of pink armor that does well at covering her upper torso, but sort of runs out when it reaches the waist, where it turns into a crystalline thong of some kind. All the angles in the cutscenes are positioned to highlight this fact. Nearly all of the boss characters are spry anime females that have somehow been cursed into the form of gruesome monsters, who all transform back into their original cutesy form after being defeated and give a totally unnecessary speech during the post battle cutscene. Even the final boss – the only real male character in the game – morphs into a goat-like monster with supple breasts that seem suspiciously enhanced. 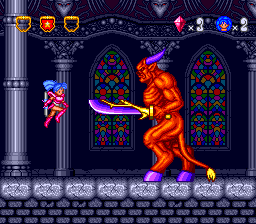 Taking a note from Ghosts ‘n Goblins, Kolk loses her armor after taking a hit from an enemy. (It doesn’t shatter or fall off, it just flies into the sky, as it if were being summoned by a perverted God or something.) Her undergarments consist of a surprisingly conservative one-piece white swimsuit. If King Arthur can run around and fight the undead in his boxers, then it’s just a matter of gender equality that Kolk can do the same. At least this is about as risque as it gets, seeing that it’s not an out-and-out porn game like Steam Hearts.

Kolk wields a metallic extendable baton that can be swung in any direction. Compared to the whips in the Castlevania games, it’s a bit too quick, and can be hard to hit enemies with in spite of its versatility. There are also three different magic spells, which are obtained through power-ups dropped by little fairies, including a straightforward fire attack, a homing lightning attack, and a useless air based attack that shoots straight upward. Due to the lack of buttons on the Turbo controller (and that fact that pressing Up and Attack, a standard to use special weapons in NES games, actually causes Kolk to attack upward), you need to jump and then pretty Down and Attack to cast your magic. You can use this magic as often as you want, but trying to hit anything with the air or fire attacks can prove to be an exercise in futility. On the other hand, the lightning is so overpowered that very few enemies pose much of a threat. 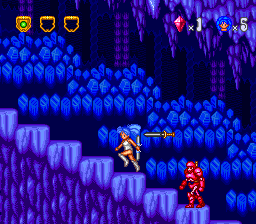 By pressing Jump twice, Kolk will extend her weapon diagonally, which will grapple onto a nearby horizontal surface, leaving her swinging Indiana Jones-style. Unfortunately, the mechanics here aren’t nearly as refined as Bionic Commando. Double tapping the Jump button to grab onto things isn’t exactly intuitive, and you can’t extend or retract your weapon all – you just sit there, swinging slowly. The only reliable way to climb up is by pressing the Attack button, which will cause Kolk to somersault into the sky. This is pretty fun, especially since she’s invulnerable during this period and can buzzsaw straight into enemies.

The most frustrating issue is that the level design rarely uses these mechanics for anything interesting. In the first few stages, you can swing up to higher ground and explore different parts of the stages, but there aren’t any obstacles or challenges that require mastering it. The only level that pressures you to swing with skill is the fifth stage, where you need to climb a vertical tower that’s slowly flooding with lava. 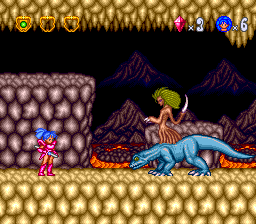 The rest of the stage designs are boring, consisting of haphazardly placed platforms and enemies. There are way too many instances where you need to make blind jumps and end up either falling into a pit or slamming into an enemy. There are seven stages altogether, ranging from a forest stage, to a cave stage, to an ice stage, to a fire stage, and so on.

The action itself is too slow to be very interesting. Not all games need to be fast paced to be exciting – see, again, Castlevania – but the Belmont clan traipsed through its quest with a sense of urgency, whereas Kolk just saunters slowly, gently disposing of any bad guys that may wander into her path.

Fausseté Amour is one of those games that doesn’t really seem difficult, but somehow ends up proving frustrating. The fact that you can only take two hits contributes to this, but it has more to do with sloppy design. Many of the bosses attack with tiny projectiles that scatter haphazardly, and are difficult to dodge effectively. You get sent back to a checkpoint when you respawn, meaning you’ll need to meander slowly through the same areas over and over. 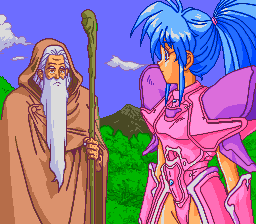 The graphics aren’t particularly impressive, and the music is mostly forgettable, except for one theme that sounds a lot like Michael Jackson’s “Thriller”. The title screen opens with screeching guitars that may imply a rocking Lords of Thunder style affair, but it goes nowhere.

At least the cutscenes look nice. They’re almost all poorly animated, with each usually consisting of only two screens, but the artwork is attractive, with each of the female casts members sporting the wildly colored locks that seem to be representative of PC Engine-style character designs. They’re more interesting than the Valis crew, even though they lack that nebulous 80s charm. The designs were done by Ryuichi Makino, who later did character designs for Battle Athletes (the video game) and Girls Bravo (the ecchi themed anime). 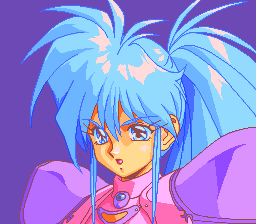 There are several expensive PC Engine titles of varying quality, ranging from “awesome” (Dracula X) to “decent but overpriced” (Sapphire, Kaze Kiri). Fausseté Amour doesn’t even approach that level, and seems content to be a thoroughly mediocre action game and little more.