Schbibinman 2: Aratanaru Teki (“A New Enemy”) seems to take place quite a bit after the first game. Tasuke is no longer a student and works as a cook in a local restaurant. Kyapiko is still going to school, but looks a bit older, too. These days, there isn’t much action going on. Ever since the fall of Dark Skull, Doc has been concocting paranoid conspiracy theories that an invasion is at hand, and he’s been sending the two Schbibinman out on wild goose chases. However, one such goose chase turns out to be legit, and it is revealed that an alien empire lead by an emperor named Ryo is plotting to take over the world, but this is only uncovered after Doc is kidnapped. Not only that, but a mysterious duo of villains possessing powers similar to the Schbibinman have appeared. These two Dark Schbibinman, named Jeeta and Mue, are out to kill Tasuke and Kyapiko. 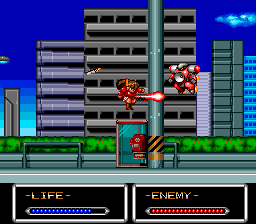 The first thing you’ll notice when you begin a game in Schbibinman 2 is that it looks the same, but plays entirely different. The swordplay has been removed. Now you bring down enemies with a ranged weapon that can be charged, just like Mega Man’s Mega Buster. The changes are both good and bad. While the action elements of the game are far more refined, and jump control has been fixed, the game feels a lot more dumbed down. No more world map, no more upgrades, no more hostages. It feels like an entirely different game altogether. Not only is the gameplay different, but the aura of the game has changed. The silliness has been taken down to the point where it’s almost completely gone aside from Doc’s antics. The game tries to be a lot more serious, and fails miserably at it by using the same plot elements we’ve seen dozens of times already on NES with games like Ninja Gaiden.

Everything else, however, has improved. The graphics are infinitely better than the first game, with much cleaner sprites and more detailed, multi-layered backgrounds. There’s also a lot more variety in the stages, each one being unique. There’s even a pair of fairly long horizontal shooter stages, which are almost the best parts of the game. The music quality and variety have increased drastically as well, although none of the themes alone compare to some of the better tunes from the first game. 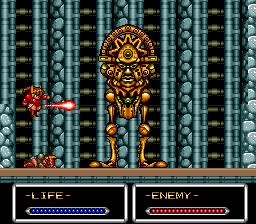 In all, Schbibinman 2 is quite vexing. It’s a step down from the first game in just as many ways as it’s a step up, so it’s very difficult to say whether it’s better or worse. The games are so different, they’re almost beyond the capacity to be compared accurately, and this is a little nuance that seems to be repeated with each successive game in the series. Fortunately, one thing that has remained the same is the ability to play a 2-player game with a friend.

Schbibinman 2 was the only game in the series to be brought to the US. It was redubbed Shockman, and the existence of the first game was not acknowledged. Tasuke and Kyapiko have been renamed Arnold and Sonya, because in the early 1990s, publishers seemed to think that any exposure to Japanese culture would make American children’s heads explode. At least they didn’t horrible alter the cover artwork like most Japanese 16-bit games at the time. Humorously, the script for both Arnold and Sonya’s game remains the same, so characters constantly refer to Sonya as a male.