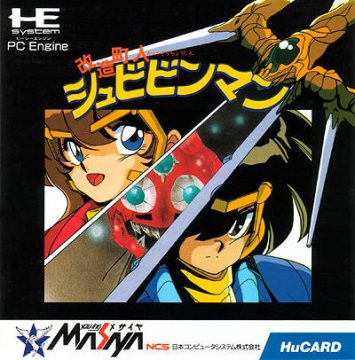 Kaizou Choujin Schbibinman (“Restructuring Super Human Schbibinman”; also spelled “Shubibinman“, which is a more literal romanization) is a series of 4 side-scrolling action platformers that differ greatly from each other. Put out by NCS/Masiya, a developer mostly known for strategy RPGs such as Langrisser, it takes a satirical view on henshin anime/live action like Kamen Rider, mecha, science fiction, and lots more by taking staples of those genres, such as transforming into an armored hero and making dumb poses, and amplifying the wackiness to an obscene amount. While none of these games particularly present anything new or innovative to the genre, they’re all quite well made and very fun. 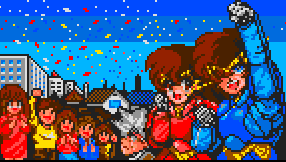 NCS pretty much got their start on NEC’s hardware. In the late 1980s, they established themselves with games like Gaia no Monshoō, Gaiflame, and Moto Roader. They’d primarily stick with the PC Engine throughout the 16-bit era, occasionally straying to put something out on Super Famicom, or more frequently, the Mega Drive. Schbibinman was their first attempt at a console-style action game, and with that in mind, Schbibinman is a pretty admirable effort. Unfortunately, the series is almost completely unheard of in the US, its second installment being the only one to make it to our shores under the title Shockman.

Kaizou Choujin Schbibinman is the story of two Japanese school kids named Tasuke and Kyapiko, who are in fact androids built by a mad scientist known only as Doc. Doc, who shares a bit of a resemblance with Doc Brown from Back to the Future, built Tasuke and Kyapiko with the ability to morph into armored superheroes known as Schbibinman. Their plight is to battle the evil forces of Dark Skull, an obvious knock-off of Darth Vader and Doc’s first attempt at a cybernetic organism who went rogue and established a gang of goons called the Skull Force. The Skull Force are trying to take over the city and have captured civilians in various locations. As the Schbibinman, you must take back the city, one building at a time, rescue the hostages, and defeat Dark Skull and his gang. 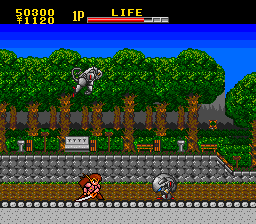 That’s about all the story there is to Schbibinman. If you want story, NCS has plenty of awesome strategy games for you. But Schbibinman was their outlet to focus entirely on action. One of the great things about the series in general is that you can play with both characters simultaneously in 2-player mode. Or you can just pick one or the other, although they function exactly the same in this game. Once you’ve chosen a character, you start off on a world map that looks much like the map from Starfox. From Doc’s lab, you can move to one of three Skull Force-controlled buildings in the city, from which three paths branch off and occasionally cross. You can go back and forth and clear every stage, though, so you’re not restricted to one path.

After selecting a stage, it plays out in standard action game fashion. You can attack with a sword and jump, and that’s pretty much it at first. After you’ve hacked and slashed your way through a stage, collecting gold along the way, you’ll face a boss, either a mecha or a three-headed dragon that looks a bit like Gidra. Once you’ve beaten the boss, the hostage held in that stage will give you some kind of reward. Usually, it’s more gold or a healing item, but occasionally, the hostage will join you and allow you to use their services, such as the case with the nurse who will heal you whenever you visit her. 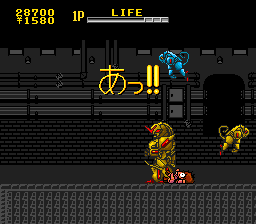 With the gold you get from enemies and hostages, you can buy upgrades from Doc. These upgrades can increase your maximum health, make your weapon stronger, or give you the power to charge energy and unleash the Schbibin Buster, a powerful beam that can also be upgraded. This element of upgradability is great and all, but the gameplay is still almost brought down by a crippling flaw. The jump control is horrible. It’s very sluggish, somewhat unresponsive, and you always seem to fall short of your targeted landing point.

Schbibinman looks pretty sweet for a game as old as it is. While most early PC Engine games didn’t look much better than games you’d normally see on NES, Master System, or MSX, Schbibinman looks more akin to a Genesis or an early SNES game. The color palette is vibrant, the sprites are pretty and have a decent amount of animation, and the overall atmosphere of the game is nice. The only glaring problem is that the same three stage motifs are constantly reused until you reach Dark Skull’s lair. 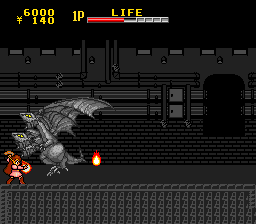 Schbibinman also has some really catchy music for a HuCard game. Even though the same three tunes are used over and over, it’s really hard to get tired of them. There’s even some rather clear voice samples for Tasuke and Kyapiko, something of a rarity for non-CD games of the era.