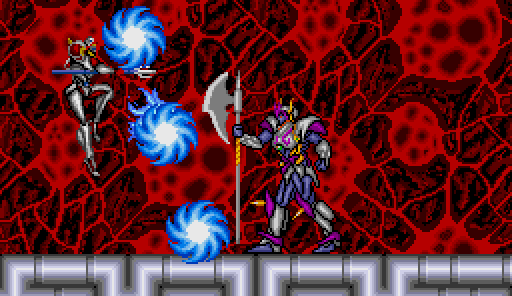 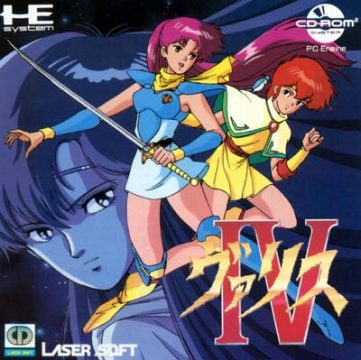 Over the course of three games, the Valis series had gotten a bit narratively stale. Each time another demon of the week threatened Vecanti and the real world, and Yuko had to go and take them out. So to shake things up a bit, Laser Soft replaced the heroine and… told exactly the same kind of story once more. Since Yuko had mysteriously disappeared at the end of the third episode, a generation has passed, and the new protagonist is a young Vecanti woman named Lena. The three heroines from the previous game still appear, and they have aged visibly. Valna is kidnapped by the new demonic tyrant Gallagher, while Cham leads the resistance against him. Yuko is revealed to have turned into a goddess, and she awaits to put Lena through a test that will make her the next Valis Soldier.

The game retains the feature with the three switchable characters from Valis III, and this time they play much more distinctively. Lena plays exactly like Yuko did before, so she attacks with a sword and can slide on the ground. Her tomboyish sister Amu has a boomerang-like weapon that flies in strange angles, and she can double jump. Asfal is actually Gallagher’s father, but he still wants to put an end to his son’s reign. As a demon, he is very big and bulky, and can walk right through hazards like spikes and energy barriers without getting hurt. His attack shoots blue wolf heads that slide over the ground and thus cannot hit flying enemies, but they are very destructive. 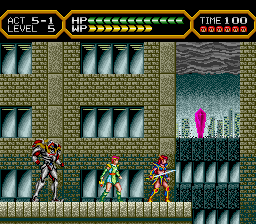 Each character also has a different attack spell, which requires a meter to charge up, but each time the player gets hit, it is reset to zero. Once the meter is fully upgraded, the spell can be cast in three different strengths. The most powerful variant is a devastating, more or less screen-filling attack, but the meter is always downgraded again after using it. 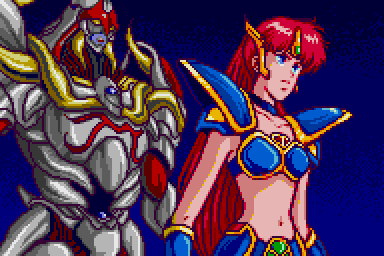 Since the three characters play so differently now, there’s a lot of annoying switching around to match the different situations, and with most enemies one particular character is much more suited to defeat them than the others. Accidentally switching to the wrong one can get a bit frustrating, especially for the boss fights, where the player is once again stuck with whatever character triggered the fight. The game is also a bit too long for its own good – it has nine large acts, each of which consists of numerous sub-stages, so it can easily get repetitive. The hidden hard mode has even two more stages added on top of those. As a whole, Valis IV is not quite as good as its immediate predecessor, but still one of the better games in the series. 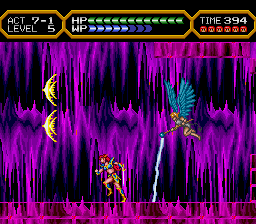 It also doesn’t look quite as good as Valis III. The enemies might actually be a bit more detailed, but most of the stages look really drab and boring. The music is an odd mix of different styles one wouldn’t expect to hear in a game like this, which in this case is not necessarily a good thing. Valis IV was also never released in the West, which on one hand spares us another terrible English dub, but also means that much of the plot is lost to non-Japanese speakers.