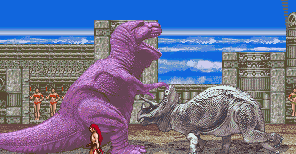 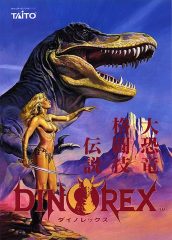 The release of Capcom’s Street Fighter II in 1991 caused the arcade scene to be flooded with a huge number of clones. Taito’s Dino Rex is the first to come out of the company, and is actually more ambitious than most, being that it features gigantic dinosaurs slugging it out, rather than the usual roster of karate guys and gals. Released in 1992, it might be easy to surmise it was influenced by Jurassic Park, being the film that sparked a dinosaur craze for at least a few years, but that movie came a year later. More likely, it was inspired by the works of Ray Harryhausen and any number of classic stop-motion monster movies from the 60s. It also predated Atari’s similarly themed Primal Rage by two years.

Dino Rex features six different dinosaurs to choose from – Tyrannosaurus, Triceratops, Allosaurus, Pachycephalosaurus, Ceratosaurus and Stygimoloch. Each one has a unique special move, which is difficult to pull off but helpfully illustrated on the player select screen. There are only two attack buttons, with one for “punches” and the other for “kicks” (though the latter is more often used for tail swipes).

Among Street Fighter II clones, Dino Rex is also one of the earliest to have a special power meter. By pressing both attack buttons at the same time, you’ll lunge at your opponent and begin a combo, consuming one of your power bars. Continually jamming on the buttons will extend the combo, which will send the other player flying across the screen twice more. You begin each match with the power gauge at max, but once used it can be replenished by roaring, which is done by holding Up on the joystick.

Executing these combos is a major part of Dino Rex, because the fighting is nearly impossible, otherwise. There’s an inherent problem when all of your fighters have such stubby limbs, that merely hitting your opponent feels like an act of God, especially combined with the shoddy hit detection. It doesn’t help that the controls are strange and unresponsive. Outside of special attacks, you can only jump straight upwards, and that’s done by pressing down then up, which isn’t exactly intuitive.

The game simply doesn’t allow for fighters to turn around, either. If you end up on the other side of your opponent, the game briefly disables the controls while the two dinosaurs shuffle back on their respective sides before resuming battle. The enemy AI also has an obnoxious tendency to knock you down and attack when you’re helpless on the ground, which can only be escaped by mashing buttons. This happens a whole lot.

The visuals are a textbook definition of a mixed bag. The dinosaurs, which are digitized models, consist of only a few colors. What’s more, they’re often really ugly colors (dinosaurs just don’t have the same sense of menace when they’re purple). The T-Rex looks strangely obese, as if it had received a lifetime all-you-can-eat buffet membership and is just now living with the consequences. The animation is not only jerky, but also very, very strange. The Triceratops has a special move where it gets on its hind legs and walks forward, which looks like it’s slapping something. When it attacks an enemy on the ground, it looks like it’s humping them.

On the flip side, the backgrounds are extremely well illustrated, animated with humans cheering on the fight, complete with the trainers that command the dinosaurs from the sidelines. Stages are filled with little details, like the waterfall level that begins with a guy falling to his death for some reason, or the Pterodactyl that bites and flies off with the loser’s trainer. Each arena is filled with destructible objects, and the game often makes a spectacle of destruction, in spite of the graphics lacking in other areas.

There’s also a madcap plot tying everything loosely together, telling the story of you, a dinosaur trainer, working your way through a tournament to become the winner, the so-called “Dino Rex”. This is told with awkwardly translated English, along with fantasy artwork that while not plagiarized, certainly feels like it.

Every few stages, your trainer has a “dream” (typically brought on by some kind of hallucinogenic drink) where your dinosaur ends up in a modern day city. These are the bonus stages, where the goal is just to stomp forward and destroy cops, tanks, helicopters, buildings, and whatever else gets in your way. These dreams actually have their own B-story, as the leader of the city, Mr. Ho Lee, attempts to defend his citizens against your rampaging menace. This culminates in the final bonus stage, which takes place in the same prehistoric setting as the rest of the game, where you meet Mr. Ho Lee again, except he’s sitting on a pile of money and not wearing any pants. None of this is adequately explained, but it doesn’t really need to be. Also, at the end of each bonus stage, you’re rated on “Collopse of the civilization”, or how much damage you’ve caused.

After beating the T-Rex at the end of the game, the human trainers get into a one-on-one fight. Upon beating the computer, your character takes off his mask, revealing himself to be none other than Rastan (using the same sprite from Warrior Blade). Just another weird Taito tie-in.

At any rate, Dino Rex is pretty terrible. It’s just a bad fighting game that’s incredibly difficult to control, with poor collision detection and basically no sense of balance. That doesn’t mean it’s not impossible to enjoy – it’s just so strange that it’s hard not to admire its brazen weirdness. It was largely forgotten outside of its initial arcade release, but made an appearance on the Japan-only Taito Memories II Joukan for the PlayStation 2.

Dino Rex was developed by the same team as Gun Frontier and Metal Black, hence it sometimes being referred to as the last of the “Gun Frontier Trilogy”. The team probably should’ve stuck to making shoot-em-ups, but considering how quickly this game was probably shoveled out the door to capitalize on the fighting game craze, it’s hard to put too much blame on them.