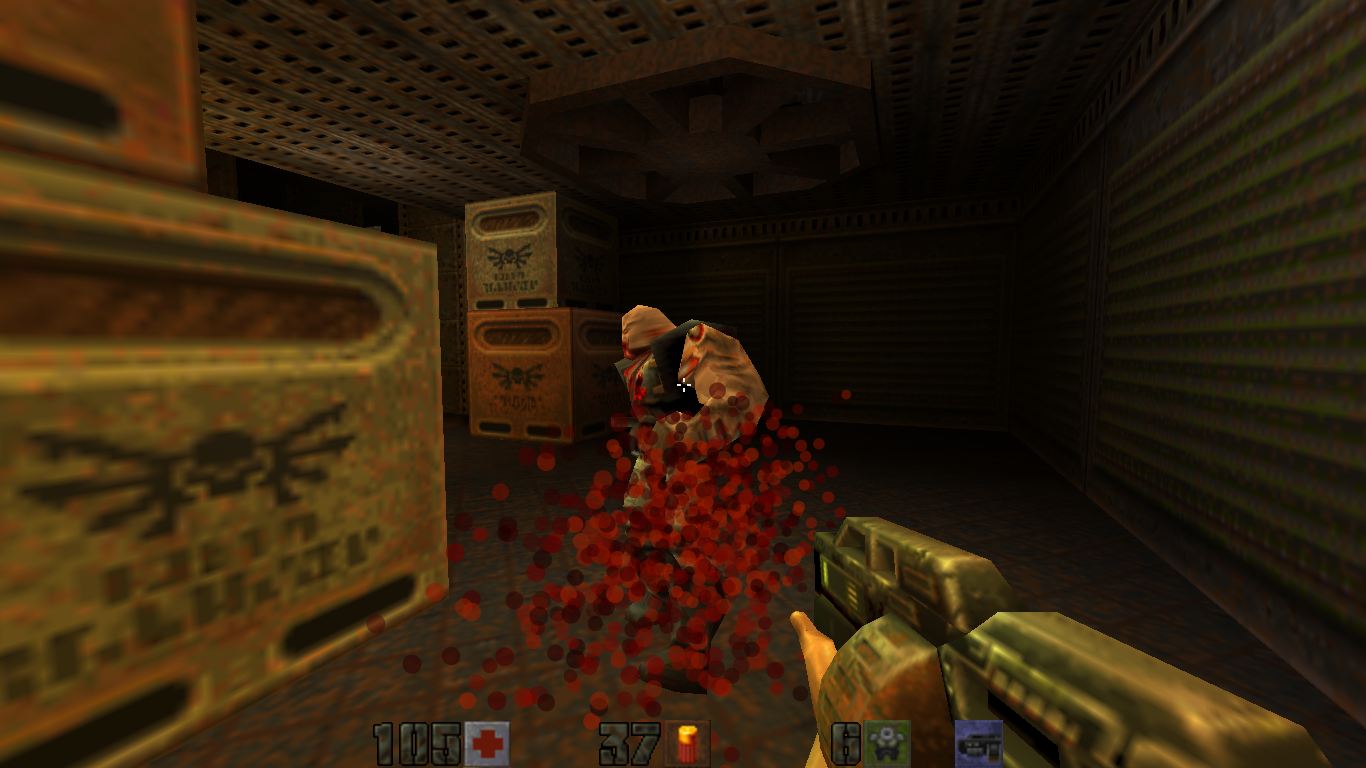 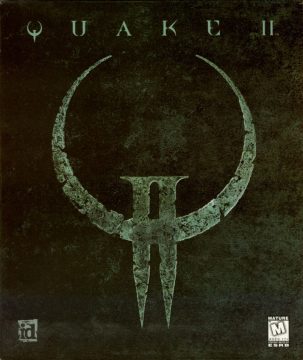 Screenshots taken were made with the source part Yamagi Quake II.

Shortly after Quake was done, Romero left id Software to found Ion Storm, and this marked a major culture shift for the company. Romero himself has said that with him gone, nobody was left to challenge Carmack on important decisions, and there seems to be some truth to that. This was definitely the Carmack era, where tech and Carmack’s own design interests tended to shape each project, but this initially allowed projects to come together much quicker. Adrian Carmack considers Quake II one of his favorite projects, partly due to how well development went from start to finish, in contrast to the first game’s frazzled development. 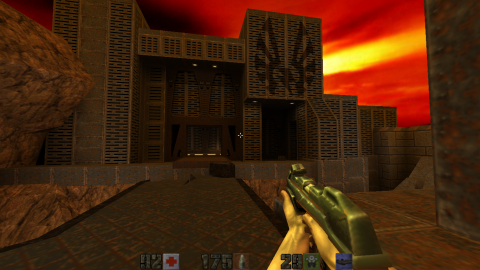 Problem is this quickly made sequel is probably the most forgettable game in the Quake franchise. It wasn’t particularly important in gaming history, making fairly minor improvements to the Quake engine to become the proper id Tech 2, the most noticeable being colored lightning, making the game feel less brown. It also didn’t change much in mechanics, even with all its new features and structure. What did change was how the game was designed, marking just how different this new era of id would be, but lacking the ability to execute on creative ambition the way later id games would.

One cool thing is that we now have a proper narrative structure, even if the story told is still mainly a plot skeleton. The horror tone of the last game has been tossed out for a sci-fi WWII shoot-em-up, with an army of space marines taking the fight to the planet of alien invaders who wrecked Earth. Said aliens are the Strogg, probably some of the most memorable villains in the id pantheon, a species that turns dead and living flesh of other races into cyborg abominations for their war machine. Your character, Bitterman, is the only marine to make it in alive, and you have to destroy the “Big Gun” to allow the invasion to go ahead as planned. Doing so involves shooting, explosions. 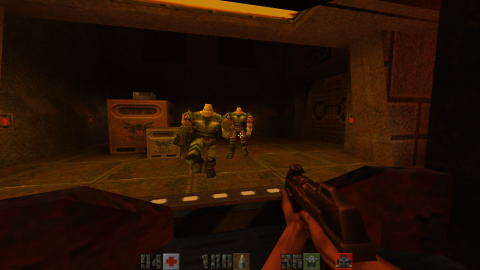 What this means for the game is that you now have mini-hubs that divide up the levels, given main and secondary objectives to guide you along and make you feel like you’re constantly working towards a larger goal. It’s a neat trick for this era that does add to the wartime atmosphere, though it comes at a cost. The map and art design suffered from the limited setting, meaning most of your time will be spent in warehouses and open dam/bridge areas that blend together very quickly. The industrial nature of the Strogg is captured, and very little else, kind of wasting the great body horror theme at the game’s center.

This shift in atmosphere is also the main known reason Trent Reznor bowed out of the project. It’s been said he thought the game had no atmosphere, though it’s more accurate to say it doesn’t have an atmosphere that fits Reznor’s style. He was replaced with the one person group Sonic Mayhem (who’d return for Quake III), whose hard rock and metal sound fits this particular game much better. Enough praise cannot be thrown at the track “Descent into Cerberon” in particular. It’s one of the first tracks that plays in the game and will be stuck in your head forever. The sound effects and score fit the world perfectly, so kudos there, even if what the art team could do with the theme was limited. 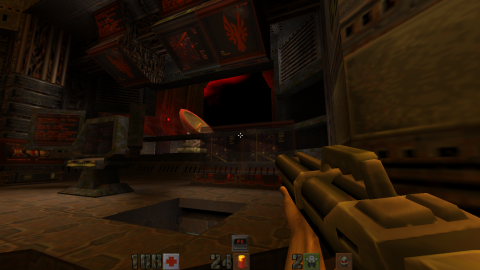 That said, level design overall is extremely forgettable. The game is not particularly difficult compared to other id shooters, due mainly to a lack of big surprises to deal with. It was designed in a way to let the player breeze through and enjoy it, with the few tricks present reused to the point of surprises no longer being surprises. You can only hide a berserker behind a corner so many times before people get wise to it. Even the big mob fights end up being fairly simple, most enemy types blending together, the most unique baddies not appearing too often. Now the parasite is a great enemy, the horrible tongue dog thing, but he’s not used as often as you’d expect. Besides the charging berserker, you’re mainly left with a variety of mooks, tanks, and hover bots and not much else.

Very few moments of Quake II stick out, but none of it is ever bad. You have a great set of weapons besides the garbage starting blaster (a pea shooter with a charge shot that became standard in a lot of id games, even DOOM 2016) like the monster of a chaingun, a fantastic super shotgun, and a returning BFG and the punishing and accurate railgun. Enemies are fun to shoot down, a great balance of aggressive and tricky. The minute to minute play is enjoyable, but actually remembering particular moments becomes difficult in retrospect. It’s not uncommon to get lost in some maps, trying to make out notable landmarks that become occasionally rare. The game doesn’t copy and paste maps, but it feels like it at times just because of how limited the world’s look is and the make-up of enemy mobs. 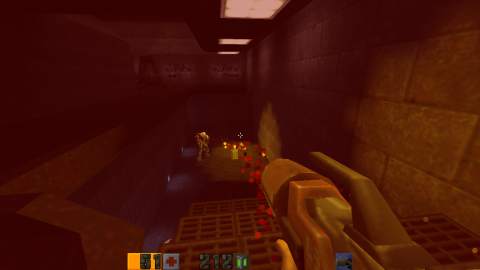 The few interesting bits amount to there being a weird cyber-pyramid or a jail themed area, maybe a laser barrier you have to take down. These help push the idea of moving closer to a larger goal, but they don’t make for fun, memorable gameplay challenges. They’re just weird elements of an otherwise forgettable environment, or minor road blocks ala colored doors and keycards. Strife, which came out a year earlier on id Tech 1, had more engaging game design overall with similar goals, even if its gunplay was less satisfying. Half-Life came out a year later and basically owned the entire genre with a similar structure, further highlighting the game’s faults.

Quake II is a game that exists and is certainly worth a play, but it’s not really a classic or anything. It lacks special aspect to it that makes it stand out, with possible exception to the music. Great deathmatching, impressive for the time tech, cool concept, fun weapons and combat, solid atmosphere, and extremely easy to have blur in your memories into a green, blue, and gray blob. What it did was done better elsewhere, and it wouldn’t be long before everyone else did what it did even better. It’s the ultimate middle of the road game only really sticking out at all for its place in the Quake franchise and how it fits into the history of id Software. 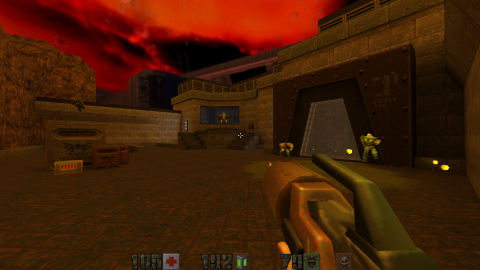 The mission packs are a bit more interesting, though, especially the first one from Xatrix (The Reckoning), then a very new studio. Their level design was much meaner, making their levels stick out more. Both packs also add more weapons, including mines, traps, and a gun with projectiles that bounce off walls. The second pack from Rogue Entertainment (Ground Zero) mainly adds old weapons with new names from the first Quake, the most interesting additions being DOOM‘s old chainsaw and a turret variant of the thunderbolt. 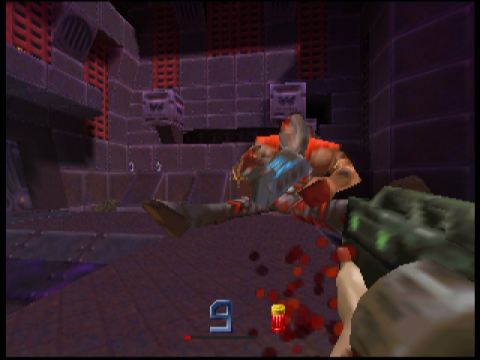 There was also a netpack with some extra maps for deathmatching and various other minor additions. Also worth mentioning the later released RTX source port from Nvidia available for free. It was a fairly recent tech demo that hasn’t been well received, making textures too detailed and shiny.

Console ports were made for the Nintendo 64 and PlayStation. The Nintendo 64 version has entirely new levels and some new lighting effects (noticeable on the gunfire) and has a new soundtrack by Aubrey Hodges (who also did the Doom PlayStation and Nintendo 64 OSTs), a sort of nightmarescape closer to the original game’s score with an industrial edge. The PlayStation version is closer to the PC version and runs on a different engine created by Hammerhead, who also created the PS1 shooter Shadow Master, and runs at a slightly-higher-than-normal resolution of 512×240. Many areas were redesigned to take into account the limitations of the system, including hallways that act as loading areas. The save function is limited to checkpoints as well. Rather impressively, the game supports four player splitscreen with the multi-tap – common on the N64 but rare on the PlayStation – and even offers PlayStation Mouse support. Music and cutscenes from the mission packs were also crammed into this port for some reason. There’s little reason to play these ports nowadays (outside of the different levels on the N64 version), but for the time, they’re well put together.

An Xbox 360 port was included as a bonus disc in the first print run of Quake 4. It’s a straight port of the PC version with some minor effects added, supporting up to 16 players (four per screen, along with system link). This obviously blows the other ports out of the water, though it’s also running on much more powerful hardware. 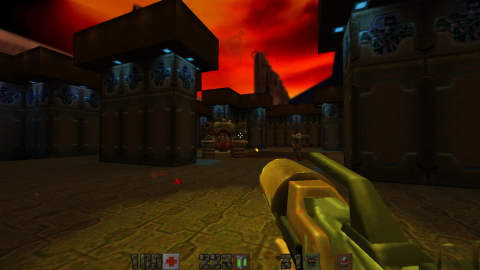 Quake II would end up being trumped by Unreal, one of the few games of the era with new tech that could actually rival id’s cutting edge stuff. You may known Unreal better these days as Epic’s extremely successful and robust engine that countless developers license for use. After that, 1999 would hit, and the trajectory of the series would change forever with arguably the most popular game in the franchise in terms of an active community. It was where the single player campaign became an after thought, and a movement towards the growing e-sports world began. This would be the first Quake to focus mainly on the deathmatching.