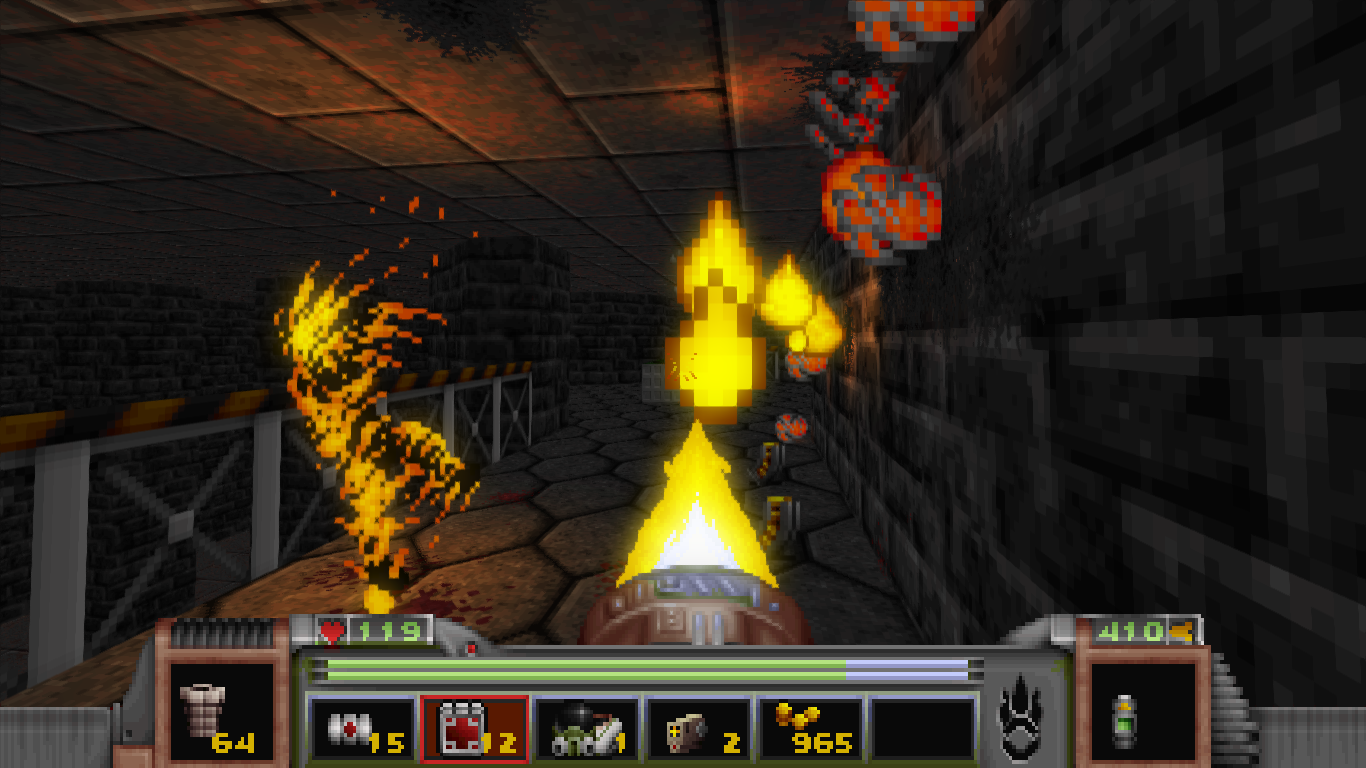 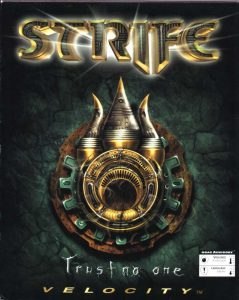 Note: Screenshots are taken from the 2014 Veteran Edition, which has enhanced graphical options.

On June 17th, 2000, Deus Ex was released and changed the gaming landscape. It merged first person shooting mechanics with RPG elements, creating a new type of game called an “immersive sim,” built from the early work of the System Shock series. It was designed to allow players to think and experiment with how to use the game systems in inventive new ways, taking two genres that shouldn’t function together at all and finding magic with them mixed. The funny thing is that Deus Ex may have finally established what had been building since 1994, but its unique blend of shooter and role playing had already been tried once before. Rogue Entertainment’s Strife, released in 1996, tried to do a lot of what Deus Ex accomplished on the DOOM engine (the id Tech 1, to be precise, and the last official released game made with it), and it actually had a fair bit of success. It’s nowhere near as good as arguably one of the best games ever made, of course, but it’s kind of amazing just how forward thinking it is in so many ways. 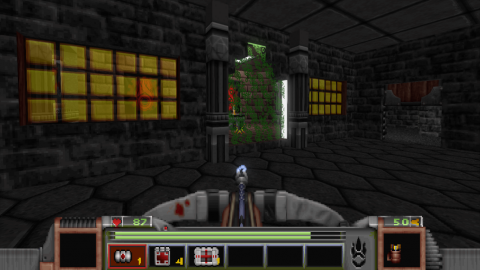 Strife‘s narrative is basically an edgy tabletop campaign. A horrible virus from a fallen comet is slowly destroying humanity, and a mysterious cult called the Order has come in and taken hold of the land. They use strange cybernetics and superior firepower to control the populace, but a resistance is growing and planning to take them down. There in enters you, a wandering merc who escapes capture and quickly finds themselves recruited into the resistance. The story initially begins with a series of small time missions to prepare for a siege, but then evolves into something more supernatural as you gain a piece of a powerful magical artifact that could end the conflict for good.

It shouldn’t be a surprise that a game from 1996 made in the DOOM engine isn’t particularly deep. Strife doesn’t do anything too new or inventive with its narrative, nor has much under the surface beyond some vague commentary on the use of science and knowledge. However, it sells the situation very well and makes an engaging adventure anyways. This is due partly to the use of comic art and the voice acting, which is all very cheesy but well delivered. You get the emotion of every character, and they leave an impression with a series of ridiculous accents, hiding that there were only three voice actors on staff. That comic art is also incredibly 90s while never reaching Liefeld levels, which keeps it nice to look at and gives all significant PCs a good deal of personality with just their portrait. Special mention must also be given to Morey Goldstein, a real deal sax player who worked as composer for the project. His music has a ton of variety and a great atmospheric feel to it a lot of titles at the time lacked, with a solid mix of pumped battle tunes and dread building melodies. He sadly passed away in 2005, but he left a surprisingly huge list of work in his wake. 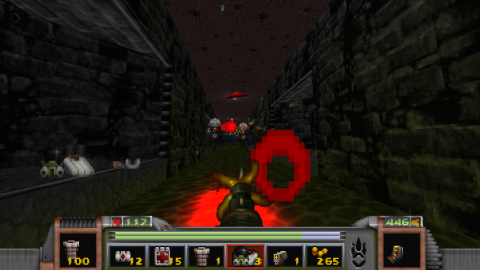 The story is sold further is the game’s structure. Like a proper RPG, the design of the game is based around what fits with the narrative, resulting in a very memorable first third. Strife actually begins with a series of missions where you’re just doing small deeds for the resistance, but those deeds add up. You have a long term goal of launching a siege, so none of these missions feel like a waste and put you in the mindset of a struggling resistance agent putting the pieces in places for a bigger play. That involves wheeling and dealing with other factions, doing some sabotage, and even launching a prison break to bolster the ranks. When the sigil weapon is introduced, a magical device the Order is obsessed with, you’ll feel like you’ve earned your position as the hero in the story, which is hard to pull off in a game like this. The stakes even raise properly, with more areas being crowded by tougher enemies as you go deeper in enemy territory.

The RPG set-up also has a very un-DOOM-like element in the inclusion of hub areas. In these places, the guards won’t attack you on spot, though they can be put into action mode easily on certain difficulties. Instead, you’re free to explore and visit shops to get ammo, armor, health items, and upgrades the various shops may be selling. This isn’t that central an element after the sigil plot starts, but it’s nice to know you can spend the gold you find on your missions to restock on supplies, and you may just find yourself doing that quite a bit. Strife may be a shooter/RPG hybrid, but it’s still a game running on the DOOM engine from 1996, and that brings with it all you would expect. The later areas get especially punishing with the sheer rush of enemies, with even the inquisitor enemy class introduced towards the end of the game being frightening in training difficulty by just how much ammo they can take while they pelt you with explosives. You’re going to NEED that gold just to keep stocked on basic necessities. 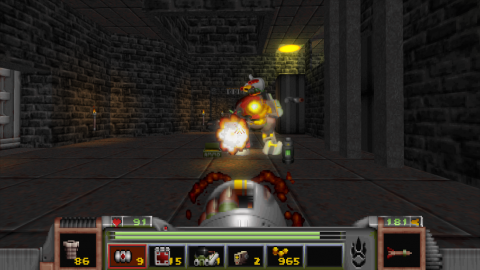 Another nice touch is the addition of side quests. There aren’t many of them, but they help add some extra flavor to the world, or simply allow for more challenges and chances at upgrades. The chalice quest early in the game stands out as an especially memorable one, if only for how doing it wrong can completely lock you out of the rest of the game (remember to make multiple save files!). As far as upgrades go, you can increase your accuracy (the likelihood to hit where you aim, which is slightly off at start for larger weapons) and stamina, usually by visiting the doctor and arms dealer in the resistance bases after completing a major mission. Some side quests also offer the same bonuses, encouraging plaything through them and exploring the world. There’s certainly a lot to explore, as the areas in this game are huge, creating mazes with dozens of detours and secrets to find in off colored walls and behind computer screens. The game can be finished in roughly seven or eight hours with a guide to help with navigation, but this also means missing out on a lot of extra stuff hidden around each area.

Actual combat is pretty much what you’d expect from any DOOM-like shooter, complete with dodging bullets and odd platforming, though the actual weapon selection is a bit weird. The knife and electric arrow starting weapons are both pitiful and will quickly be discarded from regular use, and the poison arrows only have very limited use if you want to use some stealth in parts to avoid tripping alarms. Of course, the game does force you to trip some alarms to progress, so the defining element of an immersive sim (non-lethal play) had yet to be explored or even considered fully. The machine gun is solid and accurate, the rocket launcher is weak but a great base weapon thanks to its high ammo capacity and firing rate, and the grenade launcher is one of the most punishing and satisfying weapons you’ll ever find in a DOOM-like. The flamethrower is a sadly limited weapon, thanks to mechanical enemies not being too affected by it, but the mauler you can unlock later in the game is a different story. It’s a shotgun style weapon that completely disinergrates whatever it finishes off in a satisfying little effect. It even gets an alternate fire mode that unleashes a huge charge shot that can make fast work of bosses and enemy gauntlets. The sigil is also interesting in that its ammo is your own health, shooting out lightning in an area and required to fight certain bosses in the second half. 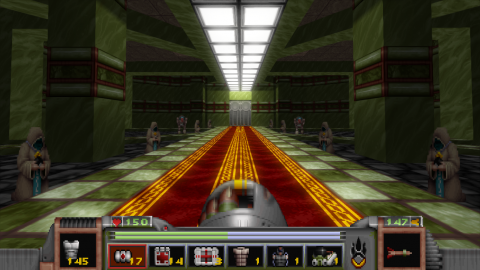 Strife basically vanished from the popular landscape as soon as it appeared, but it never really left completely. Once official support ended, modders from the DOOM mod community started to reverse-engineer the game and porting it around with various improvements, including new graphical options and proper mouse aiming. They even got the thing working on other systems, like the Amiga. That’s where the story of Strife should have ended, a neat little footnote upon the history of DOOM, but then a man named Stephen Kick entered the story.

Kick is the founder of Night Dive Studios, who might very well be one of the most significant figures in modern game preservation to date. Kick is responsible for System Shock 2‘s rights issues being settled, helping the game be resold in the modern era, and his studio has been very busy in rescuing various old PC games, including the entire catalog of Humongous Entertainment. For Strife, Kick and his group went above and beyond in their Veteran Edition remake. (It’s called a “remake” because the game is kind of impossible to port as it originally was – the source code had long vanished.) They basically tried to recreate the game as much as possible through using the Chocolate Strife mod (made by modder Samuel Villareal) and by hiring some of the original programmers to work on the project. They also improved on the original release, adding the various features modders had been experimenting with over the years and bringing the game to modern audiences. If not for all these efforts, it’s very possible Strife would have completely disappeared from the world, let alone be playable for modern audiences. 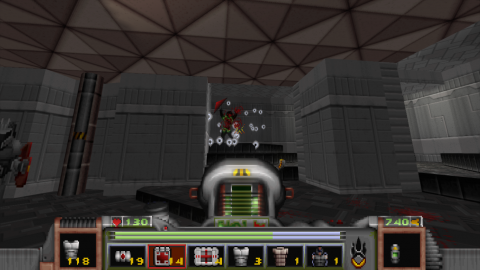 Strife was a game far ahead of its time. It combined mechanics and concepts thought impossible to make function in unison, but they did it and made a great first try. It would be a stretch to say the game was an influence on the later established immersive sim game (it’s doubtful Warren Spector was aware the game existed), but it predicted where things were headed four years before Deus Ex brought that future to the gaming world. Strife is the missing link between System Shock and Deus Ex, an example of an immersive sim before they fully existed, and clunky in its execution. There’s no stealth system to make stealth viable, and there aren’t really alternate solutions to a problem beyond what gun you want to finish a boss with (and even that is limited).

Even then, the game had multiple endings, NPCs you could converse with, secrets to find, and a real sense of involvement within the game world rare for the FPS genre at the time. Strife, as it was released, doesn’t really stand the test of time, but its the rare game that got a second chance to shine, and it did so quite well. Further more, the game is proof that game preservation probably isn’t going to happen within the industry. If not for the modders so obsessed with it, a remake would have effectively been impossible. If we want games to keep living, we’re going to have to do the heavy lifting, and those dedicated modders and the heads of Night Dive Studios are doing just that. The gaming landscape would have been lesser without knowledge of this mid-90s oddity, one that did so much beyond what anyone thought was possible and pre-dated the big movers and shakers. It’s a must play for anyone even remotely interested in the history of FPSes, immersive sims, DOOM, or just gaming historians in general.