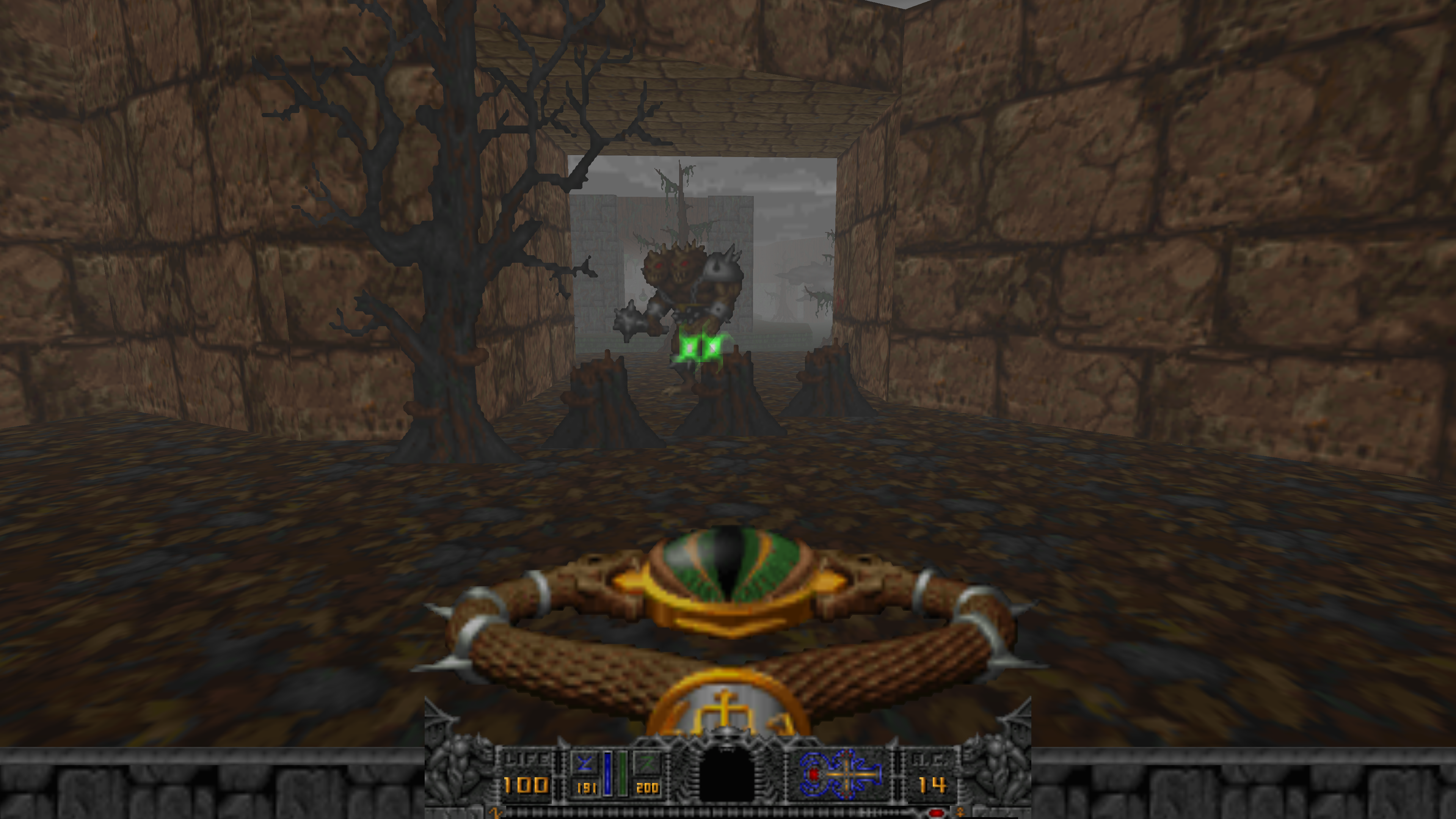 Nineteen months after the release of Heretic, another evolution in the FPS genre and Doom’s 2.5D engine was released continuing the Serpent Rider trilogy.  Hexen: Beyond Heretic took one step forward and two steps sideways in the evolution of the dark fantasy FPS

Heretic chronicles the destruction of D’Sparil, the first of the Serpent Riders, at the hands of an elven hero named Corvus.  Hexen shifts our focus Beyond Heretic (cough) to Cronos, a human world where the second Serpent Rider, Korax has control of something called the Chaos Sphere and is described in the manual as having a “lust for power only matched by his hatred for all living things not under his control”. 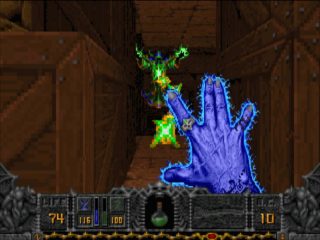 This is the best the Doom engine has ever looked as it is used to create atmospheric storytelling to sell the Dark Fantasy setting.  The first door in the game doesn’t just open, it creeks.  Switches shift entire sections of walls in ways that feel like the coolest Dungeons and Dragons traps.  A giant bell at the top of a tower rings to reveal a teleporter.  Hexen’s buildings have as much character as the creatures roaming them and are vital to setting the atmosphere.   Whereas Heretic often felt like a coat of Dark Fantasy Paint™ over a Doom game, Hexen feels like a more realized vision of the original concept.

Hexen sometimes feels like wants to be a Doom and Dungeons and Dragons (D&D&D?) campaign, and in some ways it succeeds. By no means a role playing game, Hexen does provide choice, or at least, the illusion of choice, through its hub level design, inventory system and its character select.  It mixes those RPG-esque elements with the rapid pace and brutality of the FPS genre and creates something fairly unique for the time.

Upon starting the game, players are given the choice between three character classes.  The Fighter, Cleric and Mage.  Ammo in Hexen is measured in green and blue mana pickups and each class of character has four unique weapons.  The first weapon for each character uses no mana, the second; blue, the third; green and the ultimate weapon for each character expends both at the same time. The difference in each character can be felt in the way you play and the way Mana is used is a very inventive iteration on the FPS formula at the time. 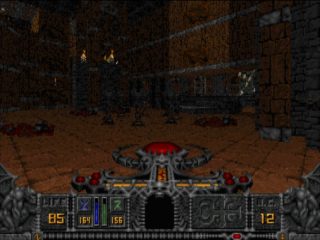 The three character classes have unique strength, armor and magic ratings which change the way they interact in combat and for a game from 1994 at the height of the 2.5D FPS genre, this is pretty damn cool on the surface.  Ultimately, however, the way a character causes damage in combat feels different for each class, the way those classes respond to the levels and puzzles doesn’t change and it makes the replayability of each character class only appealing to the most dedicated.

The core level loops here innovate for better and worse on the typical Doom engine model by shifting from key finding within a contained level leading to an exit.  Hexen introduces hubs, each linking to a number of levels that must be explored.  There are five hubs in the game, each with an average of five maps, one which was hidden.  Players can go in and out of levels in each hub as if they are one giant area.  Activate a switch in one level and it will unlock access in another.  Find the key item in each level and it will open up the next hub, and so on.

The opportunity to move between levels through a central hub makes the world’s feel more interconnected and as a part of a whole.  In practice it can lead to some frustration and confusion as to how to complete hub areas, which key items have been found and where and on occasion a player can find themselves stuck not sure as to where to go next. 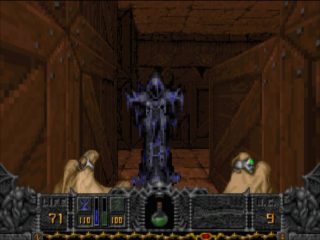 With both the visuals and audio Hexen embraces the dark fantasy setting and produces one of the finest looking and sounding games on the Doom engine.  Doors creaking, swirling leaves, ambient hoots and screams all combine to make the world feel that much more alive.   The stained glass adds some really beautiful color to the opening levels and can all be satisfyingly smashed. The music, done by Kevin Schilder, are standard dark, atmospheric tunes which work for the environment but do not stand out as anything memorable.  They are notable as Hexen could play tracks in Redbook audio format from the CD itself, improving the overall quality of the recordings, whereas Heretic and Doom used MIDI tracks.

The game is around 10 hours to complete and ends in a final battle with Korax he attacks with six projectiles at a time and the ability to teleport.  Once defeated we receive the chaos sphere and we are warned there are other players mightier who are still plotting their next move.

We would only need to wait until 1996 to find out when Hexen: Deathkings of the Dark Citadel was released. Deathkings contains three additional hubs set in the Realm of the Dead, in which the player must fight through and find their way home.  The expansion contained 20 single player maps and an additional six deathmatch maps.  There are no new weapons, characters or enemies, however the difficulty is spiked (as you would expect with a mid-90s FPS expansion).  It’s a very big expansion adding an additional 10 hours to the game, but with nothing new beyond difficulty and new levels,  The final bosses of Deathkings are clones of the three main character choices, Fighter, Cleric and Mage) along with waves of monsters in an arena style level.

Hexen, like Heretic before it includes a multiplayer over LAN for four players.  It can be played cooperatively or through deathmatch.  The Deathkings expansion pack was the first game at the time to allow eight players through Lan.  Nowadays it can still be done, but not without some work.  Zandronum is a source port with a focus on multiplayer support.  Hamachi works well as a way to replicate LAN support through the Internet as well.

Hexen was released on the three major consoles of the era, the Sega Saturn (April 1997), Sony PlayStation (March 1997) and Nintendo 64 (May 1997), all published by GT Interactive.  By the time of its release on console, Quake was already out and the FPS genre had taken a leap into a world that made the game seem that much more archaic.  The game looks identical to the IBM PC version, but suffers significant slow down and frame rate drop on the PS1 and Saturn. The PS1 and Saturn versions adds pre-rendered cutscenes to the beginning, end and between hub areas, that add significantly to the otherwise minimal storytelling. 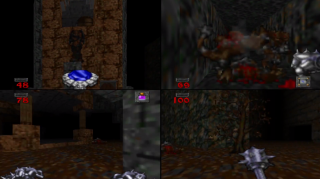 The N64 version is the best of the console ports.  Developed by Software Creations, it drops the FMV and CD quality audio due to the limitations of the cartridge, but it manages to retain and match the frame rates and graphic quality of the PC release.  It also features up to four player split screen cooperative and deathmatch modes, unique to the Nintendo 64 release.

Reception to the release of Hexen: Beyond Heretic can be traced in a timeline of before Quake and after Quake.  Its initial release on PC, in the time before Quake was praised for the advances it made to the Doom engine and the creative take on the FPS genre.  Its console ports, released in a time after Quake are relentlessly criticized for their stale take on the genre.  Electronic Gaming Monthly gave it its coveted, and only, “Game that Should’ve Stayed on the PC” award in 1997, proving the attempts to capitalize on its PC popularity in 1997 was a misstep for the team.

The source code for Hexen, much like Heretic was released to the public under a general public license in 2008 and since then has been ported to Linux, Amiga OS and OS/2 systems.  The game can be purchased, along with its expansion through major retailers and plays well through DOSBox emulation on a modern system.  At the time of this writing it is worth noting that the Steam version of Deathkings does not include the music, though there are workarounds to have it included.  The GOG.com version has functioning music in the latest version of the game.  Without a doubt the best way to play Hexen is within the Doom Source port engines like GZDoom and others.  It looks better, controls better and is simply a better version of the same game.  The classic look is there for those who want it, but with the size and resolution of modern monitors it can be painful to stretch the original sprites to sizes that didn’t exist when the game was released.

Hexen sold well, shipping over a million copies of the game on its four release platforms.  It’s a unique and innovative take on the FPS genre and the the Doom engine, one that would be usurped and made to look ancient with the release of Quake.  Its combination of RPG-light elements with hub worlds was a fitting growth for the Serpent Rider trilogy.  Hexen can be confusing, a little circular and occasionally frustrating but its bones are good and any fan of the genre can see what bred it and where it would lead us.

WWF In Your House