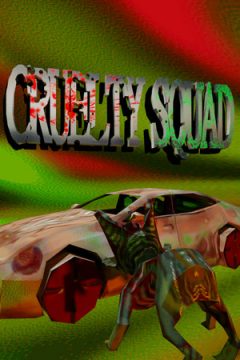 Cruelty Squad is an absolute marvel of a video game. As of writing, the game has garnered an absurdly impressive following on Steam, with over 2000 reviews overwhelmingly positive, and most of them are actual reviews! For an indie game from a complete unknown (Finnish artist Ville Kallio) without a publisher behind them to get that much attention is almost unheard of these days. Sure, getting praise from both the developer of Dusk and the CEO of New Blood Interactive helps, but Cruelty Squad has become a cult obsession for the simple reason of its wild, aggressive style and themes and just how amazingly good it actually is to play, despite looking like… well, like Cruelty Squad. 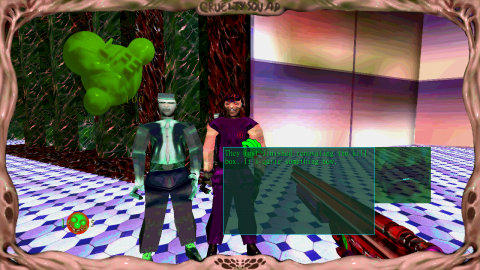 Cruelty Squad has extremely simple polygonal graphics and cheaply textured flat walls decorating it, alongside animations that make the original Quake seem advanced. It’s all intentional and plays into the game’s incredible disgust it has for you.

The game takes place in a dystopian corporatocracy, as the story starts with your character moping in the shower. He’s then called by a friend, who signs him up for a gig work mercenary job on the Cruelty Squad running black ops. You control this sad sack of crap who is only good at murder, but can die very quickly from even the smallest amount of sustained fire. It is the anti-power fantasy, and the entire game feels actively hostile to you, even using horror elements with the bizarre monsters and architecture you find, or even just touches like dark areas having no music.

It’s not too different from Deus Ex mechanically, but here, your body augmentations are gross things like putting holes in your feet that fart gore to make you fly. Die too much, and you get a disgusting face and the ability to eat human flesh for one health point. It is actually expected you kill civilians because, if you pay close attention, especially to the fact that there’s a mission replay, you realize nobody in this universe actually dies (sort of). Well, don’t worry about it, just kick their limp bodies to watch them explode into flying bloody chunks and get those tasty livers to sell on the black market, which is visited on a menu. Buy and sell stocks, get into the super fleshed-out fishing minigame, find hidden weapons and augmentations, and activate punishment mode to regain your divine light! Buy a house, which is a pointless level! Buy a tuxedo! It serves no purpose, but some people will think you are fancy. 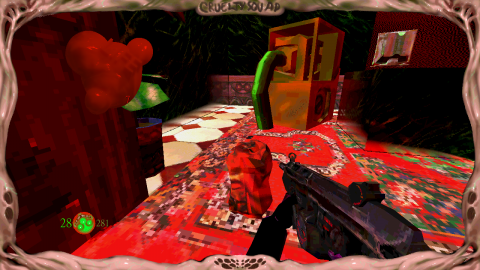 Just watch out for mean traps that leave you in an inescapable pit or sic flesh rats at you. Don’t worry, they don’t eat flesh, they just poison you really fast. Cruelty Squad is a mean game, but you get the tools for those situations eventually, which makes coming back for better rankings way more satisfying. Search around and you’ll find all sorts of stuff, and the sheer amount of hidden paths in these large maps is absurd. It’s not just the expected stuff, like vents and such, but secrets locked behind certain abilities and powers. There is so much to find and do, and that’s not even getting into the mess of mechanics purposefully hidden from the player to discover themselves with experimentation. Like, that strange looking border around the screen? That is extremely important for getting the true ending, no joke.

Oh, and be warned this game controls super weirdly by default. It’s recommend you change crouch to a button that a human would actually use before you start and keep everything the same. See, you don’t reload with R, but hold the right mouse button and bring your mouse down, causing your gun to lower to a certain marked level to be reloaded. R is now the use key because Q and E are the lean keys. No mouse wheel weapon switching, only the 1 and 2 buttons, with 3 activating an augmentation attack. You are forced to learn a counterintuitive control scheme early in the game, where you’ll often press the wrong button due to Cruelty Squad breaking all modern control norms beyond normal WASD movement, which makes all the wild stuff you can do late game all the more satisfying yet disgusting, like the rope made of your own intestines. 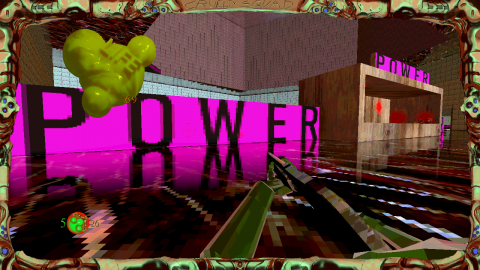 Cruelty Squad is off-putting yet addictive. It knows what it is and wants you to appreciate it for that – or possibly doesn’t care that much to begin with. It is a deeply nihilistic game with themes around life and death that border on Kafkaesque. It’s not just that life is cheap because capitalism, it’s that life itself has grown into a cancer that can’t be stopped. It’s a world where nothing has any real value anymore, and everyone is going mad because of it – or in some cases, becoming meat cubes and other abominations. It is a sick laugh at a broken world, and it’s kind of refreshing. While a lot of shooters like this tend to just lean into edgy vapidness for style, Cruelty Squad has a point, and despite its meme obsessed fanbase would have you believe, it’s a genuine work of art that leaves you different then when you found it. 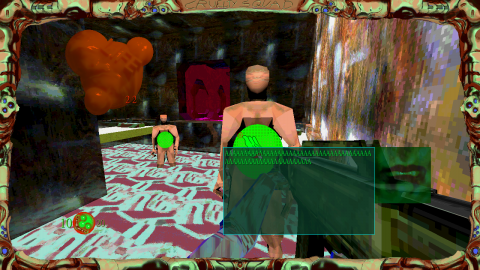 This one is the real deal, a game that keeps some key good bits of game design and throws out everything else to create an experience unlike anything else. Cruelty Squad keeps the spirit of the original immersive sims alive with the aesthetics of experimental 90s PC games and a helping of existential dread, and the vibe of a “crass weird uncle not invited to the family gatherings”. After all, if reality is gonna be a sick joke, you might as well meet it back with your own.