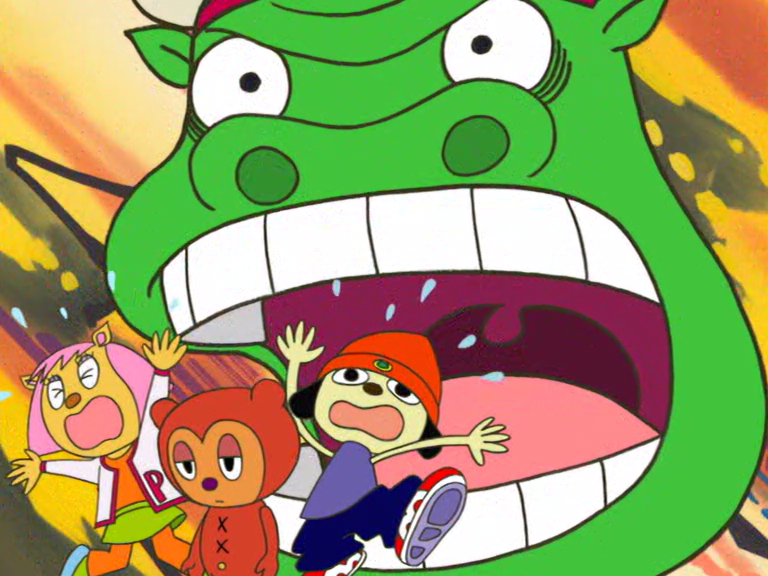 Um Jammer Lammy enjoyed a lot of promotion in the build up to its release, including a pair of albums: MilkCan – Make it Sweet! and PJ & Parappa – I Scream! While these feature songs from the game, these weren’t your standard soundtrack releases but unique arrangement albums styled after the playable characters. Make it Sweet! rearranges many of the Lammy‘s songs (pulled from stages and cutscenes) as if they were being played by the band MilkCan, while I Scream! remixes the songs to include full-length raps from Parappa.

While the arrangements are largely the same as their in-game equivalents, the albums give them new touches like having Katy Kat singing Lammy’s songs and PJ rapping alongside Parappa. Like the PaRappa games, they’re goofy but are very likeable thanks to the earnestness of the performers and the quality of the songs. If you like the music in Lammy, these are definitely worth checking out. 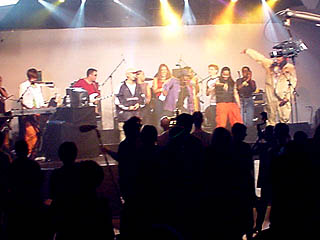 As an aside, many of these arrangements and remixes were featured in a concert performed by the game’s composers and performers for Lammy‘s launch party at The Roxy nightclub in New York. A low-quality recording is all that’s available at the moment, but if you ever wanted to see Dred Foxx and Ryu Watabe rap “Chop Chop Master Onion” live, you know where to look now! 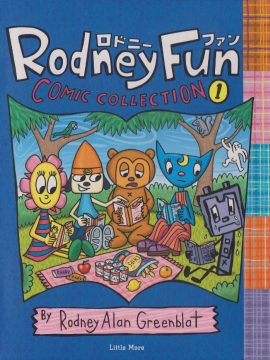 Rodney A. Greenblat has a long history with the PaRappa characters: he’s not only the series’ character designer, but he had actually designed PJ, Katy and Sunny for other projects that the team at NanaOn-Sha used for the games. In 2000, he also released a one-off collection of comics called RodneyFun Comic Collection 1 (despite the number implying multiple volumes, this is all he did).

The collection comprises five books, each one dealing with a different character from PaRappa along with a new character called Square E Bear. The first four are light-hearted stories about PJ’s daily life and dreams of being a benevolent king, Sunny’s attempts to host a polite tea party with limited ingredients, Katy winning a shopping spree lottery, and Parappa trying to get a job to afford a new game. The last book is more of an art collection unrelated to PaRappa, full of drawings featuring Square E Bear and other characters by Greenblat.

The stories are very charming and down-to-earth, featuring the characters going about their regular lives and coming up against relatable, if eccentrically portrayed, problems. Tonally, these comics come much closer to the feeling of the original game than any other part of the series, and are very much worth checking out if you preferred that tone.

They’re also a delight when it comes to the artwork, which is pure Greenblat in how earnestly carefree the drawings are. Even the most minor of expressions or random side-characters are incredibly endearing to look at, and despite the collection only releasing in Japan, the comics are written in English with Japanese translations of the dialogue underneath the panels, so you don’t need to know Japanese to enjoy these. Even the last book about Square E Bear, though lacking any conventional narrative apart from a purely visual story midway through, is full of striking pages that convey a strong mood of something very specific (albeit hard to articulate). 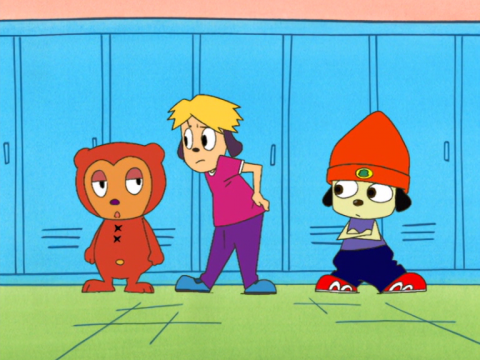 To tie into the release of the sequel and increase merchandise sales, it was decided to make a PaRappa the Rapper anime that would air around the same time. Directed by Hiroaki Sakurai, the series is a lighthearted comedy focused on the day-to-day adventures of PaRappa, Sunny, PJ and Kat. There’s also new characters, such as their friends Matt & Paula and local troublemakers Gaster and Groober, who were designed for the show by Rodney Greenblat. Greenblat’s designs fit perfectly alongside the original characters, and he’s not the only member of the games’ creators to get involved in the presentation. The soundtrack was handled by Masaya Matsuura and Yoshihisa Suzuki (along with newcomer Yasushi Kurobane), and does a great job at providing well-composed, catchy music that suit a variety of moods and situations.

This anime marks the first time that the characters were voiced in Japanese, and the cast fits them quite well. Parappa himself is voiced by Miyu Irino, best known for voicing Sora in Kingdom Hearts. In regards to the animation, the characters are rendered in a more three-dimensional manner, which can look a little weird when seeing characters like Katy from the side. However, it generally looks fine for the most part and is backed up by some lovely background art, even if there’s not much in the way of interesting storyboarding and movement is minimal (apart from a handful of episodes that have more stylized, dynamic poses and animation).

In terms of how well it captures the spirit of the games, it’s a mixed bag. Some people will take umbrage with the lack of rapping, and how the characters are suddenly kids attending school (which comes from the show being aimed at children to sell toys). On the other hand, the characters frequently getting into wacky, often absurdist situations that quickly grow out of control does make the show pretty close to what Lammy and PaRappa 2 were doing. While it’s unfortunate that the crew also avoided the eccentric but simple tone of the original, a ridiculous comedy could be a pretty enjoyable watch.

Sadly, this doesn’t pan out in execution. The main characters are quite vaguely defined in their personalities, which means the show can’t come up with plots based on character traits. Instead, it has to invent random shenanigans and resort to over-reactions, pace-breaking daydreams and repetition to pad out some fairly banal stories. While there’s occasionally a decent gag (usually involving Gaster and Groober’s outrageous schemes), the series often feels like a drag. Unless you’re really into seeing Parappa and the gang get into silly antics, it’s difficult to recommend beyond what Greenblat, Matsuura, Suzuki and Kurobane contributed.

The series didn’t seem to resonate much at the time. Despite being placed in a prime-time slot, it kept getting pre-empted by baseball games, and only ran for 30 episodes. It wasn’t localized for any kind of overseas release, and apart from the anime characters reappearing in PJ Berri’s Munching Mumbling and featuring in a Desktop Accessories CD where they were rendered in PaRappa 2‘s artstyle, it hasn’t had much reach apart from the popularity of its first OP theme “Love Together”. 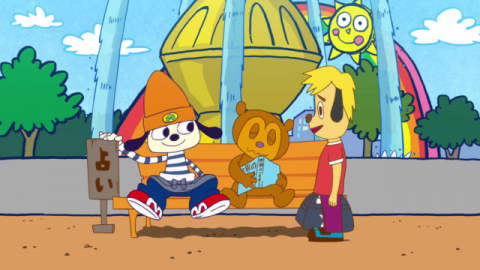 Out of the blue, a second animated adaptation appeared in 2016 to celebrate the series’ 20th anniversary and the anime’s 15th anniversary, along with drumming up hype for the original’s PS4 port in Japan. PJ Berri’s Munching Mumbling was a series of short segments, most of which aired as part of Fuji TV’s Hi Poul programming block, largely focused on PJ’s lackadaisical life and giving advice to his friends and customers at the local café.

In terms of presentation, there isn’t much to say. While the voice actors are new to this series, they fit the characters and deliver some fine if forgettable performances. The animation is considerably more limited than the anime, with the second season often featuring tweening (automatic in-betweening for the key poses), but the color schemes and drawings end up being more true to Greenblat’s artwork.

As each segment is only a few minutes long, most of them base their humor from PJ’s sleepy demeanor and never-ending hunger, though a couple of them focus on Parappa. It’s very straightforward in that sense, and its slow pace makes for a refreshing change from the sometimes manic TV series. However, it’s a series where the jokes about PJ being tired and greedy tend to be the only jokes in any given segment, and your enjoyment of it will depends on how much you like those jokes.

It seemed to be popular enough, seeing how it got a second season of segments in 2017. But that seems to be about it, otherwise. While the series can be found online, it’s often through unsubbed collections or YouTube videos, and attempting to view it through Fuji TV’s website requires a subscription. It’s not a noteworthy series of shorts in terms of quality or historical value, but seeking them out is more difficult than necessary. 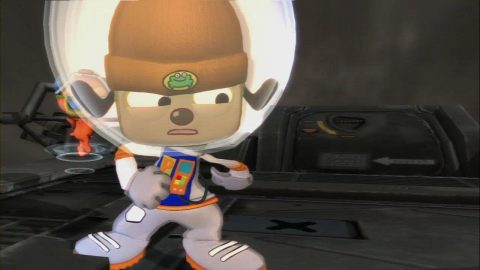 While there hasn’t been a new PaRappa game in years, the character did reappear as a playable character in the crossover fighter PlayStation All-Stars Battle Royale, along with a stage based on Chop Chop Master Onion’s Dojo. Presentation-wise, it’s nice to hear Dred Foxx as Parappa again, and he’s rendered in his usual paper-thin style convincingly well, though the attempt at shading his colors to fit in with the rest of the game makes the design look fairly gauche. However, his moves are largely generic and only really utilize a skateboard and his boom box for certain attacks, with his super moves being the only notable exceptions to this. His campaign’s quite forgettable, only featuring a pair of very short slideshow cutscenes at the beginning and end about his desire to be a hero. 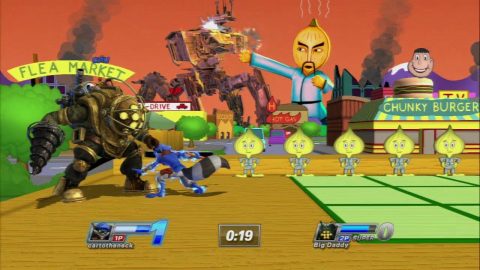 A write-up on the above concert by one of the attendees – https://www.ign.com/articles/1999/09/01/jamming-with-the-lamb-at-the-roxy