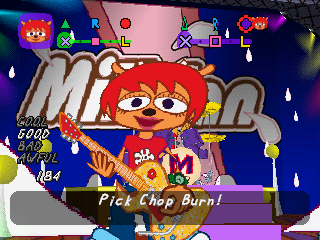 While PaRappa the Rapper proved to be quite popular, selling three million copies and gaining a notable cult following, its developer NanaOn-Sha wouldn’t make a direct sequel to it for quite some time. Instead, they created a sister game called Um Jammer Lammy, which reused the same gameplay with a new twist. As siblings, Lammy is the inverse of PaRappa in not just premise but in execution: a mechanically superior game that doesn’t quite have the same charm.

Lammy’s a young lamb who’s usually very shy and reserved, but put a guitar in her hands and she gains enough confidence to rock out with everything she’s got. With her friends Katy Kat and Ma-san, she plays the guitar for the band MilkCan, which is gearing up to have a concert. However, Lammy overslept on the day of the concert and has only 15 minutes to get there, which is much easier said than done when seemingly everything under the sun keeps stopping her. But as long as she imagines herself with a guitar to keep her spirits up, she might just be able to reach the concert in time. During her adventures, she’ll put out a fire with the help of Chief Puddle, learn how to put babies to sleep in a nursery led by Cathy Piller, flies a plane with the clumsy, schizophrenic Captain Fussenpepper, learns logging from Paul Chuck, and either ends up in hell or on a tropical island and puts on a convert with the diva Teriyaki Yoko. 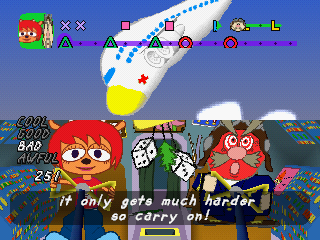 Um Jammer Lammy features the same gameplay as PaRappa in that you repeat lines given to you by your “teacher”, though you play them on guitar instead of rapping them. While mostly the same, there’s a handful of tweaks that have been made. For starters, the line at the top of the screen has been modified so you can see exactly where the teacher’s lines and your lines are, which makes it easier to see when it’s your turn and to prepare for it.

In addition, your rank changes if you pull off or screw up any two lines in a row, instead of the “first line in a pair” system used in PaRappa. This does make things more difficult in some respects, but it also allows you to recover more easily. From stage two onwards, you’ll unlock guitar modifiers after beating each stage, such as distortion, reverb and a harmonizer. These can be toggled by pressing Select, though they don’t do much else besides giving you extra incentive to replay stages.

However, the most obvious difference is that Lammy is more complex. The button patterns are more complicated and frequently change from line to line, the pace is a lot faster, and some stages such as three, four and especially six will really test your skills at both hitting the notes and freestyling. Considering PaRappa‘s issues with registering your inputs, this sounds like a recipe for an obscenely unfair and demanding game, but it’s not.

Lammy corrects PaRappa‘s biggest flaw by recognizing your inputs more generously and consistently. While the game still encourages you to freestyle to break out of a botched line, it’s now much easier to see where you went wrong on a certain part and adjust your timing accordingly. As a result, Lammy feels appropriately challenging in all the right ways. That said, if it’s still a bit too imposing, the “Easy” mode lets you play through six of the game’s seven stages by just pressing any button. While you can’t save, it’s good that you’re able to experience most of the game regardless of your skill level. 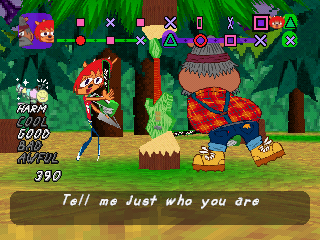 Another improvement is that there’s a lot more to play around with. There’s now a multiplayer mode, where you and a friend (in the form of Lammy’s evil goth-styled doppelganger Rammy) can play through beaten stages either co-operatively or competitively. It offers a nice change of pace and allows more people to get involved, but you can also play with/against the computer if you prefer playing solo. 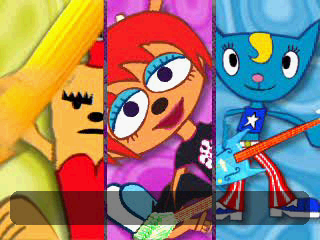 As well as that, when you beat the game, you unlock a brand new mode where you play as Parappa through heavily remixed and rearranged versions of stages two through seven (there is a Parappa remix of the first stage featured on the disc, but it’s not accessible through normal means). Not only are these basically six new levels – complete with short cutscenes showing Parappa’s attempts to form a rock band with PJ Berri – but these can also be played in multiplayer against Lammy, with the two versions changing for every line. You can even choose whether to play as Parappa or Lammy, further doubling the number of levels on offer!

Of course, all this wouldn’t be worth much if the music wasn’t any good, but it’s quite excellent. Since you’re using a guitar, Lammy goes for rock for its musical direction, and does wonders with it. Each stage focuses on a different type of rock from 60s pop rock to funk to even thrash metal, and they all use the strengths of their genres to create memorable and compelling challenges for you to tackle. The guitar lines you play and improvise sound so satisfying to play, and they work impressively well within the chopped up parts. While perhaps not as catchy as PaRappa‘s tunes, the soundtrack is still a delight and the composers (Masaya Matsuura, Yoshihisa Suzuki, and Shigeyoshi Kawagoe) deserve praise for their efforts. 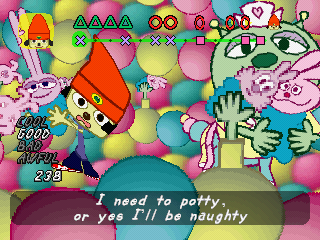 The graphics are about as good as before, with Rodney A. Greenblat’s charming paper-thin character designs meshing well with the flat-shaded 3D backgrounds and creating a distinctly likeable game to look at. The same goes for the cutscenes, which are now rendered in full screen, though there’s a more obvious use of motion capture for the characters’ movements that look a bit strange considering they’re literally flat.

Unfortunately, Lammy tries to up the ante in how crazy things are both visually and in what happens, but ends up losing the simple charm that made PaRappa so endearing. While Lammy’s an adorable character, the various circumstances you’re thrown into don’t have a connecting thread beyond random obstacles stopping you from reaching the concert in time, and while it is somewhat admirable to see the team mess around with so many strange ideas and characters, it feels less coherent.

A few changes were made to Um Jammer Lammy‘s American release compared to its Japanese/European counterpart. Some of the lyrics were changed, such as lines in stage five that referred to deforestation in a gleeful way. The most infamous changes came with stage six, for its opening cutscene – in the original version, Lammy literally dies and goes to hell; while the American version has her being sling-shot to a distant island. Despite these wildly disparate themes and settings, the actual levels and the songs haven’t changed. 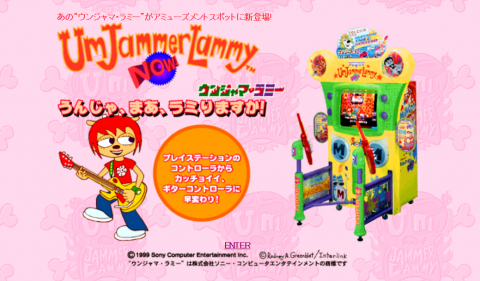 Lammy received quite a lot of promotion leading up to its release, including an arcade port co-developed with Namco called Um Jammer Lammy NOW! The game utilized a guitar controller called the “Guitarntable” where the buttons were represented along the body, resulting in the inputs being changed to suit it. It came with three difficulty levels, three separate modes for solo and multiplayer, and it allowed you to play as Lammy or Parappa. It’s also the only version of the game where you can play Parappa’s remix of stage one normally. Supposedly, the arcade cabinets didn’t do very well and were removed from mainstream circulation after a short time, making them very hard to find outside of private collectors. The game hasn’t even been dumped online, so emulation’s a no-go right now. 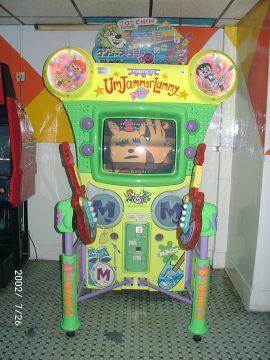 Special thanks to dsparil from the HG101 forums for helping me emulate the game.

(Screenshots of Um Jammer Lammy NOW! were sourced from the PaRappa the Rapper wiki – https://parappatherapper.fandom.com/wiki/UmJammer_Lammy_NOW!)