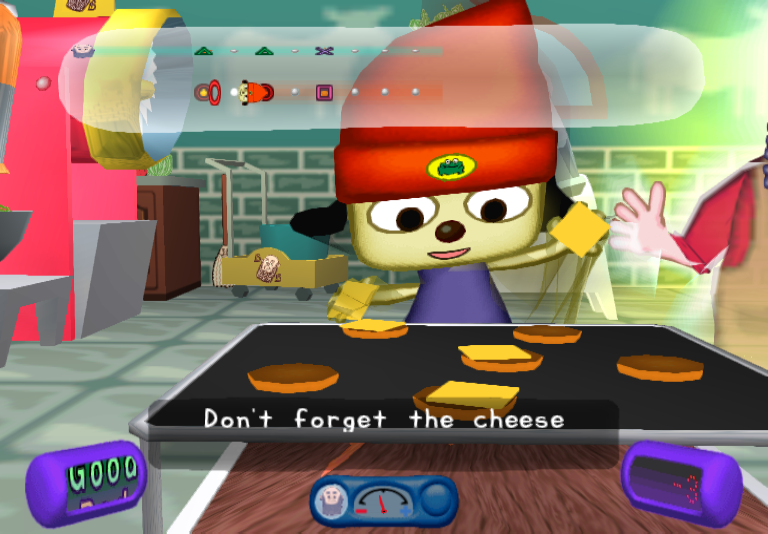 By late 2001, the rhythm-action genre was making waves round the world, with Konami putting out about a dozen hugely popular Dance Dance Revolution, GuitarFreaks and DrumMania games, Enix publishing the cult classic Bust-A-Groove series, and even NanaOn-Sha creating the minimalist innovator Vib-Ribbon. They were all taking the concept and going in new directions with it, which might be why PaRappa the Rapper 2 saw such a muted reception at the time. It’s just another PaRappa game, which is perfectly fine since that means it’s a fun time with excellent music and is even the most accessible of the three, but that also means there’s not much new going on.

Recently, Parappa won a lifetime’s supply of noodles from a contest, and has been forced to eat noodles so much that he can’t stand the sight of it. This becomes a problem when a noodle-themed dinner at Sunny Funny has him running off and being called a baby by Sunny, and then finding that every food is suddenly turning into noodles. With his friends by his side, Parappa has to figure out what’s going on while proving to Sunny and himself that he’s a man. Parappa will learn how to make burgers thanks to the ghost of Beard Burger Master, learn love and wisdom with the help of Guru Ant, train for combat from the noodle menace with Instructor Moosesha (the sister of Mooselini from the first game), learns how to style hair with Hairdresser Octopus, and fights off the antagonist, Colonel Noodle. The story also brings in Parappa’s father, who’s the inventory of a shrink ray that causes quite a bit of havoc, as well as Sunny’s dad General Potter, a high ranking member of the armed forces. Lammy and the other members of MilkCan pop up, too. 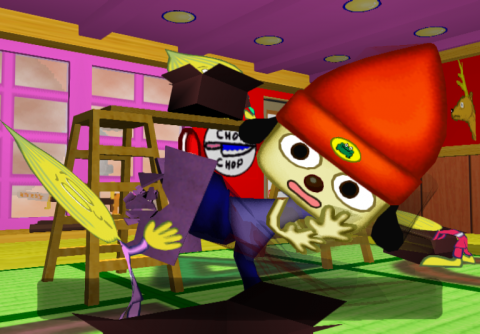 PaRappa 2‘s gameplay is the same as ever, but with a couple more tweaks to specific mechanics. You can reach a “Cool” ranking on your first run through a stage, but how you can reach it has been made clearer with three meters at the bottom of the screen. Each meter glows depending on your ability to imitate the teacher, your ability to freestyle, and how funky your raps are. If you rap enough lines that cause all three meters to glow in a row, then you’ve a very good chance of being ranked “Cool”.

Most of the changes have been done to make the game more accessible. For example, if you drop down to “Bad” or “Awful”, the stage will actually go back a couple of verses to give you more time to recover. However, it interrupts the flow of the music a bit too much, and it’s rather pointless considering that you can recover with two successful lines in a row like Lammy.

There’s also the Boxy Boy sections, where Parappa’s talking boom box will come in during each stage’s opening cutscene to help you practice a couple of the upcoming patterns before you start proper. It’s a decent idea to help out less skilled players (in fact, these sequences were nicknamed “Rodney Levels” during development, as they were made to address Rodney A. Greenblat’s troubles with playing Um Jammer Lammy). However, they spoil the surprise on the next stage and last way too long, though you can at least skip them with the start button. 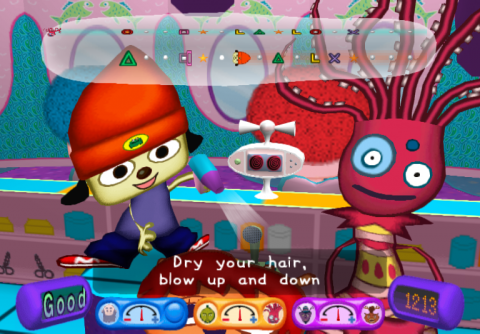 That’s not to say every tweak to make things easier is a flop. A great but subtle addition is that you can see exactly where on the line your inputs are coming in, which allows you to improve your timing and even become a bit more adventurous with freestyling. Combined with the smoother 60FPS framerate, this ends up making PaRappa 2 the most responsive game in the series and perhaps the easiest to beat.

That doesn’t mean the game is a total pushover; it’ll still throw tricky rhythms at you (albeit nowhere near as much as Lammy did), and considering how radically the music changes for the “Bad” and “Awful” ranks, getting back into the groove can be tough. But if you’re good at rhythm games or the PaRappa games, you’ll likely plow through the stages without much hassle. In that sense, things are less memorable and satisfying when you don’t have to play a single stage several times before you finally figure it out.

At least there’s plenty to come back to afterwards. When you beat the game, you’ll unlock the next “circuit”. This changes Parappa’s hat to a different color, but the more subtle tweak is that replaying stages will give you remixed lines, often more challenging than before. There are actually four “circuits”, meaning that as you keep replaying the stages and beating the game, you end up having a bunch of remixed stages. It’s a great way to encourage you keep coming back, though it’s odd that you can’t play the original stages without starting a new game. 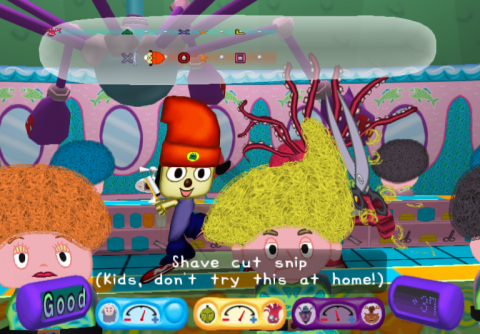 Multiplayer also returns, though the form it takes is very different. Instead of playing through an entire stage, you’re instead given a phrase that the players rap back and forth, with the goal of seeing who can freestyle a better line. The player with the worse line loses points while the better rapper gains points. Whoever has the most points wins the round, and the winner is decided by the best of three. It’s more overtly competitive and intended for quick bursts, but considering the short stage runtimes anyway, it’s a shame that you can’t go through full levels either competitively or co-operatively.

While PaRappa 2 features rapping again, the music itself goes in a totally different direction from the original and leans hard into a 1970s feel, with jamming guitars, grooving basslines and drum beats, gliding strings, and soft electric piano chords featuring throughout most of the tracks. Each stage explores a different genre, from disco to R&B to funk rock to even chiptune hip-hop, which are complimented by the rappers’ vocals to create for an incredibly memorable and enjoyable soundtrack. While the lyrics are sometimes a bit too silly in spots, the songs are simply so good that it doesn’t really matter. 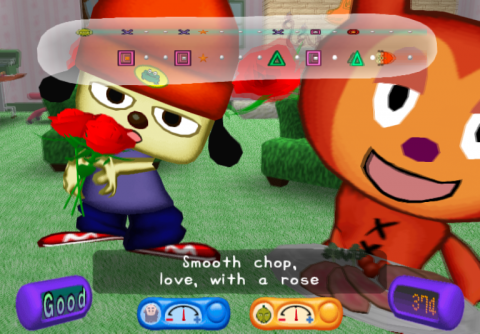 Visually, the graphics have been updated with a higher resolution, along with shading at the edges of the characters and cutscenes are rendered in-engine this time, but they’re fairly subtle changes that only really remind you that you’re playing on more powerful hardware. Aside from the upgrade to 60FPS, there’s not much difference from the earlier games, which is good in this case as the games have always had a charming artstyle with their paper-thin characters and blocky 3D backgrounds. The faster framerate just means it plays better now, and that’s pretty great.

What’s perhaps not so great is the story. While nowhere near as wacky as Lammy‘s cutscenes, PaRappa 2 still leans more towards crazy adventures with weird characters in a way that can be fairly exhausting. It can be enjoyably silly at times, but it feels like too much of an escalation in antics without the down-to-earth mundanity of the original to keep it grounded in something relatable. 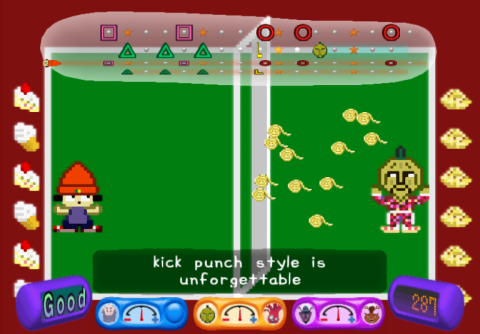 Like with Lammy, PaRappa 2 received a handful of changes for the American release, though this time only tweaking lines that originally had religious references (stage three’s “I am the lord” became “I am the man”) and references to drinking (stage one’s “tastes better than wine” turned into “better get in line”).

PaRappa 2 would be the last game in the series, with NanaOn-Sha and Rodney A. Greenblat parting ways to work on their own projects; the former creating psuedo-sequels to Vib-Ribbon and the Tamagotchi Connection: Corner Shop games among other projects. However, they would collaborate once more several years later with the obscure rhythm-action flop Major Minor’s Majestic March for the Wii. NanaOn-Sha would also attempt to create another rapping animal game alongside Gitaroo Man developer iNiS in the form of Project Rap Rabbit, though this was scrapped after the game’s Kickstarter campaign failed in early 2017.