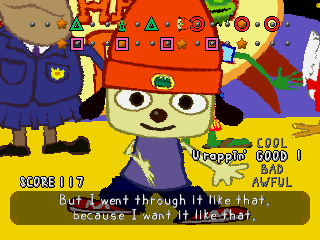 If there’s a game that defines the impact and possibilities that the original PlayStation brought to video gaming, it’s PaRappa the Rapper. The greatly expanded capabilities of the system allowed for genres to blossom in ways that hadn’t previously been possible in the mainstream scene, while the ease of developing for it resulted in a library of memorable, idiosyncratic games. As the first popular game in the rhythm-action genre, backed up by a distinct art style and musical sensibility, PaRappa demonstrates this in spades. However, it’s also an example of a game where presentation goes a long way to making up for interesting but frustratingly inconsistent mechanics.

Parappa is a young dog who hangs out his friends PJ Berri, Katy Kat, and Sunny Funny – the girl of his dreams. However, whenever he tries to impress her, something always seems to go wrong. Whether it’s bad luck, his own incompetence, or being overshadowed by the rich rambler Joe Chin, Parappa just can’t catch a break. But as long as he’s got the power of rap and his motto “I gotta believe!”, he’ll keep doing his best to catch Sunny’s eye. In order to succeed in love, he learns karate from Chop Chop Master Onion, how to drive from Instructor Mooselini, how to sell stuff at a flea market from Prince Fleaswallow, and learns how to cook from Cheap Cheap. By this point, Parappa has successfully earned enough skills to ask Sunny on a date…only to suffer from some intestinal distress, and must challenge all of the previous masters in a rap battle for the privilege of using the bathroom. 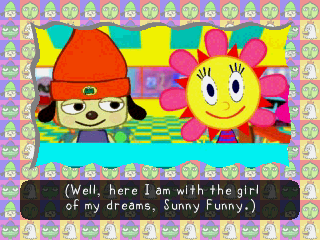 Each level in PaRappa has you being taught by a teacher who’ll rap a line, which you then have to repeat. Mechanically, this means paying attention to the pattern of buttons displayed on the line at the top of the screen, and pressing those buttons at the right time when it’s your turn. Each button plays a specific phrase or word, so you can press the buttons and rap each part whenever you like – you can even freestyle by pressing certain buttons repeatedly. This can come in very handy when trying to maintain your ranking, which ranges from rapping “Cool” to “Good” to “Bad” to “Awful”.

You’ll start at “Good”, and your rank will change depending on how well you rap. Weirdly, how this works is decided by how you perform the first line in a pair. If you successfully rap the first line, you can screw up the next without it risking going down a grade. This gives you some leeway if you can at least manage the rhythm of the first line, but it can also make trying to rise back up in ranks tricky depending on what you’ve got to deal with.

To beat each stage, you have to be ranked “Good” by the end. Being at a lower rank, or becoming worse than “Awful” at any point, fails the stage and you’ll have to start over. The “Cool” rank is something that’s only accessed when replaying beaten stages, and is achieved by freestyling so well that the teacher leaves you to rap to your heart’s content, which also changes part of the background. It’s a cool touch that encourages you to replay the levels, which is helpful considering there’s only six stages, and one that promises a secret if you can beat all the levels with a “Cool” rating…

However, being able to replay beaten stages is an achievement in itself because PaRappa is a difficult game, and often not for fair reasons. For a start, it doesn’t offer the kind of leeway that other rhythm action games provide on the timing, where your input will count as long as it’s close enough. Here, you either get it exactly or not at all, which makes things quite unforgiving. 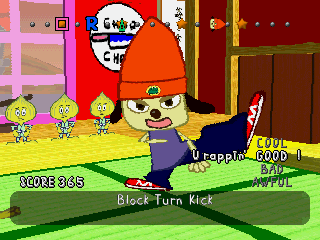 What doesn’t help is that despite the visual implication to press the buttons when your character’s icon passes through them, that doesn’t actually mean you’ve hit the right spot. You often have to feel out the timing of the different parts of the phrase, and use the button sequence as a guide to help you. It’s fairly unintuitive, but it could be and sometimes is possible to overcome if not for the fact that it’s inconsistently applied.

Doing the same inputs on the same lines will sometimes net you a good score and a maintained rank, while it’ll plummet you down a rank other times for seemingly no reason. It makes trying to understand and correct your mistakes a frustrating chore, and while freestyling can help to at least hit enough inputs to get a good line, the game’s still too tough for its own good. There is an “Easy” mode you can try, but you’re only allowed to play three of the stages – it’s made all the more frustrating since the fourth stage introduces a very harsh difficulty spike anyhow.

That said, on the odd occasion when you can figure out what the game’s demanding of you, it’s so satisfying to rap confidently and conquer the stage that’s been giving you trouble. There is a method to what’s demanded from you, but it’s often too hard to see. It’s such a shame, because everything else about the game is so good. 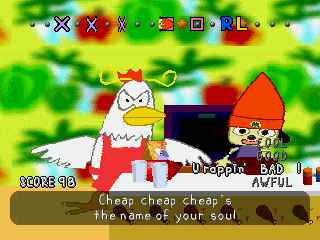 The music in PaRappa is renowned for how awesome it is, and rightfully so. Composed by the game’s producer/designer Masaya Matsuura (in addition to Yoshihisa Suzuki and duo Tuttle & Dynamo Laboratory among others), each stage uses a different genre of music to provide a unique feel, the beats and instruments are excellent arranged and very memorable, and the way that the arrangement changes to your rank is a nice touch. Of course, what really makes the songs stand out are the raps. The lyrics, written by Ryu Watabe (the voice for Joe Chin and Chop Chop Master Onion), are often silly to the point of being charming, and the various rappers deliver them with such conviction that it’s hard not to love lines such as the immortal “Kick, punch, it’s all the mind…” mantra that begins the first stage. While you’ll be replaying stages a lot, the music’s so good that it usually doesn’t matter.

Another part of PaRappa‘s charm is the visual design. The characters are presented as two-dimensional strips (in fact, “Parappa” is based on the Japanese word for “paper-thin”), moving and dancing against flat-shaded blocky backgrounds. Thanks to the childlike, adorable character designs provided by acclaimed artist Rodney A. Greenblat, it makes for an attractive game that doesn’t look like anything else. The level animations will often change depending on how well you’re doing, leading to quite a bit of silliness – technically you’re watching chef Cheap Cheap on a cooking TV show, but if you screw up, she’ll emerge from behind the television to berate Parappa in person.

This also applies to the goofy but endearing CGI cutscenes that bookend the stages, which tie the game’s presentation together. Not only are they charming to look at, but seeing Parappa continually trying to impress Sunny and keeping his spirits up no matter what happens is legitimately inspiring. It’s a simple story, told in a quietly eccentric way that makes it both hilarious and engaging. 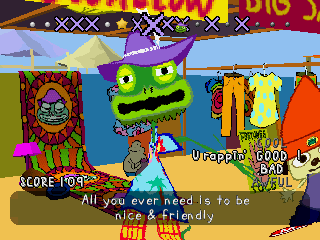 PaRappa the Rapper was ported to the PSP early on its life, and got a couple of additions. You can pause during gameplay without having to restart the stage, which is a blessing if you have to stop. Ad hoc multiplayer is available for up to four players, and you could download remixed versions of the game’s songs to play. Those provide plenty of replay value, but it’s let down by the fact that the game’s responsiveness to inputs feels worse than before. The gameplay segments are now widescreen, but the cutscenes are identical to the PS1 version, compression artifacts and all.

This also applies to the PlayStation 4 port released in 2017, which was discovered sometime after its release to just be the PSP game running in an emulator with high-definition textures. Taking into account this being a port, and the inherent lag added on HD displays, it’s even harder to recommend these versions when the game’s timing problems are further amplified.

An interview with Rodney A. Greenblat about his involvement with the original game from his website – http://www.whimsyload.com/media.items/parappa/paraInterview.html

A Gamasutra interview with Rodney A. Greenblat about his history with the series – https://www.gamasutra.com/view/feature/130752/interview_rodney_greenblat_the_.php

An overview of the series from Rodney A. Greenblat’s website – http://whimsyload.com/character-club/parappa-the-rapper/ 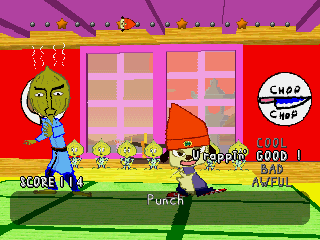 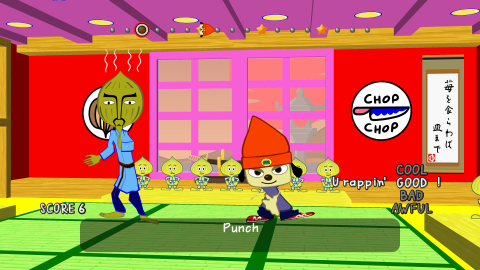 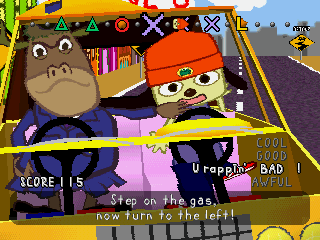 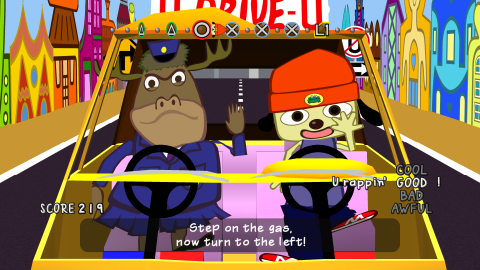 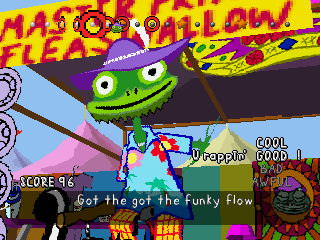 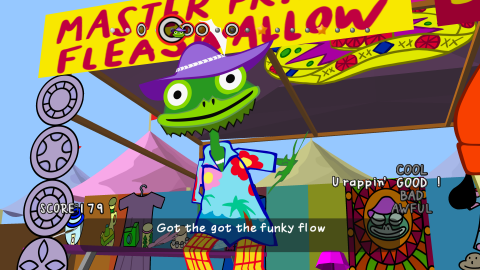 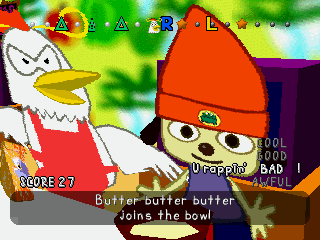 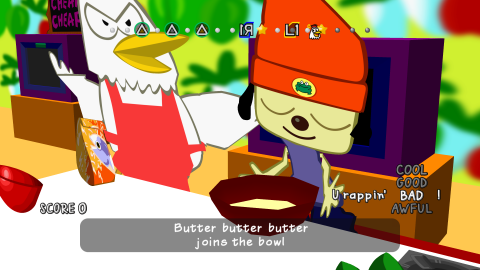