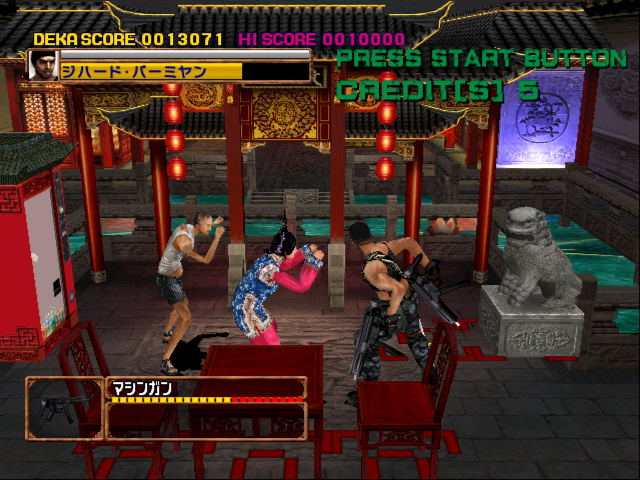 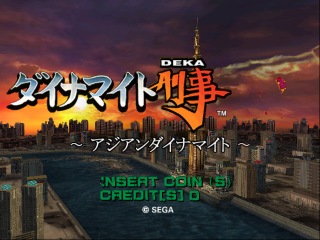 There’s a reason that the third game in the series is called Dynamite Deka EX and not Dynamite Deka 3. That’s because it’s really just a revised version of the second game, featuring completely new graphics and an upgraded power-up systems. It was developed by a team in China with supervision from Japan. The concept is actually closer to the first game than the second, featuring a terrorist takeover of a skyscraper. However, it now takes place in Hong Kong rather than an American city. There are again three characters to play as, though Jean Ivy has been replaced with Caroline Powell (the grown-up daughter of the president from the first game) and Eddie Brown is gone in favor of Jennifer Genuine. 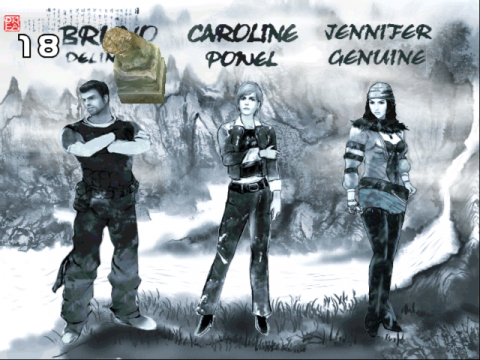 Since the levels and layout are essentially the same as Dynamite Deka 2, it offers the same three infiltration options – parachute on the roof, take a wagon up its side and grapple up, or dive to the local docks and walk right in. At first glance it does appear to be a brand new game, because all of the graphics are completely, 100% new, but the parallels are pretty easy to see when you’re familiar with both games. For example, in the second game when you’re running along the deck, you’ll see a lifeboat pulled up next to you. In Dynamite Deka EX, you’re running along scaffolding on the side of the building, and the lifeboat has been turned into a construction elevator. Most of the interior now resembles various Chinese offices and apartment buildings. The fight against the sushi chef is now a battle against a panda bear.

Unfortunately, while Dynamite Deka EX runs on the Naomi hardware (it was probably built on the Dreamcast version of the second game), the artistry really isn’t on the same level, and most of the new textures are artistically dull, with the whole color scheme permeated by browns. The new soundtrack is also rather boring. The game isn’t entirely a retread, as some cutscenes and bosses are different. The octopus has been turned into a giant living statue, and the president’s daughter now hides outside the building window. The Game Over screen, where a cook tosses together a plate of fried rice and writes GAME OVER in red sauce, is also bizarrely appropriate. The ending is different as well. 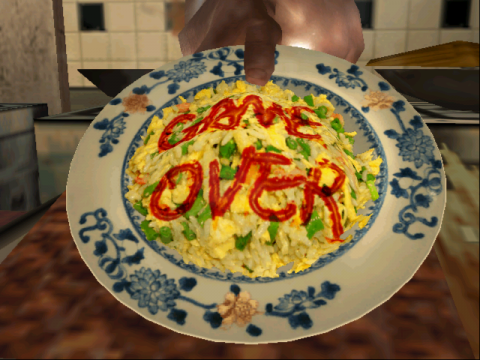 Mechanically the only difference lies in the power-up systems. Rather than picking up “P” icons, there are three different colored briefcases that trigger a “costume” change, allowing your character to take on a different persona with different movesets. In addition to their default persona, each character has three costumes:

Most of these are fundamentally ridiculous. One of them is a Chinese hopping zombie. Another is a floating Buddha-like character who attacks with psychic powers. And it’s strange that a character as fundamentally “AMERICAN!” as Bruno would morph into someone named Jihad, even though that’s almost balanced out by his Hulk Hogan-style wrestler. That’s to say nothing of the jester or S&M Voldo-style character. When piled on all of the ridiculousness already present in the core game, it transcends to a new level of campiness.

Dynamite Deka EX was certainly an odd thing to release in 2006. Not only was it visually dated, but the beat-em-up genre had been dead or quite awhile, and this one obviously doesn’t do much to upgrade it. It is, however, still just as goofy and fun as it ever was. It was never ported, and thus exists only in arcades and on emulators.