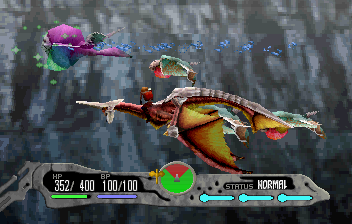 All throughout the Saturn’s life, the system struggled for an RPG to define it, mostly to combat the alliance of Final Fantasy and Dragon Quest on the PlayStation. Many fans felt Game Art’s Grandia would be Sega’s flagship RPG, although that was later ported to the PlayStation anyway. Instead, that role ended up going to Panzer Dragoon Saga, one of the last titles officially published by Sega for the system. Panzer Dragoon Saga takes the vibrant world found in the previous games and fleshes out its backstory, filling four CDs worth of cinematics, telling the story of a young dragon rider named Edge. 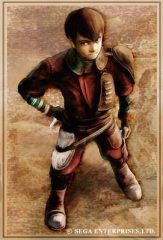 The hero of the game. He’s working at an excavation site for the Empire, until he’s attacked by a rogue squadron of soldiers looking for a mysterious artifact. Despite being flung into a chasm, he awakens unharmed, and ends up stumbling upon a dragon, whom flies him out to safety. He begins his journey to find the man who nearly killed him, a rebel soldier named Crayman, and discover the secret behind the artifact that his crew was massacred over. 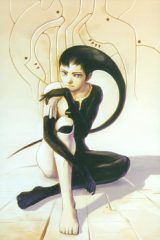 During the initial attack, Edge notices a beautiful young girl frozen into the wall, much like Han Solo in carbonite. She’s abducted by Crayman’s army for reasons that are rather unclear. She later appears riding a powerful beast known as the Atolm Dragon, and immediately targets Edge as her enemy. She appears to have been brainwashed, although only Edge can set her straight before she unleashes terrible devastation upon the world. 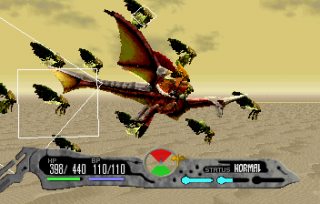 Panzer Dragoon Saga is unlike any other RPG for any other system. Other than Edge and his dragon, there aren’t any other party members, although NPCs will occasionally hop onboard for the ride. Although there are sections where you run around on foot (mostly in the few towns throughout the world), most of the game – both battle and exploration – takes place riding on the back of your dragon. Unlike the on-rails action of the previous games, Saga actually lets you fly around and explore the many details areas of the Panzer Dragoon world, lending a lot more freedom to the experience.

The battle system is one of the most remarkable aspects of Panzer Dragoon Saga. The action takes place in real time, with three power bars that charge over the period of a few seconds. When a single bar charges up, you can make your move. There are two standard attacks – Edge’s gun targets a single enemy with heavy damage, while the dragon’s laser targets multiple foes with lessened damage. There are also several Berserk powers, which act as the equivalent of magic spells. If you want, you can wait to build up two or three power bars to attack multiple times at once. Certain Berserk attacks also drain multiple bars. Similarly, the enemy can attack after it’s built enough energy, although you can’t determine when they’re going to attack.

During combat, you’re positioned in one of four quadrants surrounding your enemies, and can move between them at will, although this momentarily stops the power gauge. A radar at the bottom of the screen will mark which zones are safe and which are dangerous. If you’re flying in a green zone, the enemy can’t attack; if you’re in a neutral zone, the enemy can use a weak attack, and naturally, the red zone indicates that the enemy can use a fierce attack. Obviously, you’ll want to spend as much time as possible charging in the green zones to avoid damage. However, enemies often have weak points in other positions, encouraging you to fly in the face of danger to finish battles efficiently. The enemy’s attack patterns often change multiple times during battle, forcing you to adapt and figure out the optimal positioning, timing, and type of attacks to use. 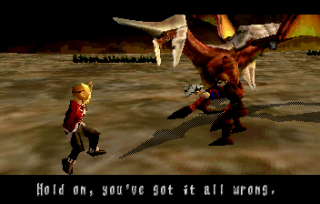 So, in other words, it’s a lot more involving than the typical RPG battle, since you always need to be on your feet. You can also control the growth and powers of your dragon by tinkering with different attributes, which in turn alters your dragon. For example, you can choose to balance your attack power between Edge’s gun and the dragon’s laser, depending on which you use more often. You also need to balance between defense and speed – do you want to be able to take a pounding, or do you want your power bar to charge faster. Depending on how you choose your statistics, your dragon also gains additional powers, such as counter attacking and healing abilities. Although your level-up bonuses change depending on your dragon form, you can change them at any time, including in the middle of battle, so you can figure out what abilities work best against certain enemies.

While there’s a ton of depth to the battle system, the constant random battles do tend to become tiresome. There are usually only a few enemy formations in each area, and once you’ve figured them out, each fight is really just going through the motions. There’s no way to run from them either. It doesn’t help that most of the “dungeons” themselves are pretty boring. You’re either flying – very slowly – across a huge, empty landscape, looking for switches to shoot at, or you’re exploring very dismal tunnels. At least the map and navigation system is very friendly, so you can’t really get lost.

The graphics also show the 3D limitations of the Saturn. Any time you’re on a dragon, the graphics are roughly the quality of Panzer Dragoon II Zwei. The dragon itself looks awesome, especially the color of its wings. However, any time you’re exploring a town, the quality takes a huge nosedive. From a design standpoint, the game is still gorgeous – the village of Zoah is gorgeously constructed and looks quite nice, especially with all of the lighting effects during the night time. But everything is painted with incredibly low resolution textures, the character models are very boxy, and slowdown is usually pretty common. Controlling Edge on foot is a bit clumsy, and taking any action – from opening a door to talking to someone – requires standing still and highlighting the target with the cursor. 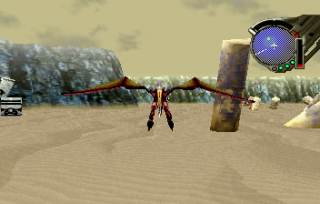 The Saturn wasn’t exactly a marvel when to came to video, so despite the abundance of cutscenes, most of them don’t look too great. They’re in a small window, they’re heavily compressed, and both the characters and environments reek of mid 90s-quality CG. Despite the fact that they’re well-directed, they don’t look half as good as anything from Square, and it’s a good example of why the Saturn was seen as lacking compared to the PlayStation. Despite the game filling four discs, the quest is quite short, clocking at maybe ten-fifteen hours, is pretty linear, and also a bit on the easy side.

All of the cutscenes are voiced, which puts the action beyond any of the Final Fantasies at the time. Although the introduction is in Panzerese, the voices switch over to Japanese once gameplay starts. The Japanese voices were kept for the English version. The music is pretty similar to Panzer Dragoon II Zwei, with a large number of battle themes depending on the area and enemies. Most of the rest of the music is more muted and leans towards the atmospheric side, but it’s very distinctive and does its job nicely.

Overall, Panzer Dragoon Saga lacks quite a bit of polish, both from a technical and a gameplay standpoint. But that shouldn’t discount anyone from trying to play it – the world is still thoroughly entrancing, despite how pixelly it gets, and the battle and development systems are completely worth it for anyone sick of the usual JRPG conventions. Unfortunately, since this was one of the last games released for the Saturn in America and Europe, it was only printed in limited quantities. The end result is that the English version is now incredibly expensive, usually hovering in the $150 range. Like many Saturn games, the Japanese version is far, far cheaper, but unfortunately will not work with the standard import conversion cartridges, requiring that you either own a Japanese Saturn or get your Saturn modded.