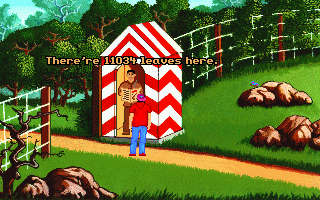 Not unlike Maniac Mansion or Hugo II: Whodunit?, Teenagent (usually spelled without the space) is another adventure game that largely focuses on surprisingly mundane and realistic affairs, with the juxtaposition of a few elements of wackiness providing most of the humor. Largely the only adventure game offering of Metropolis Software, a Polish development studio, it gained some renown in the ’90s courtesy of a demo version that generously consisted of the first third of the game, and later spread further after its official freeware release.

Teenagent is the story of one Mark Hopper, who is literally plucked randomly from his everyday life by a secretive intelligence organization. He’s their last hope when it comes to solving a bizarre series of bank robberies in which guards have watched helplessly as stacks of gold bars vanished into thin air. The first chapter of the game consists of Mark’s efforts to prove himself at the organization’s training camp and to overcome his amusingly incompetent trainer (over the course of three trials, naturally). Afterward, a lengthy chapter is spent on his efforts to repeatedly infiltrate the mansion of a secretive millionaire located in a quaint country village; once inside, he finally gets to the bottom of the mysterious thefts.

Although it’s fairly short, Teenagent is competently done in almost all respects. The interface is almost a little too clean; the left mouse button is used for all movement and examination, while the right mouse button is the universal action button, meaning there’s at least no concerns about using the wrong verbs. Unfortunately, the puzzles are just little bit more lacking in logic than the typical adventure game fare. Most of the solutions at least sort of make sense in hindsight, but there are a couple of necessary actions that really don’t seem to be discoverable outside of frustrated guessing, and there’s more than a few pixel hunts that are entirely unnecessary. (Is there any kind of purpose at all to forcing a player to pick out unaided the single useful rectangular block in a giant bookshelf?) The bright, slightly cartoonish graphics are clean, timeless VGA sprites, and everything looks like it should, with almost every action yielding a surprisingly detailed animation – pretty much every picked-up object goes down Mark’s pants one way or another, for instance. The background music consists of jaunty little MIDI tunes that fit the lightly-humorous mood nicely.

If anything leads Teenagent to rise above mere competence and mediocrity, it is the truly stellar quality of the writing. It seems hard to believe that the game was originally in Polish, considering some of the disasters that have resulted from other adventure games with foreign-language translations, though it does have its share of typos and grammar errors. Teenager though he may be, Mark is not at all edgy or obnoxious, unlike, for instance, Simon from Simon the Sorcerer; he’s just a perfectly wholesome, good-natured slacker-type more akin to Guybrush Threepwood of Monkey Island. He even gets smitten with a girl along the way. The examination of objects and inventory descriptions frequently yields an amusing quip of one sort or another; objects without a description elicit a remark of “cool”. There’s also the occasional light ’90s pop culture reference (the rapping robo-safe is particularly amusing) or commentary on the need to pick everything up.

While Teenagent might yet have been improved with a voice track, the only talkie version ever released was Polish-only. It remains readily available in recent years through its free release on GOG.com and its support in ScummVM.