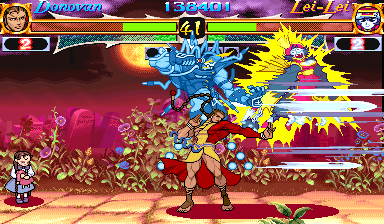 Now this is more like it. Night Warriors improves upon Darkstalkers in virtually every possible way, and is a far smoother and more enjoyable title. To get the gripes out of the way first: For some reason Capcom decided to recolor everything, and the character portrait artwork has been redone to make it look more anime style. Some characters look kind of silly because of this: it’s hard to take Zabel seriously when he’s bright pink. Sasquatch and Gallon’s brown fur just makes them look dirty, and Felicia just looks unhealthy and pale. All the stage backgrounds and endings are exactly the same as in Darkstalkers, which is also kind of a bummer. 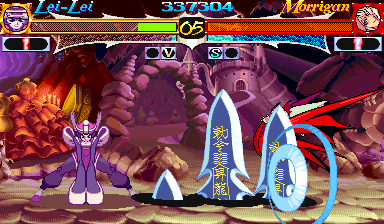 Otherwise, Night Warriors is great. Newcomers Lei-Lei and Donovan take center stage and bosses Phobos and Pyron join the fray as playable characters, raising the number of heads on the character select screen to fourteen. The biggest change to the gameplay is the addition of “Hunter Chains”, which involve stringing together a series of weak-to-strong basic attacks. It’s the basis for the combo system used in Capcom’s beloved Marvel Vs. games, and makes Night Warriors a much more dynamic experience than its predecessor. Also new are recovery rolls, which allow you to slide forwards or backwards before getting back up after your character’s been knocked over. This is important, since Night Warriors also introduces simple pursuit attacks against a downed opponent. The Super gauge now thankfully uses a stock system, making ES and EX attacks much less of a hassle than before. The soundtrack is also worth mentioning: it’s mostly remixed tunes from the first game, but they’re noticeably better. Zabel and Victor’s stage themes stand out in particular.

There was a Saturn-exclusive port of the game, which outside of some load times, is pretty solid, and is at the very least a better port than Vampire was on the PlayStation.

As good as Night Warriors is, it’s more of a transitional release than anything else. Capcom had just begun to tap into the series’ potential and would take full advantage of it in the next installment.