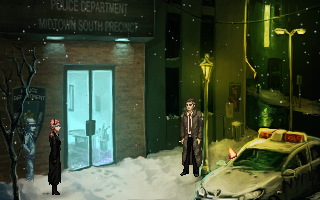 Epiphany finds the two heroes a few months after the events of Deception. Rosa is now unofficially working with detective Sam Durkin, assisting him on the occasional case with her ability to see and converse with ghosts. She is working on identifying a Jane Doe in an urban ruin in Chelsea when a man is shot on the street by a masked assailant right in front of her eyes. His spirit rises from his body and begs her to send him to the afterlife. But before Rosa is able to do anything, he lets out an agonized scream and his soul is split in two. Rosa and Joey stand there paralyzed in disbelief. They have a new and more horrendous conflict than ever before: People are not only dying, someone is wiping them from existence entirely. 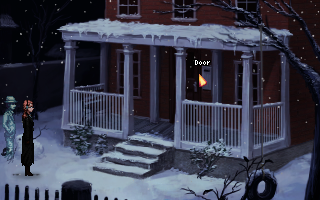 The first thing to note about Epiphany is how insanely gorgeous it is. Ben Chandler, who worked on the character sprites in Deception (as well as Resonance), returns to do both the character art and background art here. He puts an incredible amount of detail into his work. The first screen alone displays a great deal of motion and mise-en-scène: Cars drive by on the street at the end of an alleyway, neon lights flicker, snow is constantly falling in a natural flow, and characters have unique idling animations like head scratching, smoking, rubbing hands together for warmth, etc. Chandler’s commentary track elaborates how he set up the cinematography of each screen, illustrating his bold and deliberate choices in color and lighting. The character portraits are also crisp and detailed, barely marred by the lack of speaking animations that they’ve been missing since Convergence. Epiphany is by far the best looking Blackwell game.

The ever-falling snow makes for a perfect representation of Epiphany‘s atmosphere: It is indeed by far the darkest Blackwell game. Gilbert himself expressed surprise at how far the series has gotten. While previous games dealt with wasted dreams, feelings of inadequacy, broken families, and lost love, Epiphany tackles drug addiction, prostitution, child murder, insanity, and fates worse than death. 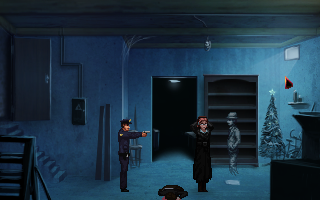 Thomas Regin composed the final Blackwell soundtrack as well. As expected, it’s a great one. The main menu theme in particular epitomizes the tone of the series, a gorgeous melancholy saxophone wailing over gentle cymbal tapping. Regin again synthesizes jazz and electronic music into that distinctly Blackwell vibe, expressing the angst and loneliness inherent in cool jazz and the urgency and tension of electronica. There’s also a fun little parody of the Lord of the Rings soundtrack.

Epiphany‘s gameplay is, well, what you expect from a Blackwell game: Much of the same with a couple small innovations. Joey and Rosa now have the option to call their partner into the room with them, which means that they don’t always have to stick together in one place. The myPhone returns with the sole addition of being able to download photos and apps, which only comes into use for a few specific puzzles. The only really grating part of the game is another section of going back and forth collecting and using information. This time, Rosa must go to the police station time and again to ask a cop for information out of the NYPD database. It’s not terrible, won’t make you quit the game in frustration, but it is kind of a drag. 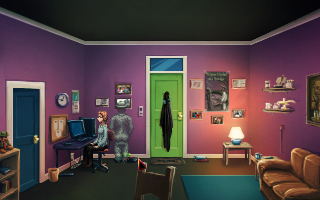 As mentioned, players coming to Epiphany after playing Deception are in the unfortunate position of expecting a plot that never manifested. The story is somewhat related with a few brief references, but the “secret enemy” of Deception only comes up tangentially. Furthermore, there are a couple small flashback sections that have caused some contention with critics. To the plot of Epiphany alone, they seem frivolous. But to the overall arc of the Blackwell games they add some excellent context.

Gilbert has evolved extensively as a developer since 2006 and the Blackwell series is a testament to that. Finishing the series means moving on to the next stage in his career. He expressed mixed feelings when the series came to an end. “I’m gonna miss it, but it’s also nice to move on to other things,” he explained in an interview with Gamasutra. “I’ve had these characters in my head for such a long time, and I’m also feeling like the original games, while they’re still good, I just see what I could have done better. I’m still attached to those games while Blackwell is still going on, and now that it’s a clean break, I can move on to something else without feeling like I need to get another Blackwell game out for the fans.”

While Wadjet Eye titles with ghost stories and psychics are likely at an end, Gilbert’s New York City is still around, and a new game based in the same universe is always in the cards. And with his much improved abilities as a game maker, fans should be assured of its quality.

The early games may be a bit rough around the edges, but as a whole Blackwell is one of the best adventure game series ever. The stories, the characters, the music, the graphics, everything about it is inimitable. Wadjet Eye’s efforts are a joy to play. Gilbert’s love for his home city shows through in every screen, every line of dialogue. The multitude of character studies make it deeply affecting, a series of supernatural Joseph Mitchell-esque exposes, inspiring and bittersweet. Wadjet Eye fuses the heart of an independently developed game with the polish of a professional product.