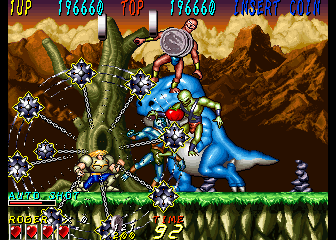 It’s the future year 2993, and space time patroller Roger has followed space criminal Gustaf through a time warp, sending them both crashlanding on a prehistoric planet. It turns out that Gustaf has apparently also angered the local indigenous people, who are something like werewolves, and lend their aid to adventure across the wilderness and take them down. 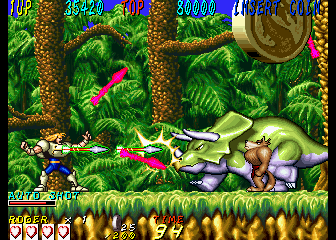 Dyna Gear is a co-op arcade run-and-gun, with a heavy emphasis on the “run” part. The game is almost always in forward motion as the heroes, Roger and Wolf, slice up evil dinosaurs and whatever other troubles they happen upon. There are lots of hills and slopes, walls to climb and branches to grapple under; it’s like that one section in Strider where you careen down an exploding hill, extrapolated out into an entire game. Roger is slightly faster while Wolf jumps higher, though they still play similarly. The title is actually quite clever too – the “Dyna” part suggests explosives like “dynamite” while also sounding like the first half of the word “dinosaur”. The title screen also charmingly refers to itself as “An Action Adventure On The Era Of Dinosaur”.
Most enemies explode in coins, large and small, which are collected with loud, satisfying chimes; get enough and you’ll get an extra life. Some of the larger dino foes will also perish and politely yield a ready-to-eat steak, which will replenish some of your health. The levels have quite a bit of vertical range, offering treetops to run through or alternate paths to take, but you can’t move backwards so you also can’t explore, requiring that you keep in constant forward motion. 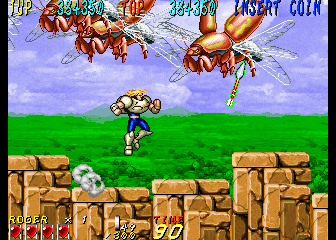 There are four main weapons, and each weapon has a special attack which is executed when you’ve jammed down the attack button enough times. There are swords, which also have a limited range flurry special attack, as well as powerful axes, which are thrown out in a wide upward spread. Less visually impressive (though still useful) are homing arrows. The coolest weapon is the ball-and-chain hammer, which spins around in a circle and provides a barrier of destruction around your hero. This is easily the most fun weapon of the game, except the short range makes it problematic to use in boss fights, where getting too close makes it liable that you’ll get hit. Not every dinosaur is out to get you, though, and occasionally one will join your side, running next to you while you dash through the level. After certain levels, you’ll also visit villages of the wolf folk, who offer power-ups and assorted questionable translated dialogue in an attempt to provide aid.
Dyna Gear‘s strength lies in its kinetic energy; it’s fast and busy, fully animated with delightful character designs. Roger’s design is ridiculous, with long blond hair and a square jaw, with armor that looks like an American football uniform; meanwhile, Wolf is also extremely top heavy despite not wearing any clothes, looking like a werewolf that’s devoted his entire life to hanging out at the gym. The dinosaurs have comical (though not quite cartoony) look to them, and many are often gigantic, with longer necked creatures crafted out of multiple sprites. The temple areas even feature odd contraptions like robots. There’s even a brief bit where you fight through swirling monoliths a la Xevious. It’s bright and colorful, and things explode comic book-style balloons; there’s little about this game that isn’t wild and boisterous. 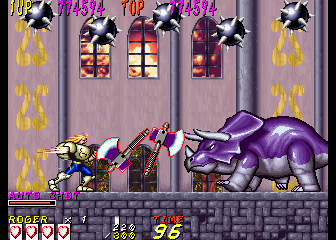 The only real sore spots come when the game loses its forward momentum. The fourth stage, the Labyrinth takes place in a trap-filled temple, which forces you to climb through narrow corridors and enclosed spaces while dodging spears in the walls, and it’s just not much fun. The boss and mini-boss fights similarly causes the pace to come to a halt; there’s nothing particularly bad about most of them and they’re resolved fairly quickly, so it’s generally not much of a problem…except the very last level has a boss rush against previously defeated baddies before facing off against Gustaf, which grows very tiresome. Most of the game isn’t hugely difficult before this point, as you get a life bar and a number of lives, though continuing sends you back to an earlier checkpoint. There are two endings, one where Wolf’s tribe are able to repair Roger’s ship and he’s able to return home, while in the other, Roger is stranded and needs to wait for a rescue vessel. It’s not entirely clear how these are triggered, but it seems to be based on which character was chosen and if they used continues or not.
Dyna Gear is one of those many mid-90s arcade games that just disappeared in smoke, especially having never been ported to a console, but its madcap liveliness and goofy sensibilities turn it into a good time. While the game is credited to Sammy, it was actually developed by Scarab, a company founded by Tsutomu Fujisawa in the wake of UPL’s bankruptcy. One of Fujisawa’s last games for UPL was Vandyke, an overhead action game that shares some elements with Dyna Gear, like the prehistoric enemies, the spinning ball-and-chain weapon, and its oddball sense of humor. However, they play very differently, so they can’t really be said to be related. Scarab then worked on a number of fighting games, including Sammy’s Survival Arts, as well as the dire 32-bit fighters Battle Monsters and Killing Zone. They did work with Sega on the All Japan Pro Wrestling series, including the Giant Gram games for the Dreamcast. In 2002 it was subsumed into Cavia, where it was later renamed feelplus. Eventually both entities merged with Artoon and all were absorbed into Marvelous.