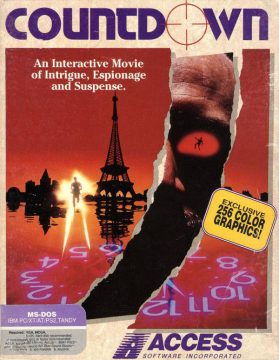 Access Software was ahead of its competitors when it came to multimedia productions, with their games featuring digitized actors and sound, which could even be played on a PC speaker. Countdown was the first game to use the adventure game engine later seen in Martian Memorandum (the second Tex Murphy game) and Amazon: Guardians of Eden. You play as secret agent Mason Powers, who has 96 hours to solve the murder of his boss and uncover a terrorist plot to assassinate the president. Unfortunately, you’ve lost your memory, and the plot is pieced together through the use of flashbacks. 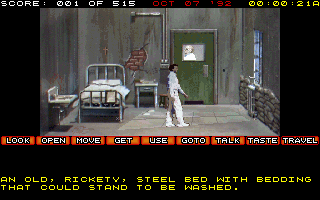 Countdown starts in an insane asylum, which Mason must escape from. It’s an incredibly difficult segment, filled with trial and error gameplay and awful stealth sequences. These are viewed from an overhead perspective, and you can barely see more than an inch in front of you. Many times it’s impossible to avoid getting caught, resulting in you getting lobotomized over and over. Most gamers are likely to give up here, which is understandable, and it’s not like the rest of the game has anything worthwhile. The plot is standard spy movie dreck, the interface is a huge pain to deal with, and the sole sound of Mason’s clonking footsteps will likely drive one mad. It gets easier once you leave the asylum (bar the finale, when you need to defuse a bomb) but the time limit quickly drains as you travel back and forth across Europe, which can easily lead to a doomed scenario if you dawdle. 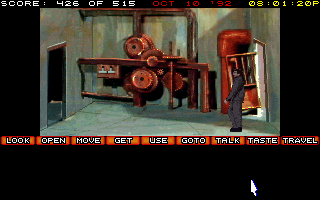 The other Access games were self-aware of their low budget and played up to it – the digitized actors here look silly but there’s not enough humor to keep it going, other than the absurd fact that Mason Powers, in his polo shirt and slacks, more closely resembles an accountant than a secret agent. Still, the animated cutscenes are remarkable for a game from 1990, and the intro theme song bleeds ‘80s, in an awesome kind of way.