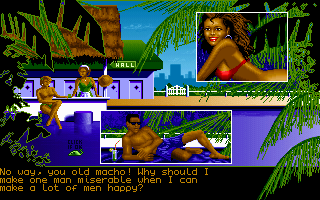 You play as Doralice, the sexiest female pilot to ever fly the friendly skies. During a Paris-to-Miami flight, a business man dies aboard your plane. In his waning breaths, he hands you a vial and asks that you deliver it to the correct authorities. These drugs, apparently, greatly increase one’s sex drive, and various forces can (and will) kill to get their hands on it. And so begins Doralice’s detective work to uncover the mystery of the drug and the conspiracy that surrounds it. 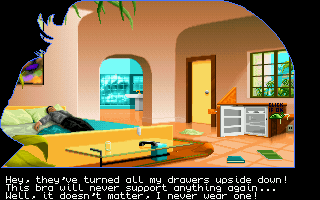 Like most purportedly “adult” games, Fascination is largely fixated on cheap thrills and ridiculously juvenile humor. While it’s always nice to see female protagonists, Doralice seems to exist mostly so you can see her in the shower, illustrated with fully nude, digitized (albeit low color) photographs. (They seem to be pictures of Playboy Playmate Renee Tenison.) Scattered around are books about erectile dysfunction and other such topics, which would technically qualify as innuendo, if they weren’t so blatant. At one point you find a medical skeleton with an additional… member. (Whoever designed that must have brutally failed anatomy.) Its hotspot is labeled “dick”, and you can play with it, if you want. In another room, a light switch is hidden on the nipple of a tasteless lamp. Some rooms are viewed through an outline of a woman in a sultry pose.

There is something slightly appealing about all of the sleaziness – it’s sort of like a full game played from the perspective of Passionate Patti from the Leisure Suit Larry games. But for all the hubbub of this being an “adult” game, most of the sexuality is confined to the jokes and to nude posters on the walls – Doralice comes close to getting some action, but it never actually happens. Furthermore, Coktel doesn’t quite possess the same humor as Al Lowe, and some of it comes off as really uncomfortable. Sure, hiding a secret laboratory underneath a lingerie shop is kind of goofy. And when another character not-so-subtly suggests that you smuggle something in your feminine area and advises not to get close to any men, it’s earned itself a completely embarrassing smirk. But when Doralice’s beau accidentally ingests the vials and ends up becoming a serial rapist, as explained in the numerous newspapers lying around, that’s… not funny. Also, whenever you lose, you’re greeted by an intensely muscular man with a creepy grin. It’s never explained who he is, but the implications are unfortunate. 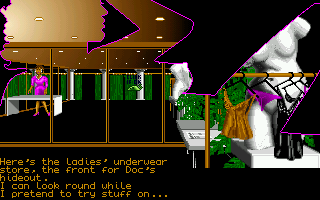 Fascination is quite linear and, like many of Coktel’s other games, you usually can’t wander more than a screen or two away from a given puzzle. It is entirely possible (and quite easy) to miss items from earlier in the game and be unable to retrieve them, a transgression only slightly forgivable because the quest is so short. It’s ultimately worth the experience, just to see the incredibly insane “it was all a fake out” finale.

After being released on disk format, Fascination was later treated to a CD-ROM rerelease. This release includes full voice acting – much of which is knowingly cheesy and therefore enjoyable – and brief bits of redbook audio music. It is also, unfortunately, censored. In the disk version you come across a porn magazine, and Doralice wonders if it’s true that Americans like ample breasts. In the CD-ROM version it’s a car magazine, and instead she wonders if Americans like nice bumpers. The shower scene at the beginning is completely gone, and many (but not all) of the nude posters are covered up. 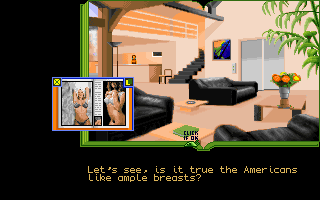