Back in the ’90s, Access Software was largely known for its popular Links series of golf games. But their other big entries into the annals of computer gaming history are the Tex Murphy detective adventure games. You wouldn’t know it offhand, though, because it wasn’t until the fifth and final game that they even branded them as such. There are five titles in the Tex Murphy series, each with completely different names – Mean Streets, Martian Memorandum, Under a Killing Moon, The Pandora Directive, and Overseer.

All of the Tex Murphy games take place in San Francisco in the early 21st century. World War III has caused significant devastation to both the city and the world at large, with the radioactive after effects causing mutations amongst the general populace. Although Tex and many others are immune, the less fortunate are not, resulting in a population of mutants. The prejudice against the mutant inhabitants, along with the associated class struggle, often plays a large role in the stories, although Tex is firmly on their side, seeing how he’s usually destitute and lives on their side of town. Like most dystopias, the San Francisco of the future is vaguely inspired by the world of Blade Runner, complete with hovercars and other bits of technology. Despite its setting, it has a very classic noir feel to it, clearly inspired by Raymond Chandler and Phillip K. Dick novels, as well as ’50s detective films, complete with wordy internal monologues and jazzy soundtracks. However, they don’t entirely play it straight – all of the Tex Murphy games have a somewhat unique sense of humor, in the way that they lovingly parody detective noir while still keeping within its conventions. You wouldn’t exactly know this from looking at the covers, though, which appear to be entirely serious.

Since its inception, the series has consistently pushed technological boundaries. Mean Streets, released in 1990, featured 256 color graphics, as well as digitized graphics and speech, even on lousy DOS-based PCs. Martian Memorandum upped the ante by using selected bits of full motion video. The third game, Under a Killing Moon, where the series really comes into its own, is a full multi-CD adventure with tons of live action footage.

One thing that has been kept consistent is the focus on digitized characters and voices, all utilizing real actors. Although Tex only appears briefly in close-ups in the first two games, he’s played by the same actor, designer/accountant Chris Jones, as the later FMV games. It’s cool that Access kept this the same through the series, although this doesn’t apply to some of the other recurring characters. It’s interesting to see how the series evolved from a boundary-pushing action/adventure/flight sim combo, to a C-grade adventure game, to a high profile multimedia franchise designed specifically to compete with big name titles like Wing Commander.

Some of the games can be a pain to get working, especially the multi-CD games, and the DVD version of Overseer requires some pretty obscure drivers. You can check some of the links for some technical help, or check out Good Old Games, which offers all five games with no DRM and easy setup.

“Look, prophecies aren’t in my job description OK? I’m just a humble PI trying to save the world as we know it.” – Under a Killing Moon

“I love murder mysteries. Ah, to be a fictional detective. Everything would be so much simpler then.” – Under A Killing Moon

“Danger is like Jell-O. There’s always room for a little more.”– The Pandora Directive

“Ah, Sylvia. My ex-wife. Whenever I think things can’t get any worse, I think about her and how she totally screwed up my life. She’s a woman who loves a man; *any* man, *any* time. I’ll never forget the day I came home early and caught her with the upholstery man. I married her for better or worse. Unfortunately, it never got any better.” – Under A Killing Moon 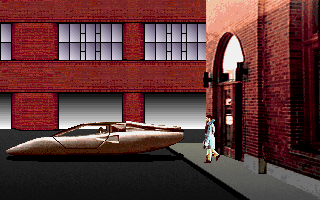 Mean Streets (no connection to the Scorcese movie) begins with Tex accepting a case from a classy looking dame named Sylvia Linsky. Her father Carl Linsky, a professor at the University of San Francisco, was found dead after having leapt off the Golden Gate Bridge. The police ruled it a suicide – Sylvia thinks it’s murder, and it’s up to Tex to investigate. As Tex gets further into the mystery, he realizes that Carl’s death is in some way related to his research in neuroscience, and it’s up to him to stop a plot that could fry the brains of everyone in the city.

Mean Streets tries to combine several different genres into one, including a flight sim, an adventure game and an action game. When you begin, you’re given a vague explanation of your mission, as well as some tips to “read the manual” for all of your leads. In order to get from place to place, you hop in your hover car, which you must pilot from a first person perspective. There are a whole bunch of awkward controls to use – using the “+” and “-” keys to accelerate and decelerate, for example – but thankfully there’s a navigational computer, which lets you input specific codes to get to various places. All you need to do is type them in and set it on autopilot. Once you reach your destination, you still need to land, which is thankfully pretty easy considering it’s impossible to crash. Once you get out of your vehicle, you’ll either meet with the person in question and interrogate them, or break into the facility to investigate. 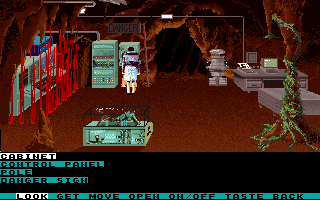 When questioning suspects, you need to type in your inquiries, which is a bit unnecessary, considering most of the topics are already listed in the manual. Sometimes you need to threaten or bribe people to cooperate. Sometimes you can also get kicked out if you act inappropriately, but it’s easy enough to come back to the conversation as if nothing happened. Your secretary Vanessa and informant Lee are also available at any time for additional information.

Whenever you break into a location, the game changes to a third-person view, where you (awkwardly) control Tex with the arrow keys. Whenever you walk next to something you can interact with, a menu pops up with a variety of commands. The whole thing is remarkably unintuitive. Once you begin to poke around, you’ll invariably set off a security alarm, which gives you limited time to search the premises and find some way to shut it off.

At a few points in the game, including bounty hunting missions to get more cash, you’ll enter side-scrolling action sequences. These are all remarkably simple, as you simply walk to the right, shoot your gun, and duck under enemy fire. For some reason, the enemies shatter like glass when killed, which shows some of the odd humor the series eventually became known for.

All of the character portraits are digitized faces with limited animation. The PC version supports 256 color VGA graphics, which was impressive for the time it was released. It also utilizes technology called “RealSound,” which allows for speech to be played without any extra hardware. It’s decent enough, especially for the IBM PC speaker, considering how ear-scratchingly painful it usually is, although it still cannot touch the quality of an actual sound card

Mean Streets‘ major flaw is that it’s just far too overdone. It’s like someone said, “Wouldn’t it be awesome if you could play as a private investigator, except it’d be totally realistic, in that you can pilot your ship anywhere, and interrogate people, and break into places and solve puzzles, and even shoot people!” And maybe that could’ve worked out, but in reality, none of these aspects are really all that impressive. The flying is slow, complicated, and ultimately made redundant by the autopilot anyway. The adventure scenes are horribly low grade, and the action scenes are amateurish. Most of the investigation just amounts to a long fetch quest, as you slowly saunter from location to location, talking to people and trying to uncover eight missing passcards to stop Linsky’s project, and grab the necessary items to find them. If you neglected to pick something up somewhere, prepare for a long jaunt across the map to go back and pick it up, then another trip to return it. 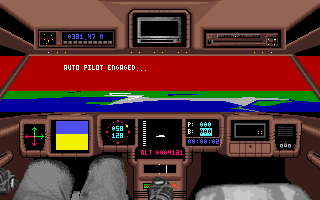 So yes, it is quite tedious, but that’s mostly just because it hasn’t aged very well. When it came out, with its ambitious design and high-tech graphics, it was lauded by both critics and gamers, winning the Best Adventure Game award of 1990 by Video Games and Computer Entertainment magazine, and even appearing on the Top 150 PC Games of All Time in a 1996 issue of Computer Gaming World. Taken in that perspective, it’s a halfway remarkable game, if mostly more in principle than execution. Since the story was eventually remade into Overseer (the fifth and last Tex Murphygame) there’s really no reason to play this outside of the novelty.

Mean Streets was published for the IBM PC, Commodore 64, Amiga and Atari ST. The Commodore version is obviously the weakest of the bunch, because it really can’t handle the digitized graphics at all. The IBM version has the best looking digitized graphics, but all of the sprites in third person sequences look completely ghastly. The Atari ST and Amiga versions are essentially identical, and while the digitized portraits aren’t quite as nice, the rest of the graphics are quite a bit better than the PC version. 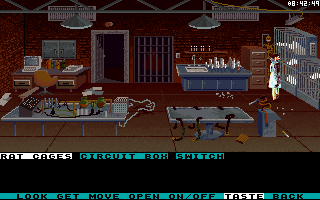 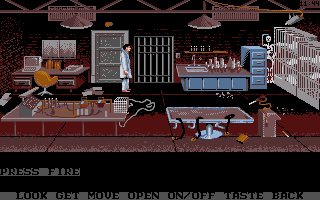 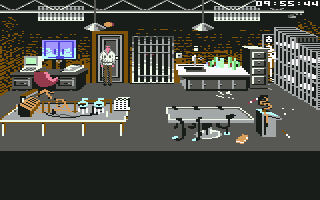