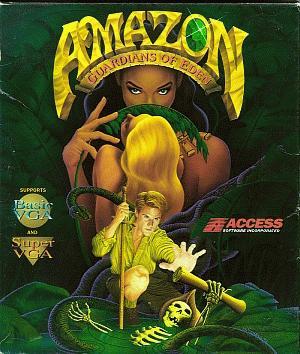 Built using the same engine as Martian Memorandum and Countdown, Access Software’s Amazon: Guardians of Eden puts you in the role of Jason, whose older brother Allen has mysteriously disappeared in the South American jungle. While it takes awhile to get off the ground, Jason eventually meets up with a beautiful young explorer named Maya and becomes entangled with the native’s struggle over some emeralds brought over by Hernando Cortez centuries before. 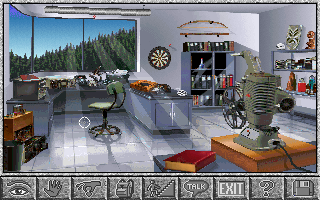 The story is presented like a ‘50s TV serial, complete with black and white projector countdown slides when you boot it up. There are twelve chapters, each ending with a melodramatic cliffhanger and featuring silly little title cards. Like Access’ other titles, the plot takes itself relatively seriously despite being very silly – a Tor Johnson look-a-like bully is taken down with hot peppers, and guards are distracted with love potion laden darts. Everyone is afraid of communists, and radiation is mutating bugs left and right. The highlights are the digitized actors and the full motion video clips, which are rarely more than a few seconds long but often hilarious, especially when they involve death scenes. Watch as an explosion with four frames of animation takes out the evil Colonel Sanchez! Or laugh the dramatic tension of Allen’s sacrifice on the bridge of death is totally ruined by the hilarious digitized yells and Wile E. Coyote scaling effects! 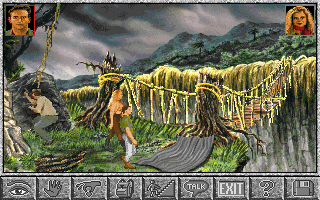 Unfortunately like Access’ other early games the interface is unresponsive, which proves incredibly frustrating during the numerous timed action sequences. Combined with the dead ends, it makes an otherwise amusing title borderline unplayable. Still, while Martian Memorandum is more noteworthy due to its affiliation with the Tex Murphy games, Amazon: Guardians of Eden is probably more memorable.