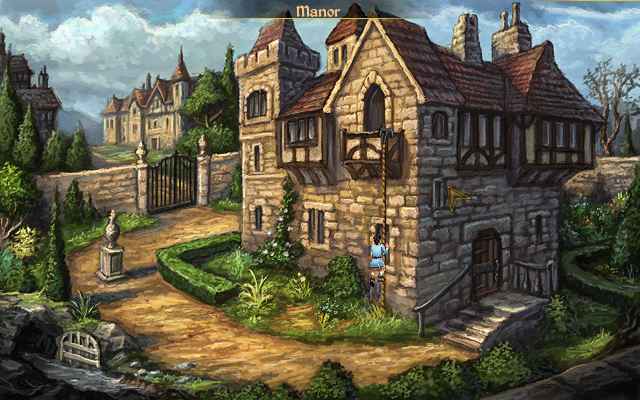 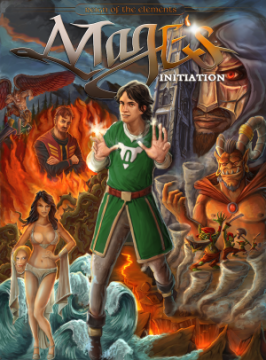 If you’re a fan of Sierra’s old Quest for Glory series, you’re gonna want to listen up for this one. Way back in 2013, a small studio called Himalaya Studios, made up mainly of people who worked on remakes for some classic Sierra games (including Quest for Glory 2), pitched a game on Kickstarter called Mage’s Initiation, a throwback to the Quest for Glory series, plus a dash of King’s Quest for good measure. It took six years, but the game has finally been finished, and we’re happy to report that the wait was worth it. With so many high quality indie point and clicks as of late, including Wadjet Eye’s Unavowed and Francisco Gonzalez’s Lamplight City, managing to stand out from the pact is no easy feat, but Himalaya has accomplished it here with arguably one of the most mechanically ambitious point and clicks in recent memory. It’s not flawless by any stretch, but it manages to do so much so well that it’s easy to overlook its shortcomings. 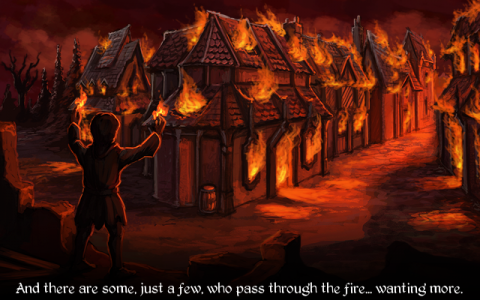 The game plays a little loose with the classic Quest for Glory set-up, not giving you a player avatar adventurer but D’arc, a mage in training with his own back story and personality. D’arc is about to become a full fledged mage, but he first has to accomplish three feats before the day is up to prove himself, unaware that treachery is afoot in the nearby town of Iginor. He’s also having strange dreams, where he sees the pasts of strangers and seems to be summoning a demon, calling himself the mightiest of mages. What happens from here depends on how you have D’arc choose his destiny.

While you can’t role play in an old school, blank slate way, you can choose what school of magic D’arc uses, picking one of the four main elements (fire, air, water, and earth) through a personality quiz and gaining new spells for combat and puzzle solving. Much like Unavowed, puzzle solutions change based on a player choice variable, though instead of what party you bring, it’s now what set of spells you have access to. For example, a water mage simply finds a piece of rope in front of the town gates, while an earth mage has to use their magic on a nearby vine in the wall to get what he needs. This doesn’t change up the solutions too much, but it makes replaying less repetitive, especially with each element class having a completely different side quest exclusive to them. The rest of the puzzle solving is mostly based around the inventory, though there are some really inspired moments scattered about, like a mirror room in the priestess castle. 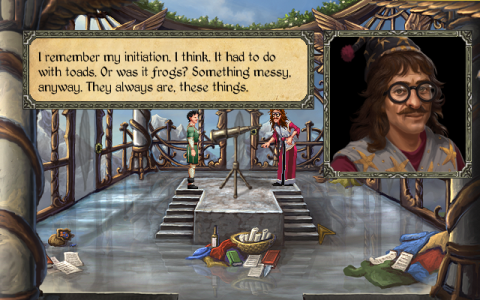 The presentation also screams classic Sierra, abandoning the more popular recent styles that embrace sprite graphics by using what appears to be fully painted backgrounds and portraits with sprite work adding extra elements almost seamlessly. The lead artist, John Paul Selwood, really flexes his muscles here, using his experience on the remakes of King’s Quest 1 and 3, not to mention Quest for Glory 2‘s remake, to make some of the most gorgeous backgrounds ever seen in a point and click to date. Brandon Blume, composer for the remakes of King’s Quest 3 and Space Quest 2, also does some great work to sell every area as alive or epic in scope. The only place where the game’s style hits a snag is in a small handful of animated cutscenes, which look like cheaply produced FMV fodder from the mid 90s, but the voice acting helps keep these few scenes from being too grating or distracting.

The voice acting is very mixed, with the weakest of the bunch being D’arc’s actor Kenny K. His inflictions are strange for the vast majority of the game, never seeming to know what word to emphasize and coming off as monotone while projecting a lot of energy and emotion, simply because he can’t seem to stop projecting that one tone. A few other characters suffer from similar issues, with Edwyn Tiong’s performance as the Asian merchant Si Long suffering less from the voice actor’s talent and more the stereotypical and vaguely offensive direction. However, the ones that do stand out really stand out, usually by playing to their type and going as far as they possibly can. 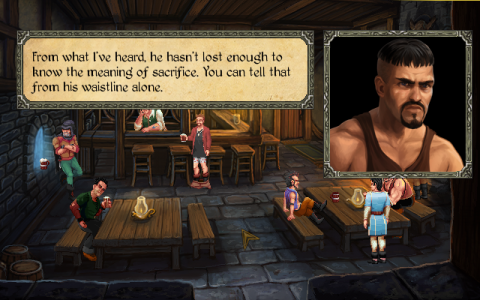 Jacob McCray’s Jonis makes for fantastic comedic relief, an air mage with his head in the clouds who can’t keep a thought straight, while the best actor of the whole game is easily Stewart Crowcombe’s Fend. What could have easily been a stereotypical thief character is made a complex supporting character and counter-point to D’arc’s character arc in the script, and given humanity and charisma in Crowcombe’s performance. Everyone one of the goblin actors also deserve special mention, including co-designer Chris Warren as Sniveler, the moronic right hand man of the red cap chief. Their delivery has just the right timing to make every line they give amusing, and the jokes they do get end up being game highlights (especially the summoning scene).

While the point and click aspects of the game are rooted in a strong foundation and have some nice modern quality of life improvements (including the choice of three control schemes), and the RPG dialog and questing systems help give the game some extra meat, the combat system is underdeveloped and occasionally aggravating. Every class gets a different spell set, but anything that isn’t an offense spell is fairly useless on the normal difficulty outside defensive spells in some set moments of the game. The vast majority of fights are random encounters as you roam a wild area, and they can mainly be solved by spamming your basic projectile spell (which you can keep casting if you run out of MP) and running to the next screen to get breathing room if there are too many enemies in the area. There’s also little reason to fight if you’re not looking for gems (which function as equipment) or side quest items. You only get experience upon defeating an enemy for the first time in random encounters, making any others afterwards a waste of your time. The experience system is basically a Sierra style points system that also grants level ups and points for stat growth, so grinding is impossible within said system. If not for the merchant side quests, this system would make random fights completely pointless. 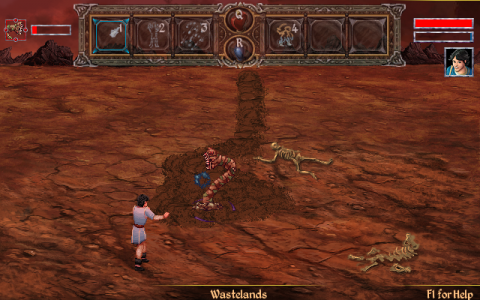 Some story fights are also very cheaply designed, the final boss a major example in how they like to spam a rain spell from the water mage spell set, which can stun a victim in a set area and escape becomes incredibly difficult. The game does allow autosaves before fights like these to help with the frustration, but that doesn’t change that a few fights come down to dumb luck rather than strategy. Thankfully, only a small handful of fights fall under this umbrella. The battle system isn’t necessarily a drag, but it feels superfluous to the main game most of the time, only breaking up stretches in dungeon style areas that exist mainly for said combat system and the RPG theme of the game.

The story is arguably also a bit too classic. While there are fun twists in the formula, especially with Fend’s entire characterization, much of the story pulls from fairly old fantasy tropes, including ones probably best left aside. The priestess Amun-Cul has sexist elements in her writing, a Cleopatra myth twist of a beauty obsessed woman manipulating others. Some fairly interesting political ideas raised in the game are also mostly ignored in the central themes, including mage social dominance and the very real and relatable issues the town has with mage society and the ruling class. A lot of RPGs do this sort of writing to give the world texture, and it always feels strange when the text doesn’t grapple with the implications, especially with a lot of extra dialog painting D’arc as a classist that doesn’t really have main story importance and reminds you that the role playing system itself is very limited for the sake of D’arc’s central story and how it contrasts with the various antagonists. The main story and the themes it raises is good, but it feels like it should have been a vessel for all these other ideas spinning around to challenge D’arc’s starting views for stronger role play possibilities. It’s satisfying, but there’s something far more interesting buried there. 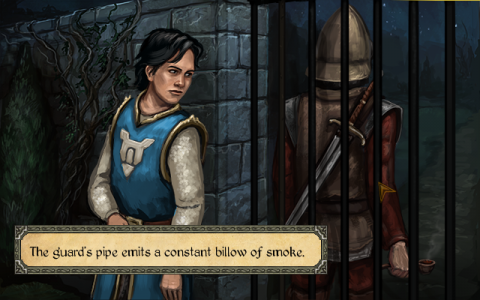 Despite these issues, Mage’s Initiation really stands out among its contemporaries, embracing old systems many threw aside and trying to expand on them. It has ambition, and while not every goal was achieved, plenty were and the game proper ended up becoming a beautiful fantasy yarn with fun characters, gripping themes of self-identity, and a ton of standout point and click puzzle moments. Many of its failures are even respectable in what they attempted to do, resulting in a flawed game that does enough right to leave you sucked into it for playthrough upon playthrough to see every possible ending or final scenario, not to mention everything you missed on the way there (and there’s a mess of things you can miss). An absolute must for point and click fans, and especially old fans of the Quest for Glory series. Even if you don’t fall into those camps, it’s still worth a look, if just for the amazing artistry on display.