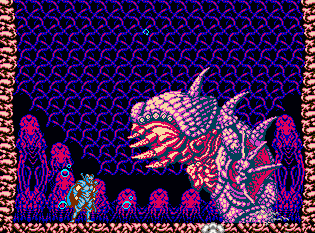 Odallus: The Dark Call is the second game from JoyMasher, and opens up with an introduction as typical as their previous game, Oniken. A maniacal tyrant enacts a dark ritual to gain ultimate power and someone’s son is in danger. Can tough guy Haggis avenge his destroyed village of Glenfinnan and rescue his son in time? It’s simple and charming, but while the game’s setting is superficially a typical fantasy tale of oppressed goofy Highlander wannabes besieged by a generically evil nemesis, the story quickly gets more intriguing. Instead of heading directly to his foe’s castle, Haggis must explore both above and below several areas, learning more about the basis of his people’s gods and, more importantly, to learn more of a powerful artifact.

The titular Odallus is a mysterious gem that has been shattered and scattered across the land. Several of the game’s bosses carry a shard of it that has caused them to transform from average people into gruesome monsters. There’s a bit of this body horror sensibility reflected in some of the game’s normal enemies and backgrounds as well. Each of the game’s levels seem like typical fair for an NES fantasy game, but each has an underground extra area made more intense with more complex level design as well as being home to the game’s more hideous and inspired enemies. This consistent atmosphere is developed by maintaining a dark color palette throughout that has just the right amount of detail to imply that there’s more to the game’s world than there really is. This approach is the same as several highly regarded NES and SNES games like Blaster Master and Demon’s Crest, where the game’s challenge comes not from its enemies but from wanting to investigate every crevice of the game’s world. 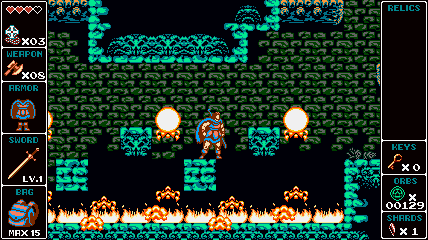 Odallus‘ graphics are a nice departure from many other retro-styled games. Colors are generally kept within limits of what an NES could potentially handle, with only the game’s large characters, liberal parallax scrolling and lack of slowdown giving it away. The action even takes place in a 4:3 window, the extra widescreen space is used to display Haggis’ status and inventory. These visual limitations are also used to help give every level a unique identity and feel that is paired with appropriately evocative music. Like the rest of the game, Odallus‘ soundtrack starts out sounding adventuresome, but quickly becomes more of a slow burn, helping emphasize a mysterious tone of exploring and careful navigation of obstacles rather than one of pure combat, only picking up again towards the game’s conclusion. The soundtrack is the work of Tiago Santos, who also composed some tracks for Oniken. His work on Odallus is perfect, evoking the classics while never sounding too much like any specific game of yesteryear, making the soundtrack and game stand as its own great work.

The most impressive thing about Odallus, however, is that while it takes inspiration from a number of cult favorites from 80s and early 90s, it does so while still forming its own unique visual and aural identity. At a glance the game wears JoyMasher’s love for Demon’s Crest, the Castlevania series (Castlevania III and Dracula X in particular), and others on its sleeve, but aspects of each are thoughtfully used to create a coherent setting and atmosphere in each of the game’s levels. Like many of those most tonally focused action games, Odallus actually has a lower enemy count than one might expect for a game meant to be evocative of the so called “Nintendo hard” days. Instead, JoyMasher shows a keen understanding of what makes these classics fun by focusing on devilish level design to both encourage exploration while simultaneously forcing the player to think on their feet when confronting enemies. The result is a very balanced challenge that’s almost always fair to the player. 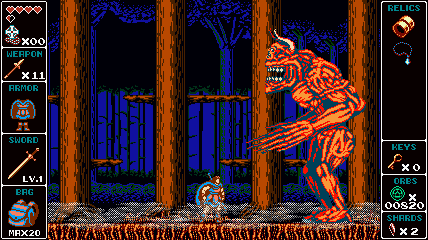 Fortunately, the game offers enough hidden paths and upgrades to find that players will rarely be stuck in a single area. Many areas cannot be fully explored without obtaining a relic in a later stage that can, for example, let them push heavy blocks or breathe underwater. There’s a huge incentive to explore to find hidden stuff, especially heart containers to increase maximum health. A map screen (again, heavily influenced by Dracula X, particularly the SNES version) keeps track of secrets found, whether the boss has been slain, and highlights the possibility of alternate stages, if you can find them. The way items are distributed throughout each level is one of the many ways Odallus is able to function as a unique homage to classic games without forcing players to contend with the brick wall difficulty spikes and other poorly balanced decisions that would go along with those same games. As Haggis travels across the land he’ll often run into a merchant that can replenish his weaponry and energy, as well as provide hints and nostalgic puns. Haggis can even purchase additional lives to keep from being booted back to the map in a pinch. These services are paid for with orbs (not a lot of money in old platformers, orbs, hearts, gems, whatever, just like Risky Woods) gained by defeating enemies and locating hidden treasure caches. The catch is that weaponry and extra lives get slightly more expensive with each purchase.

This sounds restrictive in theory, but it’s great in practice, as it makes players weigh how much energy and lives they have against how far they’ve progressed through an area before every purchase. While the game’s difficulty level is constant from about the third level on, this helps increase the tension and intensity of the game the further one gets, as points where the merchant appears get further away from each other in addition to it becoming less feasible to overload on with extra lives. 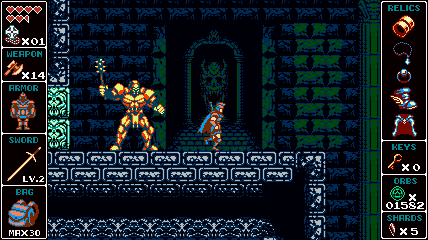 The precision with which the game’s difficulty is balanced cannot be overstated. Besides the game’s level structure offering several different paths for players to explore, the game’s enemy placement is also challenging without reaching the point of frustration. New enemies are often introduced for the first time in a relatively harmless scenario. This gives players a chance to observe enemy patterns before approaching them in more challenging environments. The length and complexity of later areas are also balanced with an increasing amount of shortcuts. With this in mind, players more familiar with the game can skip replaying large parts of a level while others may wish to regain orbs and weapons while searching the levels for additional secrets.

With this and other quality of life improvements, Odallus: The Dark Call serves as both a great blast from the past for obsessive gamers while also working as a challenging but fun introduction to a type of game rarely seen today. While Metroid and Castlevania: Symphony of the Night knockoffs have always been plentiful, by drawing inspiration from games like Demon’s Crest we get a game that offers a similarly adventuresome atmosphere with the level of polish and atmospheric flair that is typically the domain of more linear games. 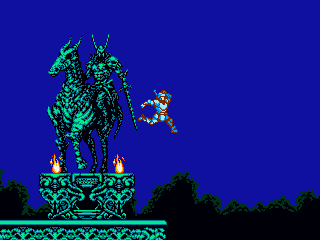 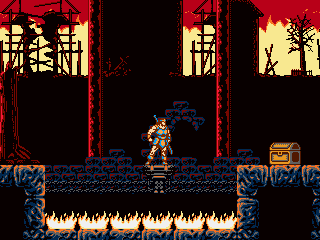 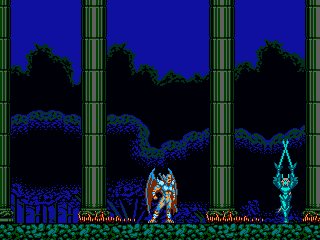