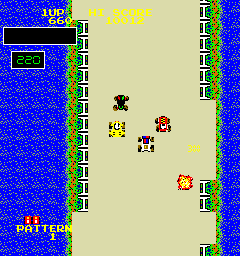 There’s something to be said for the appeal of vehicular carnage, assuming that it’s done in a completely fictional or controlled matter. Demolition derbies, car chases, and movies like Death Race 2000 are all about fast cars getting smashed into tiny little pieces. Bump ‘n’ Jump isn’t quite as violent as that film, or as controversial as the early arcade game based on it. It’s still a pretty good time, though, even though it can be fairly difficult.

You take the role of an unseen driver, trying to race their way to the end of 32 different courses. Unfortunately, these roads are in terrible condition, surrounded on both sides by cliffs and forests, and the slightest touch of the sides of the roads will make your car light up faster than a Pinto full of nitroglycerin. Complicating matters are the other drivers on the road, who can be moved into the other cars to bump them yourself, making them blow up if they hit a boundary. Doing so, however, will push you away from them in the opposite direction, possibly knocking you into another car, thus making you lose control of your vehicle or smash right into a boundary. You also have to deal with dump trucks, who drop deadly debris onto the road, and tanks, which can knock you around much farther than other vehicles.

Your car can also leap into the air with a press of the button, with the caveat that you have to be driving fast enough to do so. Jumping on top of another car will instantly destroy it, although it’ll push you a little bit, so there’s still a bit of risk. Jumping is also good for leaping over road boundaries, so it’s good for giving yourself a few seconds of breathing room if you find yourself surrounded by other cars. However, every time you jump, you’ll lose a bit of speed, so if you abuse it, you won’t be able to leap over the water hazards that appear in the road every so often. You’ll get a few moments of warning before these come up, so you’ll need to make sure you’ve got enough speed and you haven’t been bumped out of control before you approach the hazard.

Bump ‘n’ Jump is a pretty tough game, since there’s usually never less than at least four other cars on screen at once. and when the road begins to tighten, even the slightest bump will probably send you careening into a wall, or into the path of an incoming hazard. Getting through even one course with all your lives intact can be pretty tricky, given how quickly obstacles can appear in front of you, or how many cars you have to deal with. Thankfully, however, you can continue from your current course if you run out, which was actually a pretty big rarity for 1982. Unfortunately, continuing puts you back at the start of the course, meaning that making it through later stages can take a multitude of credits.

Still, despite the frustrations, it manages to be pretty enjoyable. It’s pretty easy to pick up on, with a simple goal and even simpler controls. The bumping mechanic is also fun, especially in those rare times when you can nudge one car into another. Truthfully, you’ll see about everything the game has to offer after the first course, but there’s a certain visceral thrill to trying to take out as many cars as you can that keeps it engaging. The graphics are pretty colorful for the time, and while each course looks generally identical aside from the layout, they do change colors slightly, representing the passing of the seasons. There’s also a decently lengthy tune that plays in the background, although it’s not particularly catchy. 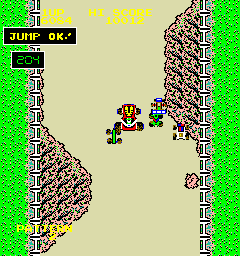 The Intellivision version is fairly good, with one of its best parts being a snazzy animated title screen. The biggest issue is that it feels like there’s a delay when you attempt to jump, which can sometimes lead to you hitting the water because the game didn’t recognize your command in time. It’s generally a lot more difficult overall, since you get brought further back when you die, and you don’t get any continues. If it weren’t so difficult, it would hold up pretty well.

The ColecoVision port mostly feels pretty faithful, and looks and sounds a little closer to the arcade version. The fact that the game offers multiple difficulties also means you might actually see the end of the first course, although this version still suffers from the same input lag issue as the Intellivision release. Thankfully, however, this version does include the continue feature, which you’re probably going to need, given the control issues. If it weren’t for that, though, it’d probably be the best of the pre-NES ports.

The Atari 2600 version takes an expected hit in graphics and sounds, but still manages to play pretty nicely. It tends to feel like enemy cars get bumped farther when you nudge them, which makes it easier to clear out a bunch of cars at once, and helps to make this particular port more fun. It also doesn’t seem to suffer from the same input lag issue as the other early ports, oddly enough, which definitely helps the playability. As it is, despite the weaker hardware, the lack of control issues gives it the edge over the other early releases.

The NES version, renamed Buggy Popper for the Famicom release, plays pretty similarly to the original game, but adds enough new features that it feels more like a pseudo-sequel. The game now begins with a brief scene of somebody calling for help as they’re driven off at the beginning of the game, so now you have some sort of justification for committing innumerable counts of vehicular homicide. The gameplay mostly remains the same, although it feels like you and the other cars are more resistant to bumping. This helps make the game just a bit easier, but also means you have to be more aggressive.

You also have to collect cans of gas that pop on the road every so often to keep your supply up. Should you ever run out of gas, you’ll lose the ability to jump, which will mean certain doom when the next obstacle appears. The nicest touch is that there’s more variety in the scenery, like stages set in a city or in the tropics, with some new songs in the soundtrack. The extra features are appreciated, although it doesn’t do much to change up a pretty simplistic arcade game. It’s definitely the best way to play the game, however, for what it offers over the original version. 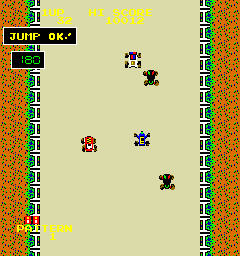 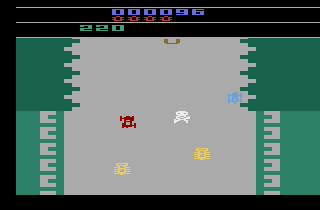 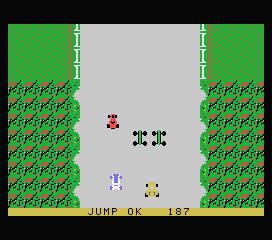 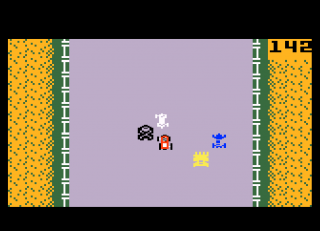