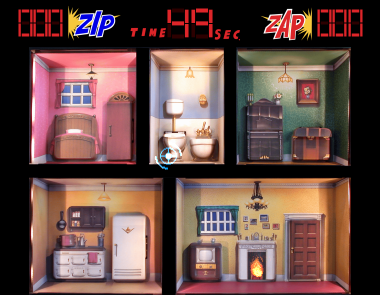 Golly! Ghost! is a lightgun redemption arcade game developed by Namco, a company that is no stranger to games that star ghosts. It takes place entirely within a house, seemingly populated with no humans. However, this house is not technically rendered on the screen. Rather, it’s an electric diorama with tiny mechanical doors that open and close. The in-game graphics of the titular ghosts are then laid over the diorama, and come out of the electrical doors. The score and timer are also in a separate LCD display. There are four types of regular ghosts: (from slowest to fastest in movement speed) blue, yellow, green, and red. A fifth ghost will appear which nets more points than a regular ghost, usually taking the form of an everyday object such as a hamburger or a football. Players have to use the guns mounted to the arcade cabinet to shoot as many ghosts as they can before the time runs out. If the player is able to survive long enough, a boss ghost will appear. If this boss ghost is shot enough times, it will split into several smaller ghosts that can also be shot. Once the timer runs out, the players score is added up, and they can move on to the next stage if they have racked up enough points from shooting ghosts. 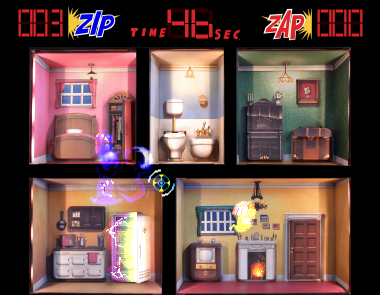 alas, Golly! Ghost! is held back by the limitations of its genre. Not the fact that it’s a lightgun game, but rather that it’s a ticket redemption game. Outside of North America, the game was released without the ticket dispenser, but these problems were not alleviated. By the second or third stage, players have to practically shoot every ghost in order to get to the next level. There are also only four short levels as well, compared to regular lightgun games that usually have more levels. Overall, while it may have been fine as a ticket redemption game, it falls short as a regular arcade game.

The game looks nice, with ghosts that glow on the screen and spooky synth music. The house diorama also looks really well put together. The other graphics get the job done in general, though they aren’t necessarily outstanding for 1990. This is also one of the few Namco arcade games that has a score that doesn’t end in “0”. While this might make it seem like the game is unplayable in MAME, there is artwork that can be downloaded that replicates the set-up of the arcade game. 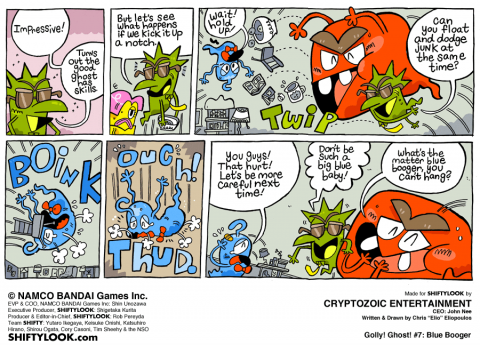 Golly! Ghost! was also one of the games chosen to have a short webcomic adaption on the defunct Namco webcomic project Shiftylook. This adaption was written and drawn by Chris Eliopoulos, who also drew and co-wrote Franklin Richards: Son of a Genius for Marvel. The plot involves the Blue Ghost moving into the house from the game and trying to win the respect of the other ghosts. Like the other Shiftylook webcomics, it disappeared with the website, but can be found on the Shiftylook archives. 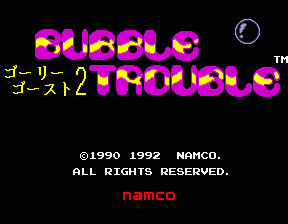 Released in 1992 exclusively for arcades in Japan, Bubble Trouble: Golly Ghost 2 does a few things differently than its predecessor. For one thing, the game takes you away from the haunted house set-up of the original game, and into the dark depths of the ocean with a theme based around sunken treasure. With a change of setting comes a change of enemies, as now the player is shooting fish, eels, seahorses, and other aquatic creatures. However, the original four ghosts from the first game show up as bonus enemies, so it’s not like the subtitle is entirely an artifact.

The electrical diorama of the first game is gone, being replaced by a wavy background with a bit of seaweed and coral floating about (though filling a cabinet with water would probably create all sorts of problems). The score, however, is still in LCD format separate from the monitor, which is a problem when emulating on MAME as there is no artwork for this game like there is for Golly Ghost. 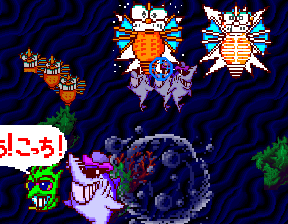 The gameplay is mostly the same but mixes things up from the first game by having the enemies go towards and away from the player in addition to moving around the screen, making use of some nice scaling effects. The bosses work the same way as in the original game. Bubble Trouble also features five scenes instead of Golly Ghost‘s four. The game is also easier than Golly Ghost, and is more forgiving to play with a mouse than the first game as well. Some, however, might find it to be too easy compared to the original, so it really comes down to a matter of taste. 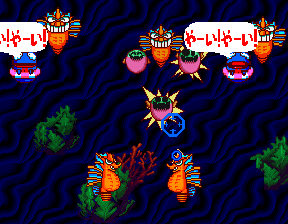 The game also takes a wackier tone compared to the already slightly wacky first game. The sprites of the aquatic and ghost enemies have several more animations than the first game, and really show off more character in each of them, even if that character is usually “Haha you didn’t shoot me.” The music is also more upbeat and louder than the first game, adding more to the frantic shooting action. Interestingly, if you kill all the enemies on the final screen, a special credits song will play. 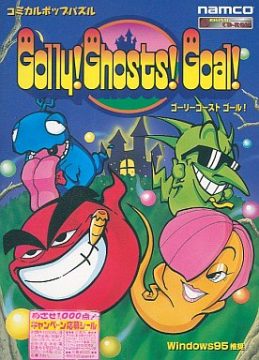 In 1996, Namco published a puzzle game for Windows based on the Golly! Ghost! characters. It was based around moving colored balls on a board to match the same color in rows of five. Not much information can be found about it, other than a few scans and photos of the box. 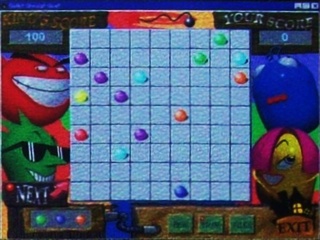