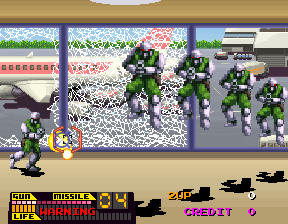 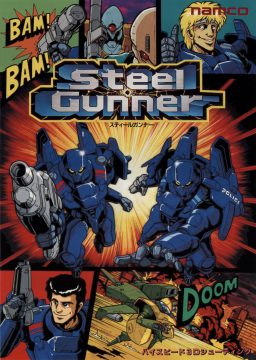 Namco has produced some of the most well known arcade light gun games ever made, including the Time Crisis and Point Blank series. But before these, in the early 90s, they developed the Steel Gunner series. It was most likely inspired by Taito’s Operation Wolf, right down to the machine guns on the cabinet that control the targeting cursor. This being before the age of polygons, the games utilize 2D visuals, and uses multi-layered scrolling and scaled sprites to deliver a blazingly fast paced shooter experience. Since they were released in that period where they were too advanced for the 16-bit systems but not advanced enough for the 32-bit systems, neither were ever ported, and outside of a fanmade port of the first game for the PC-98, has been forgotten by Namco.

Namco’s very first gun shooter is certainly an impressive one. It boasts many layers of scrolling. It has huge, bright, and colorful sprites along with some impressive scaling effects. It has simultaneous 2-player action with very little slowdown. The plot concerns a terrorist army called Sturm led by their leader, Gatse. Sturm kidnapped two weapons scientists in the city of Neo Arc to make their Super Weapon. You play as cops in armored super suits called Gargoyles, part of an elite team of armored cops, the Steel Gunners. The Steel Gunners have to stop Sturm, rescue the scientists, stop the Super Weapon before it destroys the city, and bring Gatse to justice. 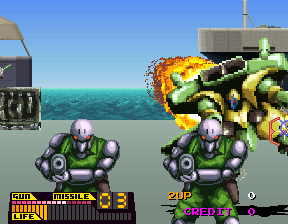 The game is pretty simple, even for a gallery shooter. You have unlimited ammunition, so there’s no need to remember to reload. In addition to the rapid fire main gun, you get a limited number of homing missiles, which act like bombs. They clear everything on screen and cancel all enemy fire.

There are four levels altogether, all of them being pretty long. The scrolling is dynamic, switching from horizontal to vertical seamlessly as levels go. Sometimes it scrolls pretty fast, so fast that enemies will flash onto the screen, attack, and disappear. Other times, the screen is static, usually for boss fights. Fuel tanks explode, enemies jump out from windows and take cover behind scenery. Both you and enemies will bust through walls to make dramatic entrances. There are dynamic chase sequences that gave a real sense of speed. There were set pieces that made everything seem larger than life. Levels also have a degree of interactivity to them too. Boxes can be smashed. Windows can be shattered. Barrels and fuel tanks explode. A ton of work was clearly put into Steel Gunner‘s levels to be sure that you could blow up everything. Innocent bystanders are sprinkled through levels, too. You lose health for shooting them, but if they make it off screen alive, then you actually gain health. Enemies thankfully won’t attack bystanders very often, but your missiles will home in on them.

Most enemies will run across the screen, take aim, and fire. There’s no cover system like in later Namco light gun shooters, so you have to kill them first before they shoot you. Some enemies attack with rockets and grenades, which can be shot out of the air. The screen can be filled up with many enemies and projectiles. It can get overwhelming at times. Also of note, you cannot continue if you die against the final boss.

The game also grades you at the end of each level and tells you your shooting accuracy. You also get your health and missiles filled up before taking on the next level. While this happens, the chief yells at you for causing almost as much damage as Sturm and is most certainly giving you a speech about how he’ll have your badge, which is quite comical in that 80s cop movie kinda way. 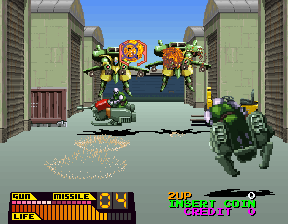 The visual design is impressive too, as it uses many layers of sprites to imitate a three dimensional look. Sprite scaling is put to good use, as enemies will sometimes come right toward you, some of them even trying to punch you. Actual enemies have a strong sci-fi look about them. You’ll see many robotic goons, flying wasp-like drones, high-speed tanks, a battleship, and even a giant robot the size of a building. It runs on the Namco System 2 arcade hardware, which also ran Phelios, Legend of Valkyrie, and Burning Force. 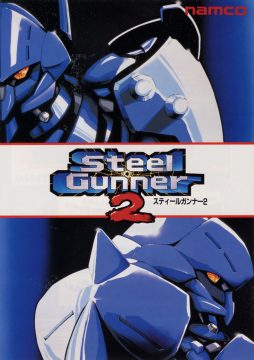 Steel Gunner 2 was released one year after the first, and was published both a conversion kit and a standalone cabinet. It runs on the same hardware, and on a technical level, is essential identical. It’s largely identical on the gameplay front too, which is a little disappointing. It’s not a bad game by any means, as it still has all of the intense action of the first game.

The biggest difference between the two games is the amount of violence. In the first Steel Gunner, you generally shot robots and vehicles. Steel Gunner 2 has new villains, the terrorist organization Vanguard, who have genetically engineered super soldiers that resemble armored monsters. Since they are technically living creatures, you can expect some of their deaths to be a bit messier. You can even dismember a few enemy types, who still try to kill you, with or without their limbs. 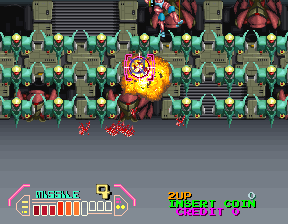 The story, while similar, is a lot more involved. In the first Steel Gunner, cutscenes popped up between levels to give you an idea of what’s going on. In Steel Gunner 2, there are barely any cutscenes. Almost the entire story is told during levels. This makes the game flow together a lot more. It feels more like a continuous storyline instead of various episodes like the first one. It’s also a bit longer, with six levels now as opposed to the first game’s four. The difficulty is a little more forgiving too, letting you refill your health and missiles more often.

Another improvement is the sound. The first Steel Gunner’s music was good, but Steel Gunner 2 completely nails it. All of the music is loud, energetic, and fits the tone of the situation perfectly. The tracks still use the FM synth, but they’re a lot more diverse this time and louder too.

Steel Gunner 2 had almost the same staff working on it as the first. Strangely, they did not work on Namco’s later, better known light gun games, Point Blank and Time Crisis. Sadly, this is the end of the official Steel Gunner series. The series never received any attention from Namco afterwards, not even in the form of a compilation. 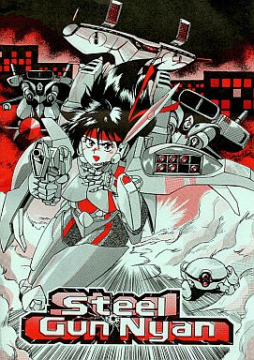 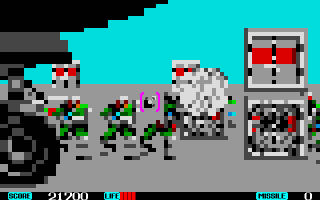 The most noticeable difference between Steel Gun Nyan and Steel Gunner is the graphics. The transition from the arcade to the PC-9801 was a rough one. The sprites are incredibly low resolution and extremely blocky, but everything is, for the most part, intact. The backgrounds have also been simplified to just a few sparse colors. The music is a remix of the original’s soundtrack with changes to sound simpler. Everything looks and sounds a lot worse than the arcade version, but it still functions and things vaguely look as they should. Even though the graphics and sound took a huge hit while porting, the gameplay did not. It’s still as fast and chaotic as ever. The levels are the same for the most part, with a few small sections cut in level 2.

The story has been partially redone. You get different cutscenes before levels consisting of still frames and scrolling text. Steel Gun Nyan replaces Garcia and Cliff with a girl in a gargoyle suit. Every time you complete a level, you see her blowing up the boss you just defeated. It’s kind of cool and adds a bit of flair to an otherwise unimpressive looking game.

The PC-9801 did not have a light gun peripheral, so instead, you aim with the mouse now instead of a gun. Clicking with the left mouse button fires, the right button shoots homing missiles. Multiplayer mode is gone, of course.

There are a few other cute little touches. The game uses its digitized voice to greet you whenever you enter the game. It also tells you “goodbye” when you exit. If you die and get a game over, the game even calls you an idiot in Japanese.

Steel Gun Nyan, despite its being kind of a visual mess, is still impressive in concept alone. Studio Genmaitya really loved Steel Gunner and it shows. They took the time to completely recreate the game from scratch, squeeze it onto a system that could barely handle it, and release it. It may be a tribute to a very obscure series, but it’s a beautiful tribute that shows how much independent games can do.

Links:
http://www.imix.or.jp/mtb/html/gunnyan.html – The developer’s website on Steel Gun Nyan. He has some extensive notes on the game’s production, how it sold, and the people who worked on it. The author of this reflects on the amount of detail and attention put into trying to recreate Steel Gunner on the PC-98. It’s all in Japanese.