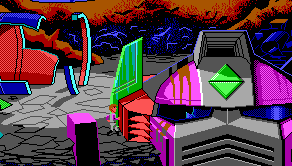 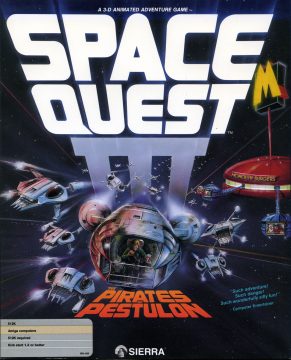 Space Quest III begins right where its predecessor left off, with Roger floating around space in hypersleep. As luck would have it, he’s “rescued” by a junk barge, but needs to dig himself out of the scrap heap and reactivate an old spaceship to escape. Once free, Roger is stalked by a Terminator-esque bounty hunter, Arnoid The Annihilator, who’s seeking restitution for the mating whistle that Roger “stole” back in Space Quest II. After adventuring to the hostile desert/tourist trap planet of Phleebut and taking care of the Arnoid, the plot kinda comes to a halt as Roger stops to enjoy a meal at Monolith Burger. 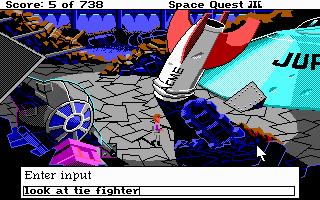 From here, it’s not entirely apparent what to do, unless you spend your time mastering the arcade-style minigame Astro Chicken, which is a bit like the classic arcade title Lunar Lander. If you get a high score, you learn that the Two Guys from Andromeda have been kidnapped by the evil Pirates of Pestulon who are forcing them to create diabolical software. (This is the only mention of it in-game, which is technically an optional “puzzle”. However, it’s also plastered all over the game’s packaging.) After deactivating the shield on the volcanic planet of Ortega, Roger infiltrates the Pestulon base, dressed as – surprise! – a janitor. The Pirates of Pestulon are actually software pirates, so their secret base resembles a modern cubicle farm. The enterprise, dubbed ScumSoft, is run by a diabolical fourteen year old named Elmo Pug, who challenges Roger to a real life game of Rock’Em Sock’Em Robots in the climactic battle. 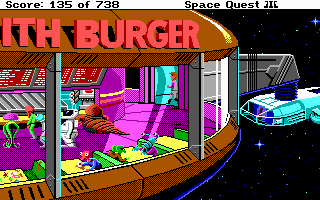 Space Quest III is the first game in the series to utilize Sierra’s enhanced SCI0 engine, which features a much higher resolution, as well as mouse control for movement. (You still need to type in commands, however.) In general, there’s a lot more detail to the game, both in the writing and the visuals. The previous Space Quest games were kinda funny, but here, the sarcasm of the narrator is much more evident. The junkyard in the beginning is filled with a giant Transformers head, the pod from 2001: A Space Odyssey, and a (bow) TIE Fighter from Star Wars, amongst other craft. The store on Phleebut is filled with postcards referencing Aliens and Dune. The enhanced graphics also allow for some cool cinematics, like the seedy store owner on Phleebut and the Arnoid droid. The SCI engine also allows for music from a variety of sound devices, ranging from Adlib FM to General MIDI. If you play on a Tandy or Mac, or enable SoundBlaster support, there’s even a cool little sound clip of Roger saying “Where am I?” right at the beginning of the game. The soundtrack is composed by Bob Siebenberg of Supertramp, who supplies a catchy riff of the Space Quest theme for the opening, as well as a handful of other memorable themes, although the vast majority of the game is still played in silence. 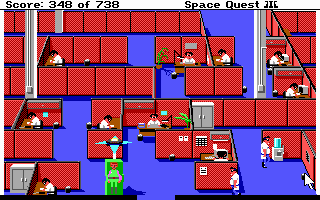 Even though the interface is better than its predecessor, there are still some annoying problems. Some of the scenes are a bit too arcadey, especially the one where you need to kill the bounty hunter, and the parser is extremely fussy with your positioning. Near the end of the game in the ScumSoft office, you need to zap bins of trash or else you’ll set off an alarm. It’s extremely hard to get in just the right spot for it to work. God forbid you miss too many times or you accidentally walk too far past it, because you’ll set off an alarm and end up encased in gelatin, leading to a Game Over. At least the action now pauses when you bring up a text entry window, which is handy in the few instances where you’re being chased. The minigames are also both extremely clumsy. 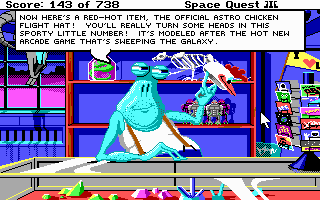 Despite some rather difficult puzzles, the game’s also ruthlessly short. Once you break out of the garbage scow and get control of your own spaceship, you get full command, requiring that you turn on your radar, set your course, zap into hyperspace, and so forth. But it’s a bit disappointing that, in the whole galaxy, there are only three locations to visit (four, once you uncover Pestulon). In spite of this, it’s still a clever, immensely likable game overall. 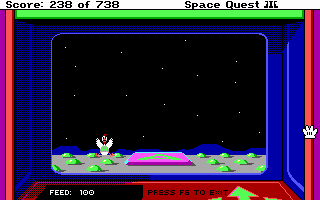