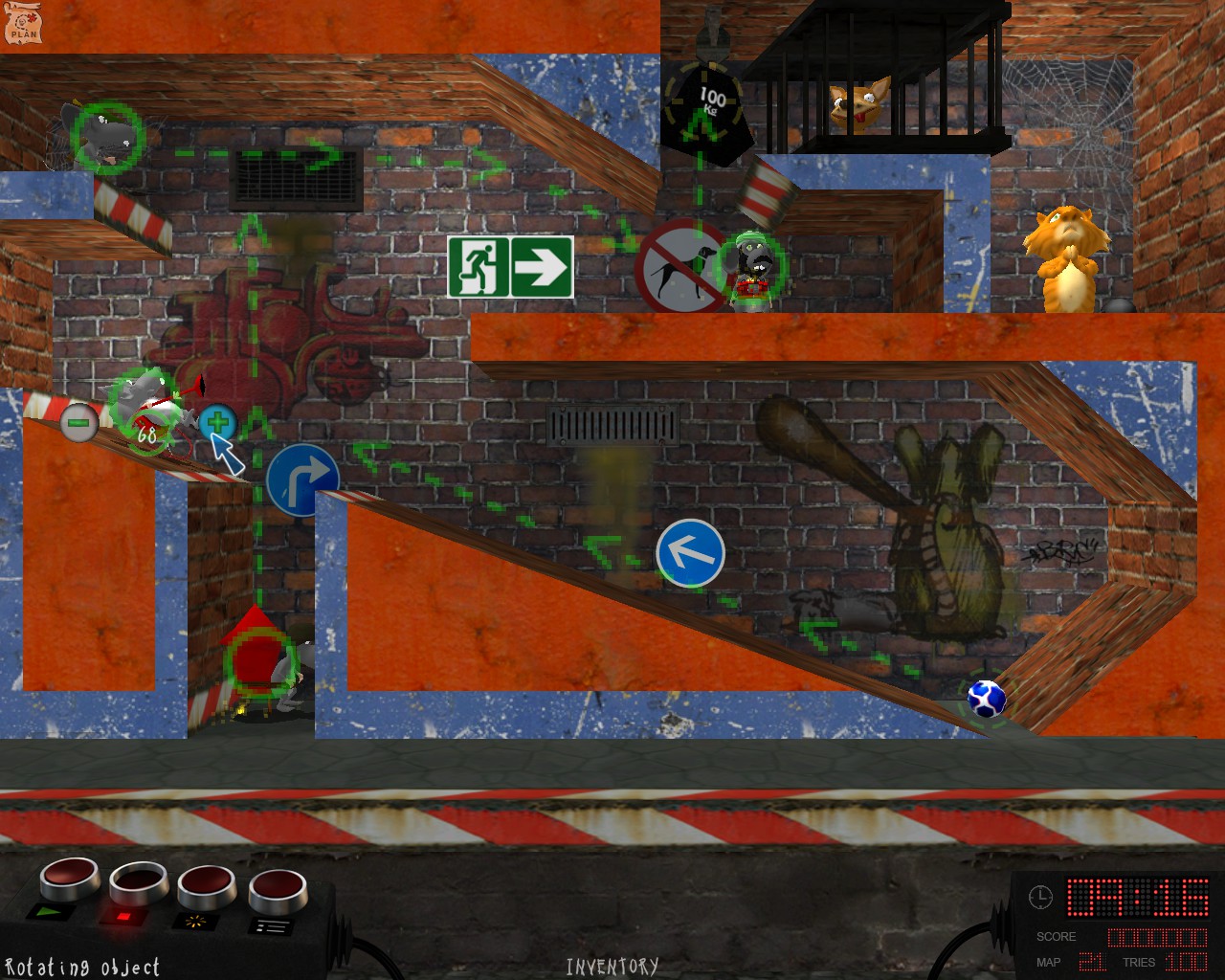 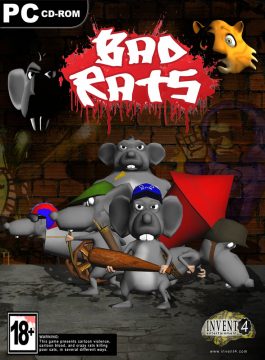 With the advent of Steam Greenlight and Early Access, the slow transformation of Steam from a prestigious digital PC storefront to a virtual dumping ground for shovelware, asset flips and fake games has become well-known among long-time PC gamers. However for those who don’t know, before the release of Greenlight back in August 2012 typically the only games allowed on Steam were ones either backed by major publishers or those made by developers with known and well regarded track-records. As a result, the quality of game releases was universally high, with notoriously awful games being relatively rare on the platform.

Enter 2009, and the release of the now infamous Bad Rats. In retrospect, this game was the warning shot for the madness on Steam to follow. 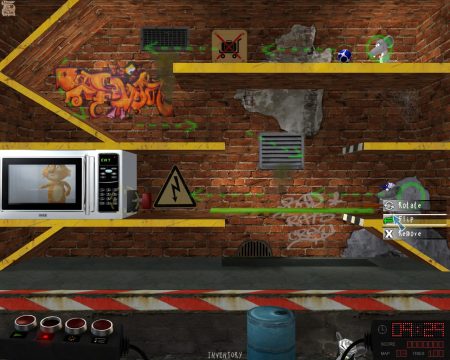 Bad Rats is ostensibly a physics-based puzzle game that’s not dissimilar to games such as The Incredible Machine or Armadillo Run. The premise is that each stage has a ball which has to be moved by using 10 different types of rats with different abilities, plus a few environmental objects, in order to hit an object that activates a trap designed to brutally murder the cat of the level (and only the ball can activate the trap). As such, the game is less about completing Rube Goldberg style machines, and more about correctly positioning the needed rats on each stage in order for the ball to bounce around properly to activate the trap.

Aside from the tutorial there are two basic game modes: Easy and Expert. Easy mode starts you off with a limited selection of rats and objects for each stage, but provides a simple plan overlay that show where the rats and objects generally need to go to complete the level. Expert mode removes the plan but gives you access to all of the rats in each level, and free rein to concoct your own solution for each map. Both modes also provide general hints for each map before starting.

So far, so standard. What sinks this into possibly being the worst physics-based puzzle game of all time is two things. The first and most obvious is the hideous, grungy urban art direction the game has going on, with poor quality textures, models and level details all-round. Nothing about how this game looks is attractive, and gives the impression of a low budget, bargain basement cash-grab that probably had its programmers double-down as the artists and modelers. Even the violence isn’t particularly appealing, with the dissonance of the low-poly cartoony cats being killed in (typically) gory fashion being less funny and more unsettling that anything else. Calling Bad Rats the video game equivalent of a murder porn movie featuring cats wouldn’t be exaggerated hyperbole and is depressingly accurate. 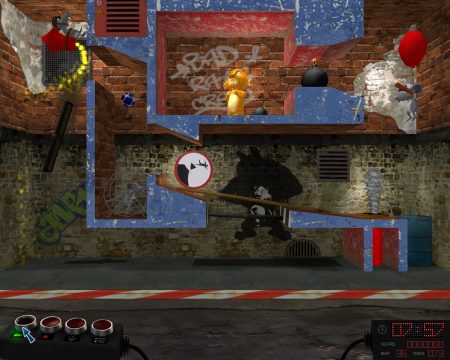 However, the game’s fatal flaw is in its physics, which is completely ludicrous for a game that’s entirely based around physics-based movement and should have been the developers top priority to get right. So what’s wrong with the physics exactly? It’s simple: they’re nondeterministic. When playing, there’s a noticeable degree of randomness applied to the amount of force on the ball when it’s hit by the rats or objects, and also randomness regarding when the rats get line-of-sight of the ball and activate. This is demonstrated easily when using Batter Rat, Lung Rat and especially Archer Rat. As a result, two separate runs of the same level can get wildly different results even if the timers, angles and positioning of the rats remain completely the same between attempts. It’s also possible for the ball to get stuck and roll towards the foreground and camera, even though the entire game is completely 2D regarding the rat and object positioning. Because of these flaws, it’s a game less of strategy and more of luck as you put your rats in the vaguely correct positions, start the level and pray that the game’s physics will work in your favor to active the trap. If not, then you’ll have to engage in tedious and fiddly trial-and-error work with the timers and rat positions, and just keep trying until you either luck out or give up. To finally hammer the point home, upon completing a stage the game will give you a chance to view the solution intended by the developers, but even these are at the mercy of the game’s wonky physics and will often fail randomly. It’s amazing.

There are other problems too, but they’re relatively minor in comparison. The user interface isn’t particularly friendly or intuitive, with the user having to scroll off-screen to select the rats and objects they want. Positioning the rats using the mouse generally works OK, but setting timers and rotating the rats is also a real pain. Instead of the luxury of using mouse gestures or key combinations, players instead have to press the plus-minus buttons accessed from the right-click menus for minute adjustments. It just makes the game feel incredibly clunky.

Because of the blatantly shoddy quality and frequent discounts that saw this game’s price reduced to $1USD or less, Bad Rats quickly became the Steam equivalent of a gag gift; an obviously junk game that’s gifted to friends solely as a cruel joke. Unfortunately, the low price and people’s morbid curiosity meant that, if 2018 SteamSpy stats are to be believed, over 400,000 Steam users now have this trash in their libraries. That’s far more success than what this game and its developers actually deserve.

If you in any way value your time and money, here’s the final verdict: Don’t ever play Bad Rats.

The first Bad Rats was bad, but that didn’t deter Invent4 who, after years of cashing-in on the first game’s ironic success, decided to go ahead and churn out a sequel called Bad Rats Show. However, trying to capitalize on the infamy of the first game a full seven years later, during the twilight years of Steam Greenlight no less, probably wasn’t the savviest of business moves. Remember, the first Bad Rats was a genuine anomaly for its time, but after Greenlight opened the sewage gates resulting in such notorious Steam releases as Day One: Garry’s Incident, Guise of the Wolf and The Slaughtering Grounds, the storefront had long been flooded with low-effort releases and Bad Rats Show appeared to just be yet another one. The sad part is that although the sequel does add some improvements to the formula of the first game, it’s still not enough to make it genuinely good. Instead, the quality has now risen from being complete garbage to barely sub-mediocre. 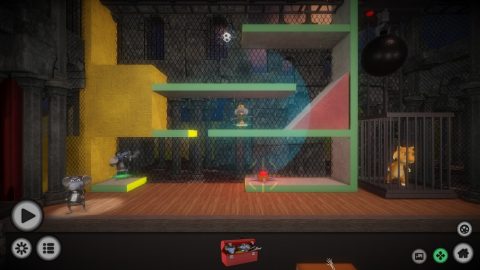 The basic premise is still the same, complete with the Easy and Expert modes of the first game (now both called Hard mode, confusingly enough). What’s different is that the inventory of usable rats is almost all brand new, with the infamous Bomber Rat being the only direct carry-over from the first game. Also new is some actual context this time around with the game essentially being a psychotic stage show, complete with dolled up rat dancers, a Beatles styled backing band who performs the terrible in-game music, and a brand new announcer who’s easily one of the worst parts of the entire game. It’s bad enough that he’s consistently obnoxious and unfunny in the mercifully skippable level intros, but he also provides a running commentary throughout the entire game and never shuts up.

On the positives, it’s obvious that the game’s had a significant increase in production values with the move to the Unity engine. The look of the game has improved from being outright horrifying in the first game to now just plain ugly. Also, the levels are now more expansive and actively require user scrolling and zooming, unlike the locked single screen stages of the first game. To handle this, the user-interface has also been noticeably overhauled with the ability to choose from multiple in-game cameras, camera zooming with the mouse-wheel, the ability to rotate rats just with the mouse and a separate button to now access your inventory of rats, instead of having to scroll off-screen. These changes help immensely for playing the traditional 2D stages that serve as the majority of the game.

It’s just a shame that for all of these improvements, the developers didn’t bother to fix the fundamental problem of the original Bad Rats: its nondeterministic physics. Again, the game  will produce wildly different results at random depending on what it feels like doing, forcing players to engage in the same miserable trial-and-error to complete stages just like in the first game. It’s bad enough with the traditional 2D levels, but once the game introduces fully 3D stages in its final chapter, it quickly becomes hellish. Add on top of that a woeful camera that frequently gets stuck or blocked by objects, and controls inadequate for positioning or accurately rotating the rats within a 3D space, and finishing these final stages feels more like a case of blind luck than skill. 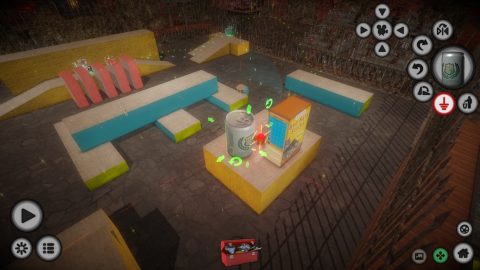 Even worse, the game is now significantly more buggy than its predecessor. Rats will be randomly removed after runs for seemingly no reason, the model for the Football Rat will mysteriously desync from its collision box and become progressively more offset, skipping certain stage endings at specific moments can cause the game to permanently run at half-speed, and the in-game cursor can sometimes completely fail to respond to mouse movement or clicks upon completing stages. Technically, this game is a mess.

The only other noteworthy addition is the ability to now create custom maps and share them in the Steam Workshop for the suffering of others, both 2D and 3D. However it only allows you to reuse the premade blocks and assets used in the regular stages, so you can’t just create or import any of your own custom level objects, making the feature relatively limited.

So, is Bad Rats Show better than the original Bad Rats? Yes, but only slightly. Is it worth playing? Again, not really. Much like the first game, the joke of playing it gets old fast. The improvements made are noticeable, but the random physics makes for a game that becomes increasingly frustrating and annoying once the initial amusement wears off. If you’re morbidly curious, Google YouTube videos of either game and be content in the schadenfreude of someone else playing the games instead of playing them yourself. You’ll be better off.