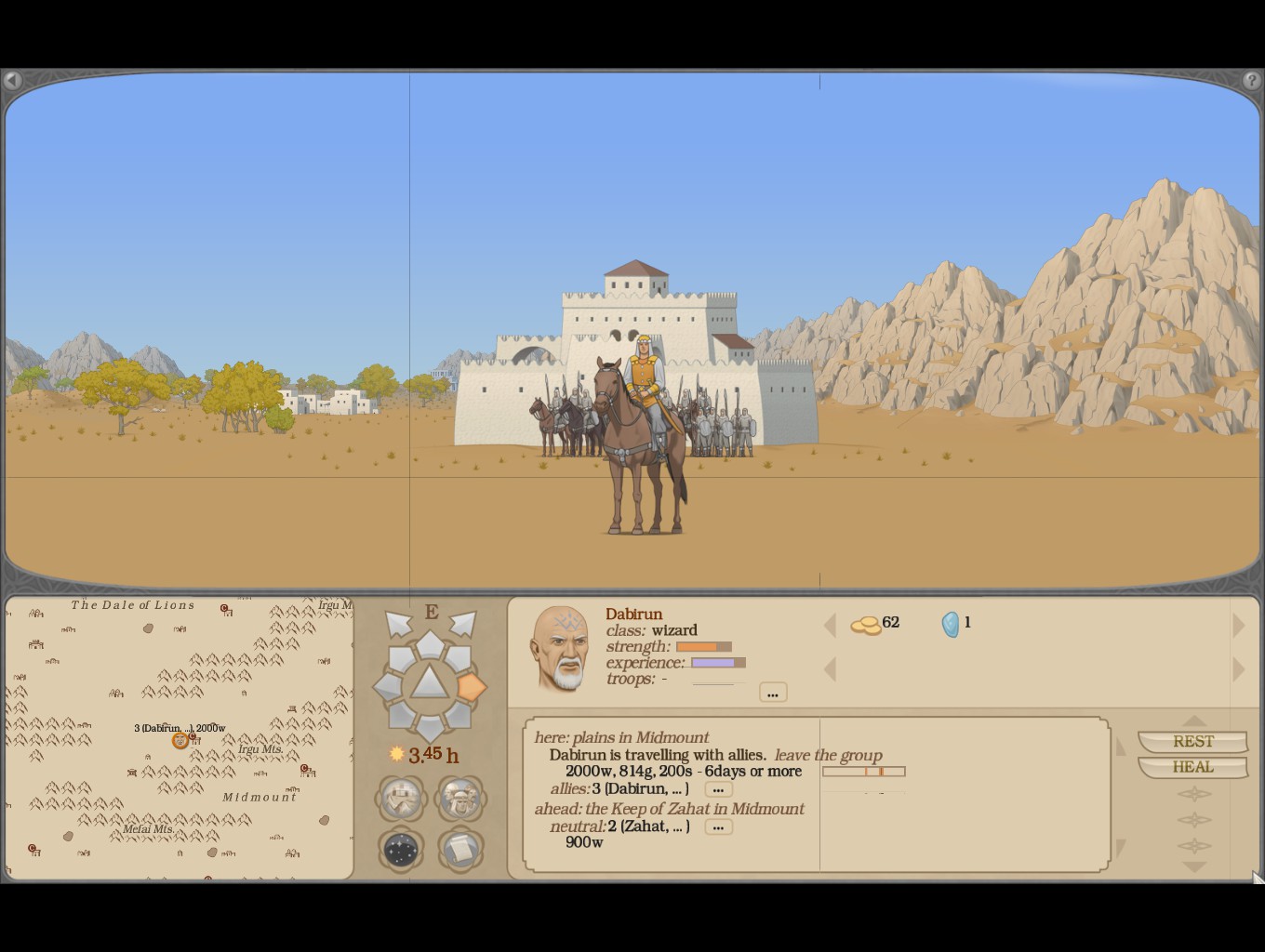 Legions of Ashworld is a Lords of Midnight clone created by Jure Rogelj, the man behind the graphics of The Midnight Engine and the more recent reamkes of the first two games. As can be expected from a game made by an artist, it looks great. The graphics look like a natural evolution of Mike Singleton’s landscaping technique with gorgeous panoramic backgrounds, detailed character sprites and beautiful views of the cities (unlike in Spectrum games, they actually have unique sprites). Legions of Ashworld differentiates itself from the game that inspired it by abandoning snowy fields and the look inspired by medieval paintings for deserts, oasas, sun-bleached mountains and generally more Middle-Eastern and North African atmosphere. The game also features an actual soundtrack inspired by music of the Middle East. It’s good and helps build the world’s atmosphere but there’s a bit too little of it so you’ll listen to few of the same songs over and over again.

The game’s story focuses on the Alliance of Free Lands and its struggles against the Empire of Arath led by a ruler named Karabak and an evil wizard Salik. It is clearly inspired by the plots of the first Lords of Midnight game but, interestingly enough, purged of any Tolkien references. Instead, the game is set in the Arab-inspired Ashworld inhabited by humans, human-like atumans, wizards, giants, lizard people and many different beasts. It’s quite an interesting universe, although the game doesn’t do much worldbuilding so a lot of its potential is unexplored. 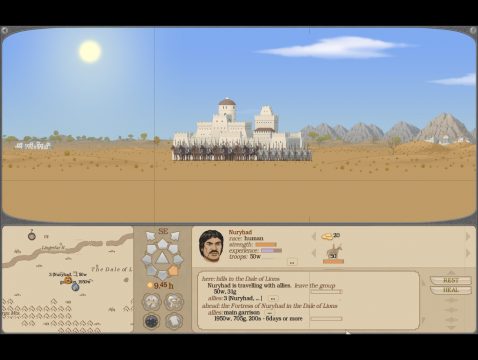 Like The Lords of Midnight, Legions of Ashworld focuses heavily on exploration. Interestingly, its approach to maps is a bit like an opposite of the one chosen by Mike Singleton’s classics – there is an automap but no general map of the world. Said automap is actually shared between different game, probably to emulate the process of making your own maps of the game. It’s an interesting approach, although slightly less fun than being given your own mapping tools like in Etrian Odyssey games.

The game has a fairly simple mechanics, noticeably simpler than Doomdark’s Revenge. There are no traits, recruiting someone is just a matter of time depending on the recruiter’s charisma (with occasional scripted event preventing you from doing so – this usually means that you need to recruit the nearest king as this automatically recruits all his vassals) and the whole enemy strategy is based on the fact that they have strength in numbers and are able to steamroll everything on their way to your capital. There are also no non-combat victory conditions: you just have to either kill the enemy king (this is actually a defensive strategy as the king leads one of the armies) or take the enemy capital. You can also set your victory conditions to require doing both which is surprisingly easier than taking the capital without killing the king – as losing your capital is an instant fail condition, concentrating as many soldiers as possible there and then making a counterattack (also a popular strategy for campaign victory in The Lords of Midnight) is more feasible than defending it while trying to make your way into the heart of Arath.

Legions of Ashworld tries to be a more traditional strategy game than Lords of Midnight by introducing simple economy (there are markets in the cities where it’s possible to hire mercenaries and buy magical items), making the armies more tired if they don’t get enough supplies, introducing siege engines that make it easier to attack cities, limiting the number of soldiers that can be led by a single hero and having wizards that give combat bonuses and are able to restore stamina. Unfortunately, most of those elements amount mostly to making some percentages slightly higher or slightly lower (while many of those elements were present in Midnight/MU, the nature of a single player game with a fairly simple AI is different enough from that of a multiplayer one in which all the players start from equal positions that their impact on the game seems much smaller). The aspect that could potentially change the game in the most meaningful way – the economy – in practice serves mostly to support the strategy of sitting in your capital and buying units while two or three heroes look for people to recruit – which is the same thing (minus the ‘buying units’ part) you’d be doing anyway. 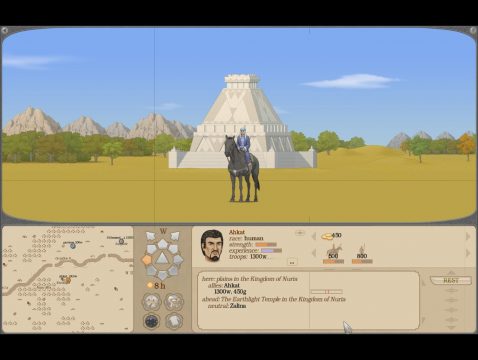 Legions of Ashworld has a better interface than any Lords of Midnight game, with easy management of your characters, grouping features similar to that of mobile versions of The Lords of Midnight and Doomdark’s Revenge, a readable and zoomable map, keyboard shortcut and easy to understand mouse controls. After fighting a battle, a short report is shown automatically summing up losses on both sides, without requiring the player to check it manually. The game was obviously made with the PCs in mind, unlike the aforementioned remakes which were designed for touch controls. If some things about playing the game aren’t clear, they can be learnt through a short tutorial scenario in which there’s only one lord to recruit and the AI never leaves the city. Unfortunately, the developer didn’t think about the players who use non-widescreen monitors as the game will be letterboxed in fullscreen mode (even if ‘fit to screen’ option is chosen in the menu).

Jure Rogelj’s game shows a lot of passion for the unique gameplay style of Mike Singleton’s games. While the game’s not nearly as good as the first two Lords of Midnight titles, playing it is a lot of fun. The game’s fairly short and not too replayable but it’s also fairly cheap so it won’t ruin anyone’s budget. Still, it’s the game for people who like a very specific style of gameplay and the newcomers to this incredibly small genre would be better of starting with the new versions of The Lords of Midnight and Doomdark’s Revenge. As many of the mechanics are borrowed from Midnight/MU, playing Legions of Ashworld might also be a way of familiarizing yourself with some of its features before going into multiplayer.