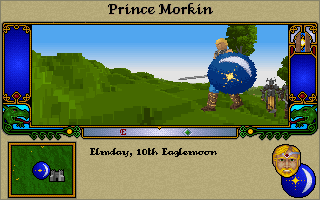 For the Moonprince, for Midnight and the Free!

Years after Shareth was defeated, Luxor – now an old man – heard that Eye of the Moon has been found in Coromand and decided to investigate. Unfortunately, his quest was cut short as when he was travelling throug Blood March, his party was ambushed by Boroth the Wolfheart who killed Lord of Blood and kidnapped the Moonprince himself, imprisoning him in Dark Citadel. Corleth (not the one from the first game but the son of Moekin and Tarithel, presumably named in his honor) and Arin (son of Lord of Blood – he inherited his father’s title and is referred to as Arin Lord Blood in-game) who travelled with them managed to escape and found their way to the Citadel, hoping to rescue the prisoners. Meanwhile, Rothron the Wise also set out to Blood March to look for Anderlane of Arkai who is rumored to be the child of Shareth and Luxor’s son. When Morkin receives a letter from Boroth demanding ransom for Luxor’s safe return and a letter from Rothron about his lost son, he gathers a group of warriors and with his father-in-law Lord of Dreams (Araleth the White in-game) heads toward Blood March.

The plot above is described, as per series tradition, in a short story that can be found in the game’s manual but is also told in a shortened form through a pre-rendered introductory cutscene at the beginning of the game. As can be expected from a game released in 1995, it is fairly cheesy and very low-poly. Of course, it still looks better than actual in-game graphics which consist mostly of a voxel-based terrain (rendered fractally so its shape is fairly natural, even though you can see individual voxels), blocky buildings, low-poly models of heroes walking over the terrain and static images of the warriors that hover behind them. The static 2D graphics in the menus are better as they try to emulate the medieval painting (although in a way that is completely different from the style of the previous games) and stained glass style, with an exception of the character portraits which are simply ugly. Like many early 3D games, the whole thing doesn’t look good (save for some of the aforementioned 2D art and the dynamically changing sky), even when compared to the dated look of the predecessors. 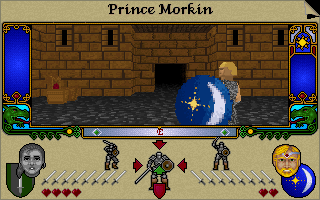 Lords of Midnight: The Citadel is a very complex game which combines first-person exploration of both the overworld and the Citadel, the ability to ride dragons or board ships, recruitment mechanics very similar to that of Doomdark’s Revenge (although here a failed recruitment doesn’t always lead to a fight and you can increase your chances of recruiting someone by rescuing a prisoner that comes from the same kingdom; also, you’re the only one that recruits this time as the enemy just attacks), a more involved combat (characters fight more or less automatically but the player can tell them where to strike and when to use a shield) and the ability to give orders to the characters instead of controlling every single one of them. It’s also all in real time. There’s a lot of ambition here and you might even ask yourself how did they make all those things work but sadly, the answer is that they really didn’t. Most of the mechanics are broken in one way or another (well, aside from recruitment which not only works the way it should but is much less of a guesswork as you can check the personalities of all the characters).

First person exploration is quite clunky – the characters walk automatically when you press a key and move to the direction you point with your mouse. It’s also absolutely pointless as you start the game with a map of the whole world and the characters are able to find everything and everyone if you tell them to. Basically, prepare yourself for less exploration and more of either looking at the characters walking across – and occasionally clipping through – the world from dramatic camera angles (it’s more boring than it sounds as the world is mostly empty) or just skipping ahead. Whatever your choice is, the game will be constantly interrupted by a message about someone collapsing from exhaustion (tired characters will seek shelter but if there’s no house in sight – there usually isn’t – they’ll just walk until they lose consciousness; it doesn’t matter though as they’ll soon rise again at full energy). You can theoretically switch those notifications off, but this means you’re going to miss actually important news like your characters getting into fights or finishing their tasks. The fighting is probably the worst as it’s hard to get an idea what should you be doing and leaving it to the computer results in pyrrhic victory if you’re lucky and usually in you dying despite having twice as much men as the enemy. 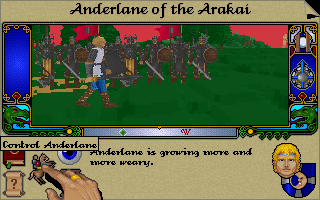 On the game’s box, it is called simply Lords of Midnight as the publisher didn’t want to limit the game’s audience to the people who played the first two titles (this also leads to it being incorrectly referred to as a 3D remake of The Lords of Midnight on several sites). Unfortunately, they didn’t really do a good job as to anyone who didn’t play any previous games in the series, it’s just extremely confusing as you just don’t know what to do next. In fact, the interface based on a complicated network of interconnected menus makes it confusing even to people who know the first two games by heart as some things are just arbitrary. For example, you can give orders to the recruited characters through their pages in ‘heroes & villains’ menu but not from the first person view – but that requires a lot of scrolling through different characters (including the enemies and unplayable ones). You can go to the ‘alliance’ menu to see the recruited characters but clicking on any of them will take you to the first person view (with an obligatory loading screen before it), not to the ‘heroes & villains’ menu.

The Citadel is the only game in the series to feature sound and music. The sounds are few and far between but what is there is generally decent. The music sounds pretty cool at first with its MIDI version of Carl Orff’s Carmina Burana(between this and Ring Cycle, it seems that the 1990s were a period of fascination with MIDI renditions of classical music for Mike Singleton) but gets boring fast as it’s just a short, looped fragment from the beginning. While you’ll probably get bored of it quickly and mute it after a few minutes (or disable the sound completely as it can cause hangups in DOSBox), the funny thing is that it’s not the only track that plays in game. It’s just that they’re all looped for about a billion times. 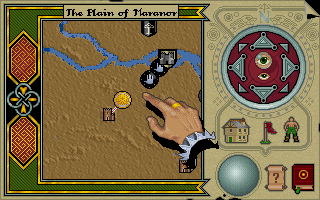 In addition to the aforementioned clipping problems, at release The Citadel played fairly fluidly in the indoor sections but slowed down significantly when out in the open. As its speed is tied to the speed of the CPU, this means that on default DOSBox settings it will work fairly well in the overworld but become unplayable in the dungeons and during combat. Finding a cycles number that makes it work the way it should seems impossible – everything results either in noticeable slowdowns or in the game becoming too fast.

Lords of Midnight: The Citadel simply isn’t a good game. It’s an ambitious one for sure but most of its elements don’t work too well and might even seem half-finished. While the ideas behind it are interesting and underneath all the tedium, technical issues and confusing menus lies a game not unlike other Lords of Midnight titles, it just never feels this way – the first person exploration is too impractical, the world is too empty and the real time aspect is too erratic when compared to the more deliberate pacing of the previous titles. Despite the potential, The Citadel ended up being one of the many failed attempts of old series to jump to 3D – nothing unusual although it’s too bad that this is ended up being the last game in the series.

Probably due to a lack of interest in the game, The Citadel has never been rereleased. While the game is available through many abandonware sites, obtaining it legally is not a big problem as the CDs often show up on eBay and even the occasional boxed copy doesn’t fetch too high prices. It is not known if the game will be remade or ported to mobile, which is too bad – if recreated with modern technology or even simply transformed into a more traditional Lords of Midnight game in an engine that powers the mobile remakes, The Citadel could be a solid title. As it is, it’s just not worth playing.

Lords of Midnight: The Citadel engine was used to create a different game: Ring Cycle, based on Wagner’s operas. Unfortunately, it’s even less playable than The Citadel.