Game jams are magical things. These little challenges to make games in short time-spans has lead to some very strange experiments, and Pony Island was one of those. Daniel Mullins, small time indie developer, made a strange little game about a pony at the end of 2014 and fleshed it out through 2015, eventually getting a proper release at the start of 2016. The theme of the jam Pony Island was originally apart of was a single screen, where all action took place on a single screen. To accomplish that, Mullins decided to get a little meta and make the game take place entirely on a single monitor your character was using to play the Pony Island game inside the Pony Island game you were playing. That’s way more important than you’d think.

Pony Island is one of those games that pretends to be one thing, but is definitely more than it initially appears. This is one of those odd moments where one of these games is actually advertised that way, though. From the first release as a game jam project, the title has always been sold as a sort of meta horror comedy as you try to fix and break a game designed by Hell itself, yet despite that little aspect of it being spoiled, there still a lot to discover and find. 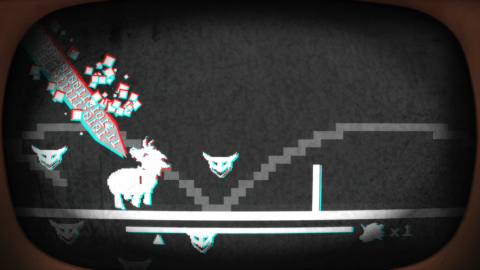 The game presents itself as some old piece of garbage software that requires you to fix it, messing with code logic and putting fallen menu options back in place, only for it to become obvious that the devil himself is using this game he’s made to gather and trap souls. If you want to get out, you have to follow the instructions of a lost soul trying to sabotage the computer you’re forced to use and wipe out all of its data and files. You also have to play along with the devil a little and play his surprisingly decent game that he keeps making awful through terrible design decisions.

The game proper (not the game in the game, just to be clear) is a mixture of puzzle and platforming. You have to play through the Pony Island auto-scrolling platforming segments and master the simple mechanics to get through, but you also need to hack into the game. There are little portals of sorts that appear at certain points that open gateways into the system’s code that you have to click on and enter, at which point you need to manipulate code a certain way to get a desired result. To do so, you drag certain icons in designated spots as the system goes through its logical instructions, changing the outcome of the process to benefit you or hurt the game in some way. 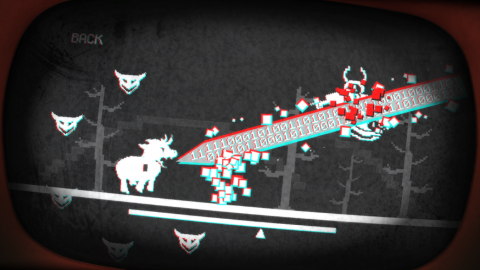 There are also a lot of other strange moments, like exploring different user profiles, figuring out passwords, talking with a text-art demon to discover more about yourself, collecting tickets through esoteric and obtuse steps that border on nonsense, and even showdown with three different demons to destroy the core files through three different gameplay styles. The last one sticks out in particular, as the game goes extra meta and starts messing with you in ways the game hadn’t done before. It even takes into account that the game is being played on a digital service of some sort to give you an extra little mindscrew. And even when you think you know the mindscrew, that’s just further misdirection at points!

The story is a simple get out of hell affair, but if you’re willing to dig, you’ll find a lot of bizarre extra info that paints the entire game in a new light. That’s quite the feat, as this game’s normal tone is just ridiculous. It’s more of a comedy than anything, as Satan proves himself to be a childish wannabe developer who honesty wants to make a good game, but can’t handle the fact that people try breaking his work because it’s borderline unplayable otherwise. He eventually does make a proper final version, one that practically farts glitter and sunshine, only for it to fall apart from poor coding and the inability to flesh out the title with content or an end-state. You can even see some prototypes he made, and they’re all pretty bad in a different way. 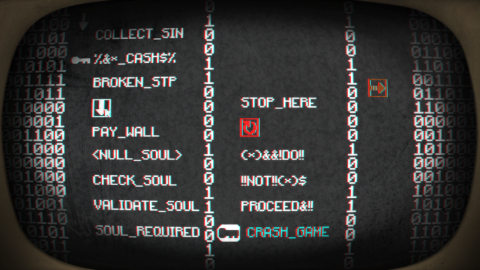 While the game uses tricks from self-aware horror games and creates a dead, gloomy atmosphere, it’s very much a comedy, and a great one at that. The idea of Hell being a terrible video game about being a magical pony is so brilliant and simple that it’s amazing nobody has done it before. The game also has a really fitting style, creating this mix of different graphics to sell the strange story it tells, along with some creative little bits of corruption style sprite art. The music is also rocking, making the pony segments (once you hack it to make them actually playable) a surprising bit of fun.

Pony Island isn’t technically the first to feature “haunted game” theme – that honor goes to Square-Enix’s Nanashi no Game series, which were only released in Japan for the DS. Inspired by The Ring, it features a game much like the NES Final Fantasy, but with strange graphical glitches that suggest something more sinister than a dirty cartridge. Alas, they were bogged down by tedious first person segments, which made up most of the game. Pony Island has no such problem – it’s straight, to the point, only lasts a few hours, and manages to be both creepy and hilarious.