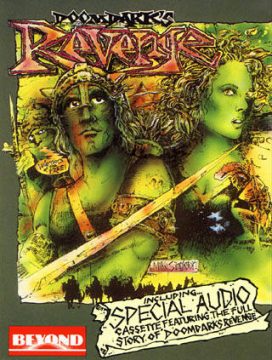 The brave and the free fear no foe. Forth, mighty hosts of Midnight! Unto death or victory we go!

While there were different ways of winning the first game, the second one’s backstory assumes an unlikely situation in which two of them have been achieved simultaneously: Luxor killed Doomdark and took Ushgarak while Morkin threw the Ice Crown into Lake Mirrow. Unfortunately, the happiness was short-lived as when the news of her father’s death reached Doomdark’s daughter, Shareth the Heartstealer, she decided the best course of action will be to lure Luxor into the faraway realm of Icemark and kill him. To do so, she uses a sort of mind control spell to make Morkin fall in love with her (the day before his wedding with Tarithel the Fey!), makes him travel to Icemark and gives him the command of one of her armies that are supposed to fight against Luxor. Yeah, she is pretty evil. 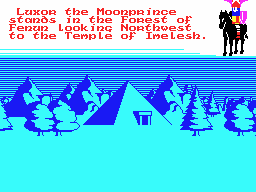 At the beginning of the game, the player controls three characters: Luxor the Moonprince (who, unlike in the previous game, starts with a small army), Rorthron the Wise (they both start the game at the Gate of Varenorn, the only way of travelling between Midnight and Icemark) and Tarithel the Fey (as she set out alone, she begins further north). The player wins the game if he returns to the Gate after saving Morkin (worthy victory) or killing Shareth (‘noble victory’), although the ultimate goal is to do both while also keeping Rothron and Tarithel alive and bringing them back to Midnight (‘overwhelming victory’). The quest to save Morkin is more or less similar to destroying the Ice Crown in the previous game as it’s not focused on warfare and requires the use of a less combat-oriented character (only Tarithel is able to break Shareth’s spell) while killing Shareth is, of course, a strategic victory that requires gathering allies and fighting battles. The game is lost if Luxor gets killed. 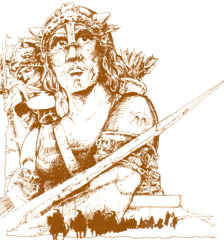 At a first glance, Doomdark’s Revenge doesn’t look to different. The graphics are mostly the same (although there are more sprites this time, with unique ones for the important characters – they’ve even took care to give female characters a sidesaddle), there is still no sound and the gameplay is still focused on first-person exploration, finding allies and preparing for battles. The most immediately noticeable changes are slightly different controls (the movement is the same as in The Lords of Midnight but several actions now use different keys and the general ‘think’ command has been divided into reports on location, previously fought battles, army and current characters’ stats), the lack of ‘seek’ command (characters now automatically seek for items which means that detrimental effects of some of them can be activated just by stepping on their location), a bigger world size and longer waiting for calculations of enemy movement. Different places can also be connected by dark underground tunnels filled with monsters so the game now actually has a real first person dungeon crawling aspect, albeit a very simple one.

The real difference between the games is in the inner workings of recruitment system. While in The Lords of Midnighteverything was hardcoded more or less arbitrarily, Doomdark’s Revenge uses a complex system based on character traits: the chance of recruitment is increased by the characters having same traits (e.g. both brave) and decreased by them having the opposite ones (e.g. brave and cowardly). Moreover, the chances can be increased by recruiting someone’s liege and using him to recruit the vassal and by carrying different magical items. Failure to recruit someone results in a battle in which the player is at disadvantage – thus, sometimes a better idea will be to just attack. There are 128 characters in the game (divided into different races: Fey, Giants, Dwarves and two different types of humans: Barbarians and Icelords – the latter being those guys in horned helmets who fought for Doomdark) and aside from the unique ones (Luxor, Rorthron, Tarithel, Morkin and Shareth), everyone can be potentially recruited – either by you or by the enemy. Interestingly, names of lands and characters are generated procedurally (although the algorithm has a fixed seed so there’s no randomness) based on their location. 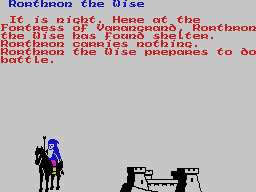 Unlike in The Lords of Midnight, the main villain here doesn’t start with a huge army ready for warfare. Shareth starts the game with a handful of allies and has to gather her armies the same way you do. It’s an interesting choice, bringing Doomdark’s Revenge closer to modern standards of strategy games in which all the players work by the same rules, although it does bring some new problems to the game. First of all, sometimes (it’s not common but it happens) Shareth will get killed in a battle after trying and failing to recruit one of the lords, giving the player an easy victory. Moreover, as recruitment is only possible when the character is alone, it’s beneficial to divide your lords into groups that travel together – which, unfortunately, requires quite a lot of micromanagement. This is especially apparent in the late game when it’s not uncommon to control thirty or forty characters.

Just like The Lords of Midnight, Doomdark’s Revenge was first released on ZX Spectrum and then ported to Commodore 64 and Amstrad CPC. Chris Wild developed an IBM PC port and later a port for mobile devices and modern operating systems (although there doesn’t seem to be anything similar to The Midnight Engine between them) similar to that of the previous game. This time, it is recommended to play the most recent version as the grouping mechanic (as well as the performance improvement, although that’s also present in the freeware PC version) makes late game much less tedious and more enjoyable.

Overall, Doomdark’s Revenge is a worthy follower to The Lords of Midnight. While it’s debatable if it’s better than the first game (the modern version might be but the original is too heavy on micromanagement and waiting for the AI to move), it’s a great game in its own right. It goes without saying that Doomdark’s Revenge is also an extremely ambitious title – it’s a 1985 game that attempts to simulate a fictional world and the characters in it, replacing hordes of evil enemies with a system in which characters with distinct personalities (even if those personalities are just a few adjectives) and different positions in feudal hierarchy interact with each other in non-scripted ways – something rarely seen even today. 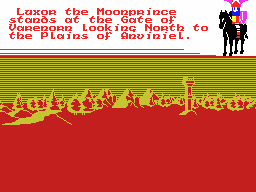 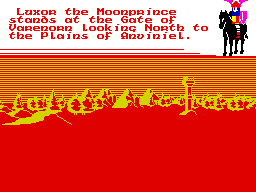 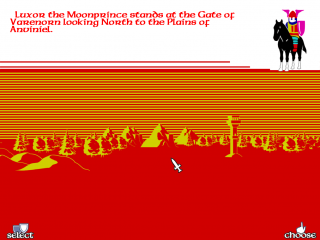 The Eye of the Moon – Unreleased

The Eye of the Moon was supposed to be a followup to Doomdark’s Revenge set in the lands of Blood March, somewhere to the south of Midnight. The game was supposed to feature an even bigger world while at the same time improving the graphics (previous games avoided Spectrum’s color crash by simply not using too much color and explaining that it’s winter and there’s snow everywhere but Singleton found a way of creating colorful and non-clashing graphics while working on a game Dark Sceptre). It was supposed to be set about 40 years after The Lords of Midnight, with the plot about old, dying Luxor sending Morkin on a quest to find the eponymous artifact which would allow him to see the future of Midnight after his death. Unfortunately, the change in management after Telecomsoft bought out Beyond Software ultimately resulted in the game being cancelled. Some of the names and locations (e.g. Blood March) were later used in Lords of Midnight: The Citadel along with the setup based on Luxor being kidnapped while looking for Eye of the Moon but other than that, it’s a completely different game.

Sometime in 2011, Singleton and Wild tried to revive the project. The game was supposed to return to the mechanics of the Spectrum games while also featuring a magic system, revised strategic elements and different recruitment mechanics (Ring of the Moon’s powered were supposed to be limited after it leaves Midnight so that the player can directly control only the inital party, with recruitable characters being given verbal orders while meeting them in the game’s world). The setting, Coromand (first mentioned in the story accompanying Lords of Midnight: The Citadel), was supposed to be much bigger than Midnight without sacrificing detail. Unfortunately, work on the game was interrupted by Singleton’s death in 2012.