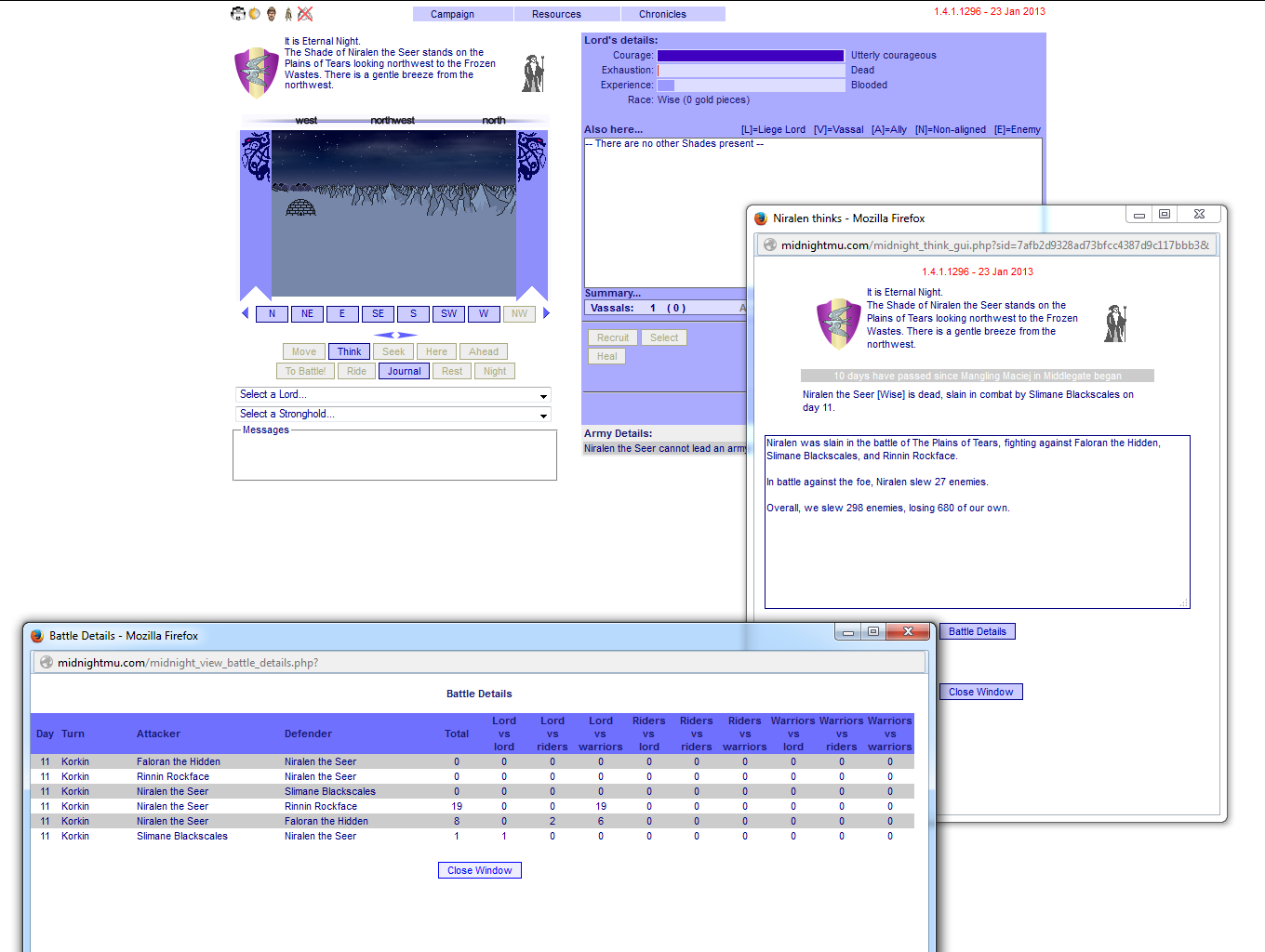 The Warhorns are sounded! Arise, Arise! Now for brave deeds and brave hearts…

Sometime around 2002, programmer Jean-Yves Rouffiac attempted to recreate The Lords of Midnight inside a web browser. The result, which went live two years later, was a game called Midnight/MU – a multiplayer strategy game based on the rules and the map from The Lords of Midnight. It differed from the original in that it didn’t have victory conditions that weren’t related to combat (there are two types of Midnight/MU games: regicide which ends when only one player’s starting lord remains alive and citadel grab in which players compete for the control over the set number of strongholds) and there was no fighting against the computer – just a group of players (from 2 to 8) starting from equal positions, recruiting lords and leading the armies into battle.

Over the years, a small but dedicated community arose around the game so that when the original developer left the team, a group of players took over and continued maintaining Midnight/MU. The game grew over the years, incorporating concepts and mechanics from both Spectrum games and even some from The Citadel (sailing, dragonriding) in addition to those created specifically for Midnight/MU (rogues, mercenaries). The game features modified maps from The Lords of Midnight and Doomdark’s Revenge as well as some original ones created by the players. It’s all very customizable – players choose their race, pick (or create their own) coat of arms, select different sets of graphics and modify the rules of each session.

While the game’s rules are obviously similar to the titles that inspired it (and, in turn, some of the rules from later Legions of Ashworld are similar to those found in Midnight/MU), the multiplayer aspect completely changes its dynamics. Relatively minor aspects of The Lords of Midnight like movement penalties or bigger terrain features obscuring the armies behind them turn into something essential to winning the game. The lack of more or less predictable AI also eliminates some of the popular tactics that exploit it – e.g. focusing on defending the capital and launching a counterattack in the first game. As the game has been in development for years, it also features some mechanics to counteract the most overpowered tactics (e.g. attrition to prevent gathering large armies on a single map square). 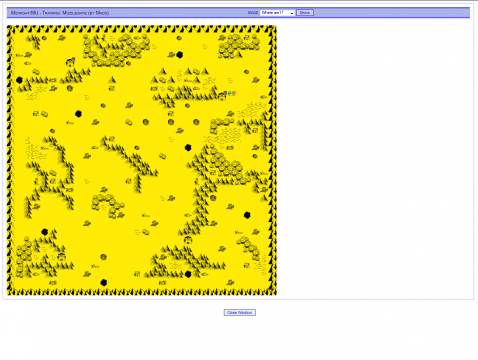 Like other Lords of Midnight games, Midnight/MU is turn-based, with players taking turns one after the other. It’s quite slow-paced, reminiscent less of typical multiplayer and more of a play-by-mail/play-by-e-mail gaming with one player making his turn and the next one being notified that he can move now (there’s no option for simultaneous turn resolution that is so popular with PBEM games but given the first person gameplay this probably wouldn’t work too well here). While smaller sessions of binge-playing are possible (especially on smaller maps and with a turn limit), Midnight/MU can be a great game for a methodical player who doesn’t mind playing a slow-paced 8-player game over the span of a year (that is a year in real life, not an in-game year).

When playing the game, players can access a map of the world which can show either the initial positions of all the recruitable lords or the current positions of the characters controlled by the player. The only way to know where the enemy armies are is by seeing them or getting guidance at the tower. Usually, at the start of each game all the players will try to quickly gather as many lords as possible (recruitment is done like in The Lords of Midnight – while the game does have character traits, they generally work as stat modifiers), preferably in different parts of the map so that those lords will be able to recruit even more lords – thus, planning the fastest route and careful use of characters with movement bonuses as well as rider-only armies (unlike in the previous games, having warriors slows you down in Midnight/MU) is required to succeed. As everything in the game takes time and the effects of places like stones, henges or lakes are randomized, there’s also a bit of risk vs reward about using the ‘seek’ command. In later parts of the game, players have to maximize the combat potential of their armies by reducing exhaustion through the use of supply caravans and giving more soldiers to the lords with better combat bonuses (influenced by exhaustion, fear, experience and traits). Another popular tactic is using weak lords to lead suicidal charges against the enemy – they won’t win but they can slow the enemy down and give the player more time to prepare his defense.

Some of the important choices made during the game are related to finding balance between having a military power and knowing what’s going on. While combat is easier when large armies are kept more or less in one place (while remembering that if there’s more than 10000 people on a single square, there’s a risk of taking attrition damage), it’s also possible to use warriors stationed in garrisons (provided there’s at least 250 of them) to enter the first person view of the garrison’s location. It’s also possible to find out the positions of enemy lords by using ‘seek’ command in the tower but that means using up a few hours of your time. Knowing when to seek (not only to get guidance or randomized effects but also to increase character stats with scrolls and faeries or to convert warrios to riders with wild horses), when to bring your armies together and when to attack is another important factor in ensuring victory – but it’s also something that’s hard to define with strict rules and needs to be learned from experience. There’s also a lot of strategy that comes with temporary alliances (possible in games with at least 3 players, although they have to break down sooner or later as in a standard game – Midnight/MU also has support for campaigns in which players are divided into permanent teams – there can be only one winner).

Midnight/MU is a complex game and the fact that its community is comprised mostly of experienced players who know its ins and outs adds to the fact that it’s a pretty hard game to get into. Lack of proper documentation (the manual available for download from the game’s site is quite outdated as it was written in 2005) can also be a barrier as the only way of learning the game (besides playing it a lot) is reading the forum. Fortunately, the Midnight/MU community is a very helpful one, not above giving helpful tips to newbies and playing training games with them. Just don’t expect to win any games before putting some serious work into it. 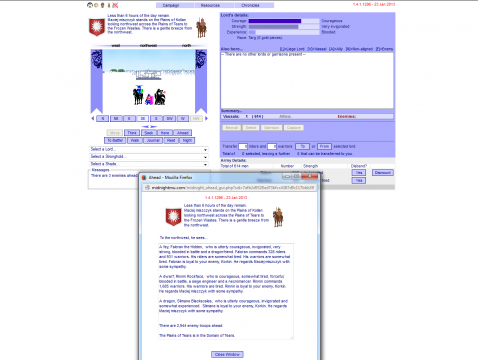 The look of Midnight/MU is focued more on functionality than the aesthetics, with the menus taking a large portion of the playing area and the first-person view in a small window on the left side of the screen. Players can set the graphics to the original The Lords of Midnight look, The Midnight Engine one and a new LOMColour style which, as the name suggests, is a colored version of the original spriteset. The latter is probably the best looking option, putting some surpirisingly beautiful views into the low-res pictures you’ll be looking at. The functionality focus generally works when handling combat, recruitment and exploration but learning some of the game’s new functions is less intuitive – managing your caravans and strongholds can be a pain unless you learn exactly what you need to do and why is this or that button grayed out. The purpose of shades (ghosts of fallen lords) is similarly difficult to discern and one can easily play a few games without noticing the existence of rogues (characters with an ability to hide, sneak onto the square taken by the enemy without going into battle and poisoning the enemies to lower their strength).

There is some great level design in Midnight/MU as existing maps from the previous games were modified for better multiplayer balance and the new ones were created specifically for this game. The potential levels vary by size and theme but are all both fine-tuned not to give different players too much advantage and to fit within the lore of Mike Singleton’s games. Those new maps are also designed with the game’s new features in mind with rivers and seas for the players to sail through, twisting passages through potentially impassable (depending on game settings) mountains and marshes that slow down movements of the armies and make attrition more likely.

Midnight/MU is a game that’s easy to start playing but difficult to master – and unfortunately, more often than not you’ll be playing against those who’ve already mastered it. It’s a well-made game (despite a few bugs) and a great example of how introducing the human players can drastically change the experience. It’s a shame that it’s so unknown to the wider public – both because good games should be better known and because as almost everyone in the game has been playing for years, it’s hard for the occasional beginner to find players at similar skill level.