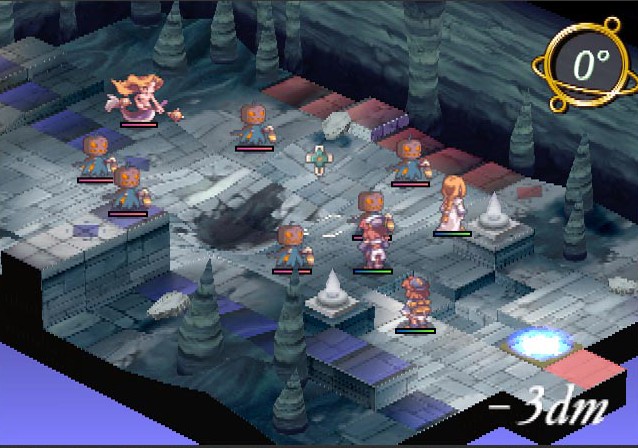 Nippon Ichi’s start in 1994 was hardly glorious. They became known for creating tile puzzle games and other irrelevant publications for the PlayStation (one of which was published in America by XS Games until the title Jigsaw Madness). Other than the quirky Cooking Fighter Hao, Nippon Ichi first gained a modicum of popularity with Marl Kingdom: Adventures of the Puppet Princess, an amusing (if somewhat easy) RPG featuring Disney-like musical numbers and impossibly sugary character designs. Atlus took a chance and localized the title for America under the name Rhapsody, but it flopped horribly.

Two more games appeared in the Marl Kingdom series in Japan, before Nippon Ichi published its first true SRPG, La Pucelle. An offshoot of the Marl Kingdom series, La Pucelle took the basic concept of strategy RPG stalwarts like Tactics Ogre and turned it on its head. Nearly all games featured epic plots set in medieval times involving the horrible atrocities of war – La Pucelle instead featured colorful anime graphics, in a world filled with smiling mushrooms and talking pirate cats. Its heroine was a young woman named Prier who would rather slack off than to continue her studies. For the first time, the SRPG genre finally stopped taking itself so seriously. It wasn’t about teaching you how tragic life is – although there is a fair share of drama – but was instead about making you laugh.

But it was more than just La Pucelle‘s story and setting that set it apart – while many SRPGs were known for their extreme depth and next-to-impossible difficulty, La Pucelle featured in-depth character and gameplay systems that were completely different from the norm.

The first true strategy RPG created by Nippon Ichi, La Pucelle is a pseudo-sequel to Marl’s Kingdom. While the setting is still the same French-inspired world, it also takes place a century or two after its predecessors. So while there are some references (the Rosenqueen shop, for example), you won’t be running into the same characters.

However, La Pucelle does have quite a colorful cast: 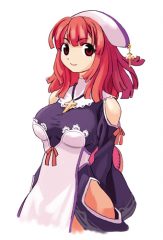 Prier wants to be the Maiden of Light, but she’s far too lazy and obnoxious to be even remotely qualified. Even though she’s quick to anger, her heart is in the right place. Although she’s deeply saddened by her parents’ death, she doesn’t let her emotions show, and attempts to portray herself as a very strong individual. Her primary attacks include a whack with her baton, an uppercut to the jaw, or a kick to the naughty-bits. 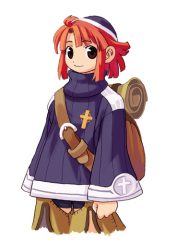 Culotte is Prier’s little brother (and doesn’t exactly have the manliest name in the world – a “culotte” is a real girly-girl skirt.) He’s sick of being treated as a child, even though he’s far more mature than Prier. Culotte attacks by throwing apples, lollipops and other such items.

Alouette is far closer to becoming the Maiden of Light than Prier ever will be. Calm, cool, and collected, Alouette trusts every word of the Holy Book, almost to a fault. She is constantly annoyed by Prier’s childishness, and often puts her in her place. Alouette usually attacks with a quick slap to the face or whack of a bible.

Croix is a mysterious bounty hunter with amnesia. He enjoys playing the part of the mysterious badass, an effect amplified by his cool shades. Croix fights demons the way they should be fought – with a shotgun. A holy shotgun, at that. 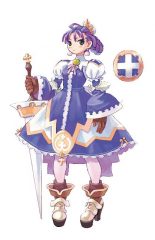 Princess Eclair is just thirteen years old, but she’s already more or less in charge of the kingdom. Having been friends with Culotte and Prier since childhood, she doesn’t seem to mind their antics. Eclair eventually grows a “dark” side that, naturally, involves her wearing skimpier clothing (this is pictured on the cover of the American game, so shut your mouth about spoiler warnings.) Eclair also bears a huge resemblance to Queen Gradriel from the Atlus cult classic Saturn/PSP game Princess Crown. 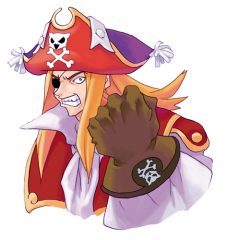 Homard commands an airship known as the Escargot. His crewmembers are cute little pirate cats named the Chocolat gang. He tries to be all impressive, breaking out his twin swords to impress the ladies, but it’s a bit hard to take him too seriously when he has an adorable, purring army of felines backing him up. Homard is actually a descendant of Cornett from the Marl Kingdom games. 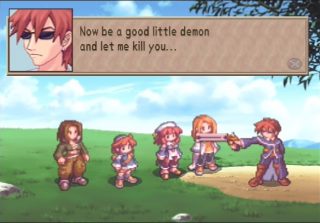 Prier, Culotte and Alouette are members of La Pucelle, a church organization designated to hunt down demons and save the children of the Goddess Poitreene. While it’s loaded with Christian imagery and ideals, it’s more inspired by the religion rather than directly nabbed from it. And unlike other Japanese RPGs that seem to portray Christianity as being somewhat misguided, La Pucelle actually sheds some positive light. It’s a nice change from the nihilistic “GOD IS EVIL” message from the likes of Xenogears or Final Fantasy Tactics. While the first few chapters just serve to introduce the characters and gameplay, the story starts rolling several hours in, which involves a rival church whose intentions may not be so pure as La Pucelle’s. The game is broken down into chapters, each with a self-contained story that explores the character’s backgrounds, or slowly sheds light onto the plot. Most chapters contain multiple endings, depending on your actions during the stage, although there’s only only one conclusion at the end of the game.

While there’s a small town to run around in, and a world map to choose destinations, a majority of the game is spent in battle. Viewed from the typical 3/4 overhead view, the fights unfold a bit differently than most other strategy game. When it’s your turn, you’re free to give orders to any your characters and move them around as you see fit. At any point, you can tell them to begin battle all at once, which zooms to a small side-view cutscene of your characters duking it out. All adjacent characters also join in these scuffles, which makes careful positioning of your allied characters extremely important. Unfortunately, these little cutaway segments tend to drag the battles on longer than they should, and there’s no way to turn them off. Some of the math that goes into these battles seems a bit odd too. In one turn, you could do 30 points of damage to an enemy. In the next turn, using the same attack against the same enemy, you could do five. It just varies too wildly. The equipment system is a bit looser than most SRPGs – you’re given four slots, and you can equip any number of offensive or defensive items, giving you more freedom to balance your units the way you want them to. 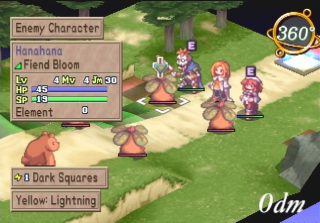 The Dark Portals are a nifty little innovation not seen in any other SRPG. These little square spawn enemies if they’re not purified quickly enough, but they also let off a flow of energy. By standing on these flow, you can redirect the energy in any direction you want. If you aim at it an enemy and purify the portal, it will cause a chain reaction of explosions, damaging any foe its path. And if you manage to create a large rectangle with this energy, then purifying it will unleash a miracle attack that decimates anything within its borders. It’s a cool system, but it’s hard to take advantage of properly – setting up these attacks is a lot of work, although sometimes the payoff is worth it. Unfortunately, the constantly respawning enemies can, once again, drag the battles on and on. You either need to dedicate a set of your characters specifically to purifying the portals (and thus ignoring the enemies) or just try to clear the playing field as fast as possible before more bad guys enter the fray.

While you can’t create additional units the beyond the additional story characters, you can recruit practically every enemy of the game to fight on your team. Just purify them many times, then kill them, and they’ll happily join La Pucelle. They level up just like any other character, but you can also train them to modify their statistics a little – try spanking them to give them a bit of discipline, or give them a porn mag to make them happier. It’s all menu based so you don’t get to see any of this stuff happening, but it’s an amusing addition. You can also sacrifice characters to the Dark World, which can yield exclusive items. 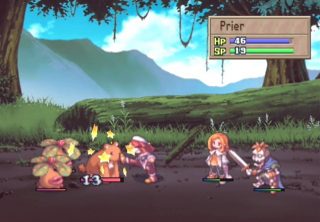 The graphics are barely any better than Final Fantasy Tactics, which, for the record, came out for the PlayStation in 1998. While the playing fields are polygonal, the characters are all low-resolution sprites. The only interesting graphical effects occur with amusingly overblown special attacks, that often send opponents flying into the air, hurtling around the field and smacking back down into earth. It does have are incredibly appealing artwork, distinct enough from your usual clichéd anime designs that it creates a sense of uniqueness not found elsewhere. And it’s not only their artwork – Nippon Ichi characters tend to stand out far more than your typical Japanese role playing stereotypes. This is mostly due to the extremely goofy humor, but is perfectly executed due to the extraordinary effort put into their localization. Every one of them has superb writing that doesn’t lose anything in the translation, and they all have incredibly well done voice acting. The glory is in the details too – item descriptions are usually filled with bizarre (and occasionally hilarious) comments, and monsters usually have strange names that allude to other video games.

They may not be lookers, but SRPG fans know it’s really more about the gameplay (and to a lesser extent, the characters and story) than the graphics. Compared to Fire Emblem and other similar games, which emphasize pure strategy, La Pucelle and subsequent Nippon Ichi games are largely about how you build your army, rather than what you do with it. Additionally, the options, at first, seem a little overwhelming, considering you’re not always given guidance on how to build your party. And despite the cartooniness, there are still screens upon screens of cold, unfeeling statistics. But La Pucelle somehow makes playing with numbers seem fun, in the way that most algebra classes don’t.

All in all, La Pucelle is a fine game. It’s only real fault is that it’s a bit unrefined compared to its follow-ups This was especially evident to American and European gamers – while the game was released first in Japan, it was the second to published in other territories, after Disgaea. It felt like a step backward because, for all intents and purposes, it was.

However, La Pucelle didn’t make it to America without a few alternations. Newcomer Mastiff Games didn’t want a controversy on its hands with all of the religious imagery, so they took out all of the crosses (including the ones on the character’s costumes), and ditched the cigarettes while they were at it. While these cuts were completely unnecessary it doesn’t really detract from the game. In 2004, La Pucell was re-released in Japan, adding a sound test, a New Game+ features, and a few extra boss battles. This “director’s cut” was the version released in Europe by Koei. It was also released on the PlayStation Portable but only in Japan.