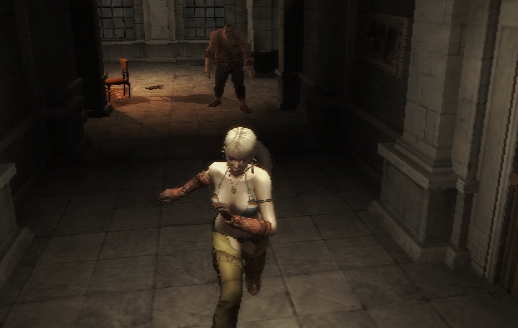 Clock Tower 3 technically spelled the end of the franchise, but it did continue on, spiritually, at least. With new direction, under the guidance of Noboru Sugimura of the Resident Evil and Onimusha fame, Capcom developed Haunting Ground. It stars a new protagonist, who endures a gauntlet of traps and brand new Stalkers in a similar manner to Clock Tower 3. It gained a cult following for how it further explored (and abused) some of the most morbid sexual innuendos in gaming horror history since Phantasmagoria. 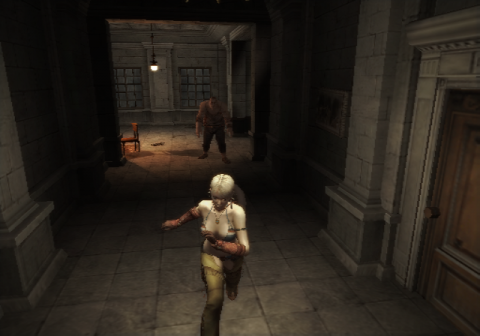 After being knocked out from a car accident, young Fiona Belli wakes up and finds herself trapped inside of a cage inside of what seems to be a butcher’s slaughterhouse. For some reason, her cage was carelessly left unlocked. Quickly escaping the dangerous place, she soon finds herself trapped within what seems to be a very ancient castle. Wandering around, she starts to uncover the mystery behind her kidnapping and an unlikely ally – a German shepherd named Hewie, who defends her from the crazy residents of this cursed place.

It isn’t long before she runs into a colorful cast of villains, each with their own twisted reasons to hunt down Fiona, including the mentally challenged Debilitas, the homunculus Daniela, and hooded human Riccardo. Constantly on the lookout for her, she’s forced to run, hide and eventually drive them to their demise in order to escape their malevolent intentions of killing her, raping her or get her “Azoth” (an alchemic “essence” hidden in her womb for creating artificial life) in order to inherit eternity. 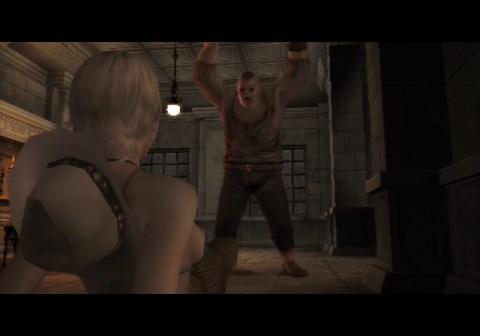 The main aspect that makes this a spiritual sequel to Clock Tower 3 is the gameplay. Haunting Ground still plays and feels like its older cousin, complete with clunky character handling and useless combat mechanics. Alchemy-based weapons and kicks from Fiona will do no less than hold back the Stalkers for a short while. In order to get rid of them, you’ll need to hide until they walk away or permanently kill them in the process. The most interesting part of this is Hewie. He can be commanded to do things that range from hiding, standing guard and attacking. Whether he obeys or not, it’s up to you to scold him or praise him. This creates a small bond between you and him that affects further events, such as him not helping you through certain parts of the game, or wholeheartedly attacking you.

The “Panic Mode” is back, but this time around there’s a twist – the screen will fade to a subtle gray/sepia color, along with an eye-straining saturation that will cloud your vision and have you double-guessing where you’re running. Like before, this mechanic has become annoying rather than interesting. Having already built a solid foundation in graphics with Clock Tower 3, Haunting Ground boasts several improvements and even more details than ever. The backgrounds are well rendered (with barely any loading between rooms) and music as a whole fits perfectly every situation. 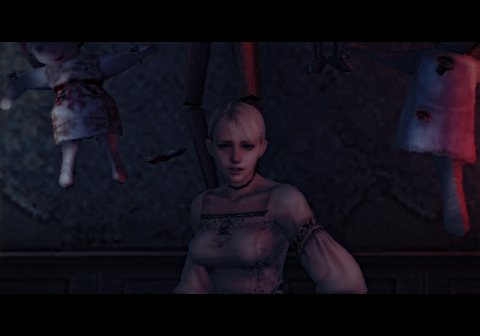 The characters are also well modeled with only the Debilitas prancing around the uncanny valley. Also, from the trailers to the very cut-scenes of this game, there’s a character that is a walking eye candy from head to toe (literally): Fiona Belli herself. Capcom was really all over making this girl a living sex machine – she even starts off naked. Not only she was carefully conceived to be insanely attractive, but all the male characters are after her in more perverted ways than one, and the developers even considered that her clothes should be torn apart little by little upon taking damage, which was dropped pretty early on for obvious reasons.

Instead of having her clothes scratched off, you can unlock different costumes for her to wear. Whenever in-game Fiona is dressed differently, that particular costume is unlocked for later. Conventionally, getting any of the games’ different endings also comes with a different wardrobe as a reward (and playing the game in Hard difficulty will also change the costumes of every Stalker). Hewie will also get different appearances that give him slightly different gameplay elements, such as being more disobedient German Shepherd with a more powerful attack, or the invincible Stuffed Toy costume. Fiona herself will get a couple weapons with her Leather (whip) and Cowgirl (gun) instead of her usually clunky kick.

Unfortunately, Haunting Ground, like other Capcom games back then, was an experiment of sorts. Reusing gameplay elements from the previous game and not selling it under the same name was an easy way of cashing in on a new franchise. But instead, the franchise got canned completely, resulting in a somewhat worthy adventure but a sour end to what was once the mother of all horror games.