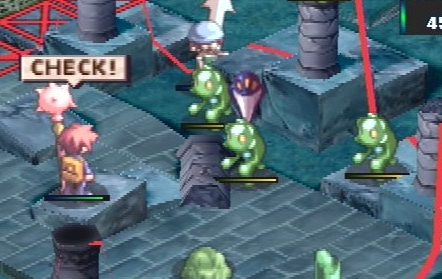 Nippon Ichi’s Disgaea was an international success, an SRPG with an inviting sense of humor, deep mechanics, and plenty of opportunities for grinding. While they would eventually return to the Disgaea well for many sequels, its immediate follow-up, Phantom Brave, is much more experimental, altering both in its setting and its mechanics. Given the success its predecessor, it’s pretty clear that the developers could’ve played it safe by delivering more of the same, but it’s pleasantly shocking that they didn’t. 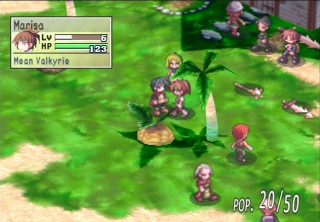 Phantom Brave takes place on a series of tropical islands, in a world inhabited by not only humans, but anthropomorphic owls and wolves as well. While it seems like a paradise, nasty monsters have been surging up, as per the RPG tradition. 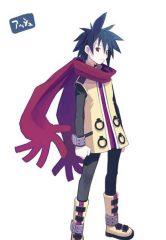 When we first meet Ash, him and his comrades are about to be ruthlessly slaughtered by a group of demons. His friends are doomed, but Ash is saved from total death by being turned into a phantom. Ash’s mission is to protect the infant daughter of his fallen comrades, a mission he takes very seriously. He helps raise the little girl, named Marona, and acts as a surrogate big brother. Although normally invisible to everyone but Marona, he can apparate into physical form at will. Ash desperately cares for Marona, although he constantly wracked with guilt – for he is responsible for her being termed “The Possessed Chroma” and thus universally despised by the populace at large.

A sweet little 12-year old orphan, Marona lives on an island and works as a Chroma (a demon hunter, more or less) in order to pay the bills. She’s possessed by her parent’s dead friend Ash, which has given her something of a nasty reputation (despite the fact that Ash is really quite a nice guy.) Marona is very naive and trusting, even though she is constantly faced with prejudice and hatred. Being that she is not a phantom, Marona is the only character in the game that will not disappear from the battlefield after a set number of turns. 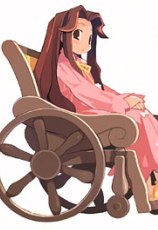 Castille isn’t playable , but she’s still one of the most important characters in Phantom Brave. Forever bound to beds and wheelchairs due to a crippling sickness, Marona is first hired by Castille’s parents to rid their island of monsters. Castille is one of the only humans who isn’t scared of Marona, and the two eventually grow to become best friends. 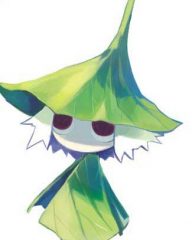 Putty is technically just another type of creature found in the game, but there’s a very specific one that Marona grows attached to. As such, Putty is kind of the mascot of Phantom Brave. 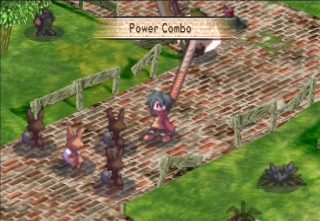 The beginning chapters of the game are almost painful. The first story begins as Marona saves a small village from a group of demons. All of the villagers are a little wary of Marona, given her “possessed” status and all, but they decide to take their chances on her. Once Marona completes the job, a tiny little owl child stumbles, bringing a lollipop to his savior in gratitude. Before the child can reach Marona, the mother runs out, chastising her son for getting close to such a “monster”. Marona just shrugs and sighs, but the chapter ends with the distraught girl alone in her room, crying herself to sleep. It almost gets worse from there – seeing the harsh realities that the world has dealt poor Marona is like seeing a kitten tossed into a ring of pit bulls. The story gets a bit more uplifting as it goes along, as she eventually finds acceptance and makes friends. Some may find it a little overwhelming (or even melodramatic), but it helps shape Marona – and her constant protector Ash – as two extremely endearing characters. 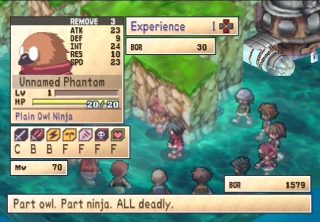 Obviously, this is somewhat heavier stuff than Disgaea. While that had its share of drama as the game progressed, it also had quite a light-hearted sense of humor. That goofiness is somewhat absent from Phantom Brave, something than many fans were disappointed in. The huge character portraits during the story scenes have also been replaced by large character sprites. While this may seen like a downgrade, they’re extremely well animated, and do a better job at portraying a variety of emotions. On the audio side of things, Phantom Brave also has the best soundtrack of any of the games, filled with charming flutes, child-like singing, and insane violin solos, all welded in with the usual upbeat melodies.

Beyond all of the story and graphics and music, the basic nature of the game had been drastically altered. Phantom Brave begins by ditching the grid-based movement system, in lieu of giving your character free movement over the maps (similar to Breath of Fire: Dragon Quarter.) Whenever a character’s turn comes up, a circle appears around the unit, showing the maximum distance that they can move. That’s not the only thing that’s changed – each character’s turn order is determined by their speed statistic (much like Final Fantasy Tactics.) 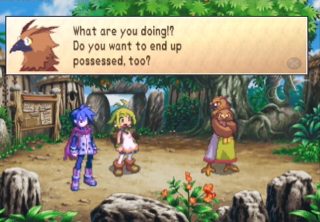 Also completely new is the Confine system. Since all of the characters (other than Marona) are phantoms, they need to be confined in some kind of objects before they can manifest themselves in physical form. Each battlefield has a variety of items that you can possess, each which alters the statistics of that phantom for the duration of the battle. Confining a character in a rock, for instance, will increase their strength and HP, but make them slower. Confining them in a plant may weaken them physically, but grant greater magic and resistance.

But wait – it gets more complicated. Certain objects on the battlefield influence other objects. Say, for example – there’s a rock that gives a 30% attack boost to all of the trees in the area. Confining characters in those trees will also give them an attack boost, as long as that rock remains intact. For another example, there could be a brick that gives a 50% defense boost to every enemy in the stage. Naturally, you’re going to want to destroy that brick in order to level the playing field. Paying careful attention to these influences is vitally important to victory, even if the confusing menus, which fill the screens with connecting lines, can be a little confusing at first. 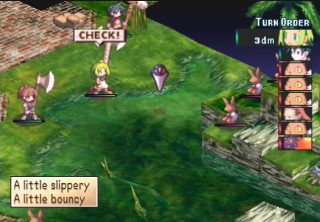 The most controversial aspect of Phantom Brave is that each character can only be summoned into a play before a limited number of turns. After inhabiting the levels for a certain amount of time (between three and eight turns, depending on the character class), they’ll disappear, dropping whatever weapon they were carrying and unavailable until the next level. At first, it creates an overwhelming amount of pressure, since you can’t really fight at your own pace. It also seems like a cheap attempt to force you to build a gigantic array of characters, so you’ll never run out of characters to summon. But after awhile, you get accustomed to it – planning which characters to bring out and when becomes a vital part to your strategy. It becomes a game of trying to deal out the maximum amount of damage in the shortest time possible. Beefing up Marona is also extremely important. This can be rather difficult, given that she is inherently a weakling – since she’s the most important character in the game, you almost wish she was a little more customizable.

All of this may seem a bit out of the ordinary, but that’s really what makes Phantom Brave so special, even more so than other Nippon Ichi SRPGs. It’s certainly more than a little intimidating, which is why novices should definitely start elsewhere. But once you get into the groove, you’ll be plotting out confinement strategies in no time. 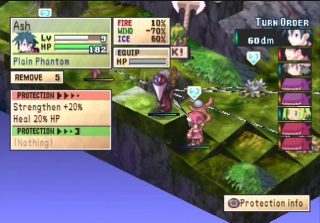 The character creation system is much the same as Disgaea – any character you have encountered during the course of your battles can be summoned onto your side. The equipment system is a bit on simplistic – each character can only equip a single weapon at a time, which affects both offense and defense. Healing items are also completely gone, so make sure you have a character with a cure spell or two. There are plenty of other customization options to make up for this. Every item and character can be assigned a “title”, which slightly increases or decreases their stats. Additionally, characters can be fused with other characters (or even weapons) in order to combine attacks or statistics. There’s a random dungeon generator, but you can replay old missions in hopes to finding new characters.

As usual for Nippon Ichi titles, there’s a lot of post-game content – four characters from Disgaea (Laharl, Etna, Flonne and Vyers) become playable after completing certain things, and Myao from the Marl Kingdom series, as well as the Eringa mushroom creatures, makes cameos too. 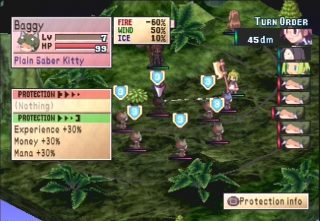 While many fans rejected Phantom Brave for the crazy turn limits and dramatic story, the deeply original gameplay and characters helped turn Phantom Brave into a fantastic title in its own right. It has received a number of ports and revisions in the subsequent years since its release. The “Best” release in Japan adds more post-game stuff including, an extra boss, Pringa XX. The Wii version, subtitled We Meet Again, adds the tweaks from the revised PS2 version plus a whole new scenario called Another Marona. It’s an alternate world where every human has been killed except for Marona, who then meets up with a girl that looks suspiciously like her (but evil) but Carona. Intended for people already familiar with the game, it’s accessible from the outset but much harder. It also lets you recruit some of the NPCs from the main, in response to some of the complaints from the original release that the only “true” playable characters beyond the generic recruitment were Ash and Marona. These can then be used in New Game+ in the main game.

The PSP version, subtitled The Hermuda Triangle, is based on the Wii version plus adds the eponymous new post-game dungeon with characters from other Nippon Ichi games like Hero Prinny (from the PSP side-scrolling series), the Unlosing Ranger from Zettai Hero Project, Zetta, the protagonist of Makai Kingdom, and long-suffering wannabe protagonist Asagi, plus it  presents the screen in 16:9. The Windows version was released on Steam, and includes all of the enhancements of the PSP version, with the ability to run at much higher resolutions (though the smooth backgrounds stand out compared to the low resolution sprites).