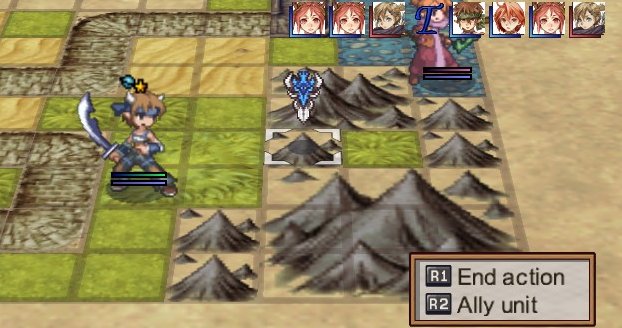 Soul Nomad is a weird game. A really weird game. It mucks with the tactics RPG formula far more than Phantom Brave or Makai Kingdom ever did, and if nothing else, it really shows how creative the guys at Nippon Ichi can be. 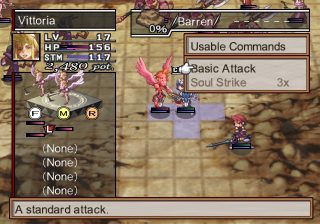 The story tells of a land in the throes of destruction, as it used to be ruled by a trio of vicious evil begins known as The World Eaters. The World Eaters have laid dormant for quite awhile, but this is unknown to a group of villagers who lived underground for centuries. The hero and his compatriots climb out of their cave into the real world to explore the world. However, the hero is possessed by Gig, the ruler of the World Eaters, who wants nothing more than to take over the earth once again. 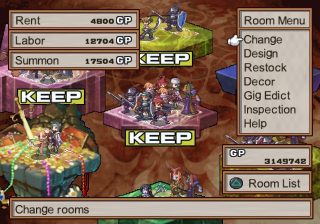 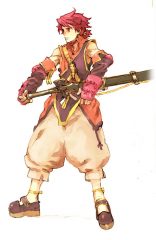 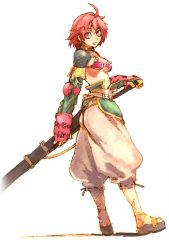 The Hero / Heroine is the only member of your society that is strong enough to contain the soul of Gig. Soul Nomad is the only Nippon Ichi game that puts you, the player, the shoes of the main character. You can pick your gender, which in turn slightly influences the storyline. Technically you never talk, but you can pick dialogue choices at certain junctures, even though there’s usually only one option. 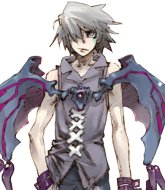 Gig is a malicious being that used to rule over the World Eaters, but has been left without a body. He takes over your character, waiting for you to die so he can get back to ruling the world. He’s definitely a vicious bastard, without a shred of remorse, and ruthless taunts anyone who gets in his way. He also offers his immense power to you at certain points, although it’s usually wise not to take him off on his offer. 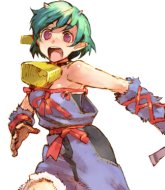 Danette is the protagonist’s close friend who ends up joining you on your journey. She’s Nepp – that is, half cow, which is why she wears a huge bell around her neck. As a result, she’s not exactly the swiftest person around, and Gig taunts her mercilessly. 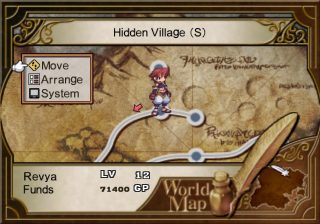 In addition to the main character and Danette, there are over a dozen other characters that join your party, in addition to the huge number of units that can be drafted. Practically any monsters can join, and there are a number of different races, from the bovine Nepps to the mermaid Nereed to the bestial Phynx. Amusingly, one of the characters, a scantily clad girl named Lujei, also appears in Grim Grimoire. Although Grim Grimoire was actually created by Vanillaware (who made Odin Sphere), it was published by Nippon Ichi, and the character is a joint creation between the two companies. 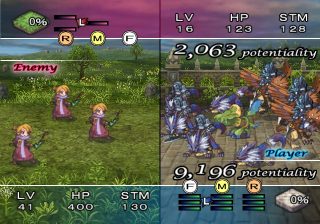 Compared to their previous titles, Soul Nomad is a lot darker thematically. For instance, Gig is the standard arrogant evil character (like Laharl or Zetta), but he’s not presented in a comic manner, and actually comes off as more sadistic than amusing. Similarly, the plot is closer to the more serious Fire Emblem games, although there are still some bits of humor here and there. Amusingly, the game lets you know when there’s an option for a “bad ending” and advises you to save beforehand if you want to see the resulting cinema. 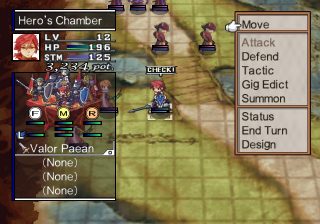 Much like Final Fantasy Tactics, you move between destinations on an overhead map. The battles, however, are completely different from standard Nippon Ichi fare. The fields are all flat, drawn maps that your characters move across, rather than the standard 3D terrain. The character turns are like in Phantom Brave, with the unit’s speed determining where in the queue their turn will fall. Since there are no obstacles and no height restrictions, your units can walk on almost any surface, although some terrain have movement penalties. 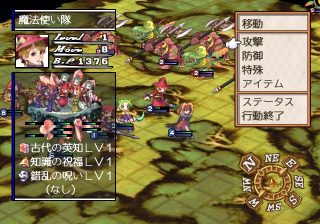 The combat system is somewhat inspired by Ogre Battle. Instead of placing all of your units onto the field, you control groups of units, which appear as a single leader character on the map. In each group, you place various units in different formations. Different types of units have different attacks depending on where they’re placed – for instance, a healer in the middle row will heal one character, but while placed in the back, they’ll heal all characters. Naturally, melee characters attack better in the front row – where they’re susceptible to more damage – and magicians and archers work better in the back rows. When you attack another unit, it zooms into a close-up of all of the characters doing battle. Again like Ogre Battle, there’s no user involvement in these fights, as it’s all done automatically by the computer. If the leader falls, then the entire group dies and is removed from the map. This may remind fans of the slow paced battles in La Pucelle, but you can turn off the animations so these fight scenes go by much, much faster. 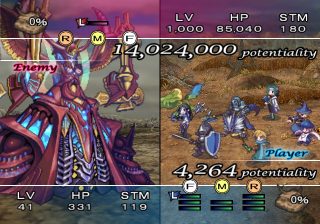 There are a number of other factors which determine how strong your attacks will be. Much like most RPGs, your stats will change depending on what type of terrain the units are on. Each unit also has a “Tactics” command, which allows them to boost various statistics. There are also “Gig Edicts”, which are basically consumable items with a variety of buffing, debuffing, and healing effects. Your attack strength is also dependent on your unit’s stamina, which slowly drains over the course of the battle. Naturally, stamina also drains from enemies, so it’s a good idea to try to wear down your foes while keeping your own stamina high. However, if your Stamina is below 80%, you can execute a number of special attacks, which will directly target the leader or specific panels. You can only use these a limited number of times per battle, but it’s the only way to specifically attack certain enemy characters. They’re usually determined by combinations of various story characters. 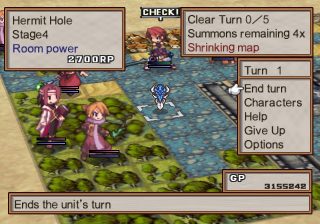 Like other Nippon Ichi games, the amount of customization is absolutely insane, but a lot of the terminology is so strange that it’s hard to figure things out at the beginning. For example, your unit formations are called “Rooms”, and the units themselves are called “Manikins”. Thankfully, when you draft new Manikins, you can choose their starting level, so there’s not quite as much grinding as other games. There are a number of different types of rooms, each with different layouts and status effects. You can’t actually design them yourself, but rather, you keep randomly generating them until you come across one that you like. Depending on the units you stick in each room, you’ll need to pay “Rent” when you summon them into combat. You can also equip special equipment called “Decor” which modify various statistics. If you want to strengthen your Room, you conduct “Inspections”, which is basically Soul Nomad’s version of the Item World. When you fight through these randomly generated stages, you can increase the abilities of your room, eventually allowing you to stick more units inside of it. You also gain Room Points, which can upgrade various stats of each individual unit. Finding creative ways to stack all of the percentages will eventually allow the Room leader to become an absolute beast. Your Room’s strength is measured in “Potentiality”, which is a basic measurement of how powerful the Room’s stats are when added together.

Compared to Fire Emblem, Nippon Ichi games have usually been more focused on how your build up your characters, as opposed to how well you perform in combat. Soul Nomad takes that concept even further – your positioning and movement plays a distant fiddle to how well you’ve built up your Rooms. It’s a strange mix, considering that the balance seems even more off skew than other Nippon Ichi games. You can steamroll over certain battles without a second thought, if you’ve built up efficiently. 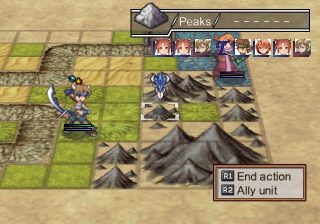 As if Nippon Ichi weren’t already reinventing the way you build your army, there are a number of other strange touches. In order to advance your shop levels and get more powerful items, it’s not enough to simply buy a ton of stuff – you actually need to beat the store owners in a battle. Similarly, sometimes when you’re creating Rooms, you’ll find some ruffians inhabiting the squares that need to be kicked off. Most of the town navigation takes place in menus, which is a little dull looking, but you can try to beat up people, steal stuff from them, or otherwise play a variety of tricks using Gig Edicts. In addition to the normal Nippon Ichi extras like multiple endings, there are a couple of cool bonuses – you can run into Asagi again (who is just breaking free of Zetta’s control from back in Makai Kingdom), and you can take on the Demon Path, where you and Gig become the bad guys and fight all of your old party members. You can also run into Laharl here. 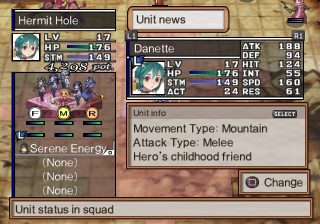 Nippon Ichi strategy games have rarely been particularly great looking, but due to the style of maps used here, it looks extremely barren. Most the cutscenes take place with sprites and small portraits, which is a bit boring compared to the huge portraits used in Disgaea. Some cutscenes feature full portraits, but they’re relatively sparse. The artwork here is done by toi8, who did some artwork for Makai Kingdom. His style is much more serious from Harada, but it’s still damn good, even though the sprites look mostly the same as previous titles. The music is pretty standard Tenpei Sato fare, but there’s very little that’s actually memorable.

It takes quite a long time to get used to Soul Nomad, especially since it’s so different from practically every other strategy RPG out there. There are numerous quirks that quickly grow frustrating, most of them involving some random aspects – it’d be nice if you had a little bit more control over how fights played out, for example. For these reasons, combined with the seriousness of the storyline, longtime Nippon Ichi fans may themselves a bit confused or disappointed. But for everyone else that loves tinkering with unit placements or finding crazy ways to level up their characters, Soul Nomad definitely won’t disappoint.