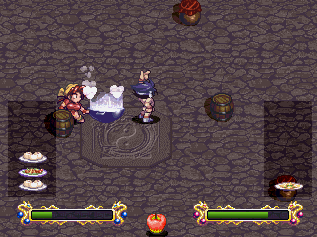 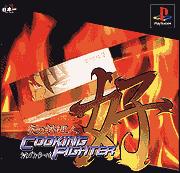 On paper, Cooking Fighter Hao sounds brilliant. Created by Nippon Ichi Software, before they started with Marl Kingdom or any of their strategy games, Cooking Fighter Hao is a video game version of Iron Chef, mixed in with a lot of violence and anime-style over-the-top wackiness. And so, it’s a little sad that it’s such a crappy game.

The star of the game is Hao, a Chinese guy who wears a flowing red cape and wields a deadly ladel. At the beginning, he walks into a restaurant, and impressed everyone with his cool demeanor. He asks the head chef if he’s seen a white haired girl. Suspecting that the young stranger is a minion of the evil Ajimaou (Flavor Demon King), he attacks Hao with a ladel, who effortlessly catches it with his chopsticks. 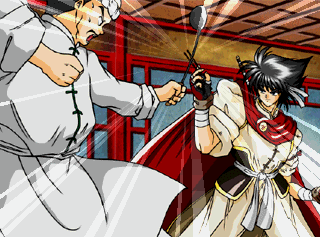 Hao is clearly not a man to be messed with.

Then some punk guy walks into the restaurant. Turns out THIS guy is indeed a soldier of Ajimaou, so you’ve gotta fight. Naturally, all challenges are done with cooking. But before hand, there’s lot of screaming. Close-ups, speed lines, the whole works. “Cooking is power!” the bad guy screams. “No! Cooking is heart!” Hao yells back at him. The screen fades out, like a commercial break, where you’re then asked if you’d like to save. The whole game plays out like an anime episode, right up to the “next episode” scenes at the end of each chapter. The problem is, like a lot of anime, they tend to talk a lot and not say much of anything. All of these story scenes are pretty poorly animated, and the artwork is nothing spectacular either. Even skipping through the voiceovers as quickly as you can, each segment can take at least five minutes just to get to the actual game.

Cooking battles take the form of an overhead action game, with your characters represented by super deformed sprites. Each level has a specific kind of animal – chicken, turtle, lobster, horse, sea bream, crab, pic, eel, and cattle. You basically run around, beat the animal into submission with your weapon until it’s stunned, then create a meal out of it. By pressing the Circle button, you’ll simply stir fry it, but if you hold it down and rotate the control pad, you can perform other types of cooking methods – you can steam them, make dumplings, or execute a special move that create some kind of masterful dish. Additionally, there are various vegetables littered throughout the field. If you hit them into the animals, you’ll add that ingredient to the dish, making another meal when you cook them. There are tons and tons and tons of recipes, based on what vegetables you use, what animals you cook them with, your cooking method, and your character. At the end of each match, you’re graded on the food you cook, and the player with the most points wins. 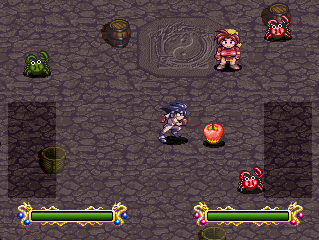 There are a total of eleven chefs throughout the game. The Story Mode only lets you play as Hao, but the Free Battle lets you pick between all of the characters. Some of these include Anisu, who bears a resemblance to Jam Kuradoberi from Guilty Gear; Kumin, the cute girl with white hair; and the evil Ajikage (Flavor Shadow), who’s dressed as a ninja. The game keeps a record of everything you’ve made, which is probably very interesting if you (A) have an intense interest in Asian food and (B) can fluently read Japanese. I can claim neither of these, but hey, it’s there if you’re into it.

The animals aren’t completely helpless, but their meager attacks are the least of your worries. While you’re trying to beat up as many animals as possible, your opponent is doing the same thing. Furthermore, then can attack you to screw up your cooking techniques and steal the disabled animals for themselves. Although it’s impossible to actually kill each other, if a character runs out of life, they surrender their dish to the other player. At least you can beat them up to get it back. 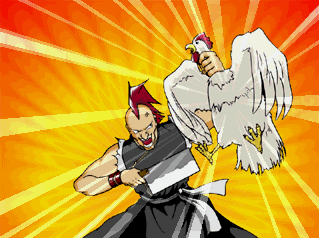 While this may sound kind of fun, in practice, it’s just a lot of running around and hitting stuff. The enemy AI bounces between being stupid and aggravating, as it will either attack you relentlessly, or wander off into a corner for awhile. There is a two player mode, which is a bit more fun, but both players must stay on the same screen, greatly reducing the range of movement.

Additionally, Cooking Fighter Hao looks and feels like they spent all of the budget on the cutscenes and practically nothing on the game. The sprites are cute, but there’s only one arena in the entire game, and it’s a boring grey arena over a floating blue background. The music is pretty annoying too, and barely changes throughout the game. 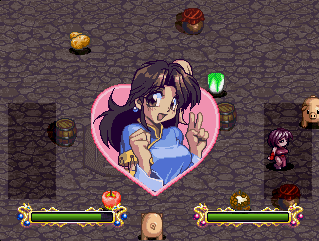 It’s hard not to admire Cooking Fighter Hao just for being one of those weird Japanese games you’ll never see in the States. The concept is hilarious, and the first time you see a fallen opponent swoon over what delicious meal you’ve apparently cooked, you may crack a smile. But the whole thing is really just a one note joke overblown to Dragon Ball Z-like proportions of monotony. And the cooking fights would make a decent Flash game. But for a full fledged title? It’s not really worth it. If nothing else, it’s a prelude of the wacky humor seen in later Nippon Ichi titles like Disgaea and Makai Kingdom. Nippon Ichi actually held a contest awhile back on which secret characters to feature in their strategy games, and Hao was one of the options. Alas, he was never voted in.