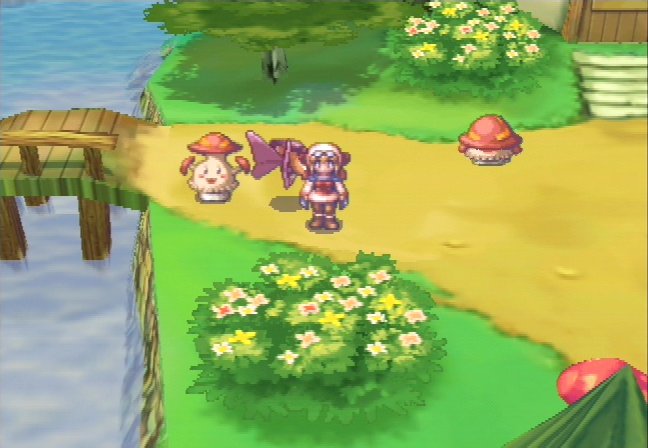 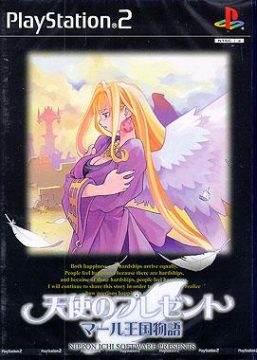 Angel’s Present (or Tenshi no Present, if you’re sticking with the Japanese names) is made up of five short stories starring various characters from the Marl Kingdom games. The first is a side-story in Cornett’s original adventure, and has the crew setting off to find the kidnapped mother of a young girl. (This was reintegrated into the Japanese DS version of the first game.) The second serves as an epilogue to Little Princess, as Kururu (now sixteen) must convince her father that the dashing Cello is a suitable husband. The third (and definitely the best) chapter stars Marjoly and her gang, as they hunt down their missing army of feline minions. The fourth stars a young kitten caught in a Romeo & Juliet style war, and the fifth is a prologue to the events in the other games, focusing on Sherie and the ancient winged people alluded to many times in Little Princess. (This was also featured as bonus content in the Japanese version of Marl Kingdom for the DS.) 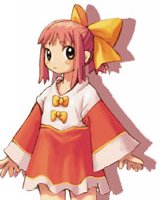 A little girl that Etoile finds lost in the forest. Her mom’s been kidnapped, so it’s up to Cornett and crew to save her. Elly is actually an Erlinger is disguise (one of those little mushrooms), so she doesn’t appear in human form often, although she does make a cameo appearance in the store in La Pucelle. 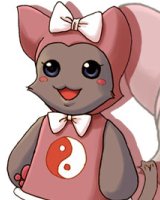 Pekonyan is a tiny kitty cat in the servitude of Akujo. She is caught in an overwhelming tragedy – her beloved serves under Marjoly, thereby making them sworn enemies. 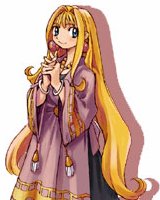 Cello’s compatriot who shows up in Little Princess at an older age, Cherie is one of the winged people from ages long past. 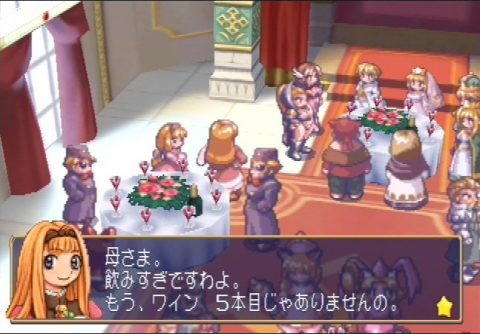 This being a PlayStation 2 game, all of the backgrounds are now 3D, although the characters are still sprites. It still looks pretty low-tech, but it runs smooth and loads quickly, which is better than most first-generation Playstation 2 games. While much of the music and many of the sprites are recycled, it still maintains the bright and pleasant feel of the previous games.

The battle system builds on the one from Little Princess, although spells go back to using MP rather than money. There can be four leaders on the battlefield, and each can have three partners, whether they be puppets, monsters or other human characters. Most partners cannot be directly controlled, but they’ll attack randomly in combat, and also modify various statistics of their leader. At maximum, you can have sixteen characters on the screen, fighting at the same time. While this may sound like it would make the game too easy, some of the boss battles can get a bit rough, so matching up your characters plays a big part in the strategy. It’s here where you begin to see the depth that eventually crops up in Nippon Ichi’s later strategy RPGs. Even though some people may not enjoy its disjointed nature – once you finish a chapter, you never play as same characters again – but the format does keep the game from getting too stale. This is especially important in Kururu’s chapter, considering that you’re visiting some of the same areas and even doing some of the same quests as the previous games. Angel’s Present is definitely the best of the series.

In the end, it’s a little hard to figure out who the Marl Kingdom games are aimed at. Given the subject matter, it’s easy to surmise that they’re aimed at adolescent girls. But the bizarre sense of humor and occasionally sultry character designs (Marjoly wears little more than a thong) definitely makes it seems like it’s aimed at anime geeks. Given their simplicity, the first two titles definitely seem like they’re aimed at RPG newbies, although Angel’s Present certainly gives enough substance that more seasoned vets can get into it. It’s a shame, then, that the later titles were never translated, because they’re both quite a bit better than Rhapsody. Thankfully, they’re pretty easy to play, and the writing level is simple enough that novice Japanese students should be able to understand what’s going on. If nothing else, the Marl Kingdom paved the way towards even more excellent titles featuring Nippon Ichi’s unique sense of humor.

Before the Marl Kingdom series, Nippon Ichi was primarily known for small puzzle games. So it makes sense that they’d capitalize on their properties by returning to their roots. They published Marl Jong for the PSOne, which is, of course, Mahjong with Marl Kingdom characters. Given that this style of Mahjong isn’t exactly well known to Westerners, it’s a little hard to import unless you’re familiar with the rules (I know I’m not.) They also released Marl de Jigsaw for the PlayStation 2, a puzzle game also featuring the characters. I can’t say that assembling pictures piece by piece is really all that exciting, so only hardcore Marl fans need apply. Like most Japanese games, there are also a few cellphone-only games starring the characters. 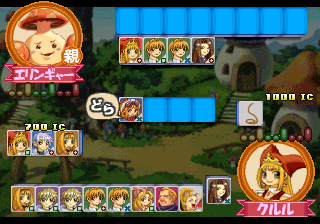 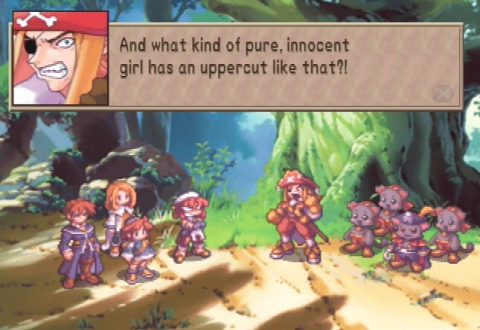 La Pucelle isn’t technically a Marl Kingdom game, because it separates itself from most of the characters, and the style of gameplay is completely different. Still, there are plenty of influences that can be found. The side-view battle systems used in Little Princess and Angel’s Present look exactly like the fight scenes in La Pucelle, right down to the font used in the numbers. Some of the enemies are the same, including the Erlinger mushrooms and those silly little cat things. Angel’s Present seems to have started the knack of giving goofy, random names to enemies that join your party as well. The Rosenqueen shop found in La Pucelle is owned by Etoile and Crea’s family, as the busty clerk looks very reminiscent of their clan. Their theme music first showed up in Little Princess, and later appears in both La Pucelle and Disgaea as the shop theme. All of the music in the series is composed by Tenpei Sato, whose style remains consistent throughout. Homard, the pirate captain, is meant to be the son of Kururu and Cello, and Eri, the mushroom girl from Angel’s Present, pops up randomly in the store as well. So playing the Marl Kingdom games will definitely help you appreciate a lot of the little tidbits in La Pucelle. Marjoly also pops up as a secret character in Disgaea.