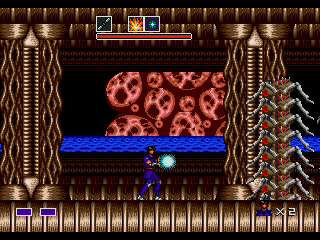 Many places on the Internet refer to Mystic Defender as the sequel to SpellCaster. Technically, this isn’t exactly true. It was actually intended as a direct adaptation of the second Kujaku Ou OVA, Kujaku Ou 2: Geneijo, eventually released in North America as Peacock King Spirit Warrior: Castle of Illusion. In Japan, the game had the same title as the OVA, and its back-cover and manual featured stills from the movie. Thus the numeral referenced the OVA, not the Master System / Mark III’s Kujaku Ou, whose story was very loosely based on the manga series and wasn’t really compatible with the OVA series’ continuity. 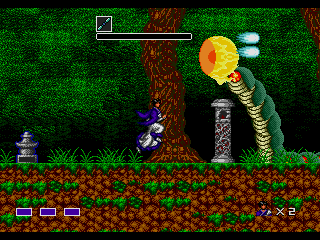 In Kujaku Ou 2, the infamous warlord Oda Nobunaga has come back to life in modern-day Japan, and seeks to revive an Old Testament-inspired demon he had been introduced to centuries earlier by a group of Portuguese Jesuits who now do his bidding as ghostly servants. Nobunaga eventually snatches Kujaku’s friend Asura, who has mystical powers of her own, and takes her to his newly-revived castle of Azuchi. There is an historical background to this story ; Oda Nobunaga was a major figure of Japanese’s warring states period, and he did associate with Jesuit missionaries. His razing of temples and large-scale massacres made him a common villain in Japanese fiction, and may be the reason why Azuchi castle was burned to the ground after his death. Other works prefer to focus on his military exploits, and he appears as either protagonist or antagonist in numerous video games. 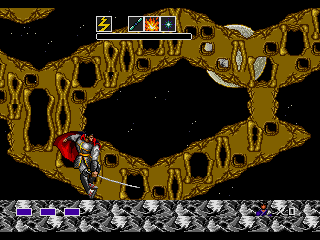 When Sega removed all traces of the licensed material for the game’s Western releases, as they had done with SpellCaster before, they opted to go with all new names: Kujaku, or Kane in SpellCaster, is now Joe Yamato, a name likely inspired by Shinobi‘s Joe Musashi, and he has again been given a new outfit, this time a purple armor with wrist protectors and a matching pair of pants. Asura, who made a brief appearance as Regina in the Master System game, has been renamed Alexandra, and Nobunaga is now Zareth, “henchman of the Evil King Zao”. The setting is still Azuchi castle. The original intro, which showed two characters from the manga detailing your mission, was removed and replaced by plain text, but as Mystic Defender is purely an action game, the story isn’t essential to its enjoyment. 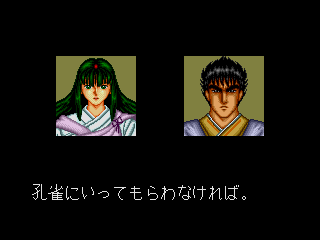 The basic attack is a ball of spiritual energy that can be charged to let out a more powerful blast, like in SpellCaster‘s side-scrolling sections, but this is where the similarities end. For one thing, Joe moves fast, and you can actually walk and fire at the same time, as well as hold a charge while moving. The first level plays like Revenge of Shinobi with a mystical bent, as you jump around from tree-to-tree and dispatch evil monks and snakes with single shots. But once truly underway, the game imposes a unique twist on the side-scroller formula, with a weapon system straight out of a shoot-’em-up. You’ve got three main means of attack, which you may switch between at the press of a button; in addition to the energy balls, there’s a sort of spiritual flamethrower and a spell that sends balls bouncing every which way. While the basic attack is best suited for weak enemies, tougher foes are better handled by charging your attacks. A fully-charged fire attack will shoot a flame in front of you for several seconds, whose angle can then be changed by pressing up and down on the D-pad, while the bouncing balls can reach hard-to-hit foes or allow you to concentrate on avoiding an enemy’s attacks while they do the damage. 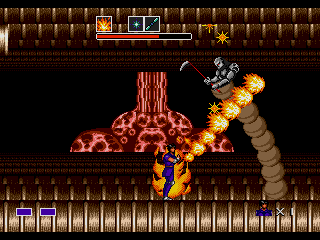 Charging your attack gauge takes about three seconds in your basic state, which can get tedious, as you need to be still for it to fill and getting hit knocks it back down to zero. Thankfully, each level has one or two power-ups that cut the charge time by a second, and two of them can be stacked up, so that it only takes a second to get fully charged when fully powered-up. Dying does not send you back to the beginning of the current stage, but it does set you back one charge level, while using a credit sets you back to basic speed, providing an additional incentive for staying alive.

There are also one-use special attack power-ups; in the Western releases, they summon a huge dragon to attack everything on screen, Golden Axe-style, while in the Japanese game they invoke a very impressive six-armed angel instead. 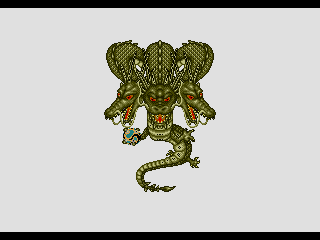 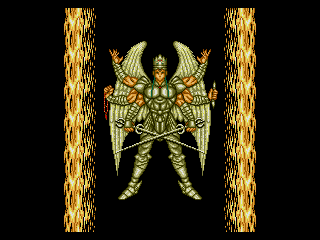 Apart from the somewhat tedious second stage, the level design is quite solid. The levels are short and smartly-constructed, with some more focused on fighting and others on platforming. The jump is a little wild, as it takes you very high in a very short amount of time; in general this means being careful not to hit your head on the ceiling so as not to interrupt the arc of the jump. There are parts specially-designed to force you to make clever use of your weapons, such as platforming sequences where you must execute a series of jumps while letting your flamethrower burn enemies as they fly at you, or a level where you can seek cover behind large skeletal remains and send balls bouncing everywhere to clear up the screen. The boss battles, too, are usually quick and straightforward, though it doesn’t mean they’re all pushovers. In fact, the game has some notable difficulty spikes, particularly Scene 4 and the final boss battle, which requires some slick dodging of projectiles, again evoking a shmup more than a side-scroller. 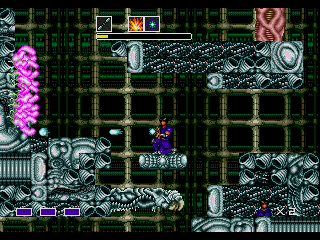 The visuals are also among the best of the Genesis’ first generation of games, with Rieko Kodama once again contributing, along with Phantasy Star alumni Takako Kawaguchi. Looking at the Aliens-inspired bio-mechanical horror of Scene 3, or the multiple layers of light-brown waves and red skies in the next level’s background, it’s hard to believe the game is from 1989. Between each level, there’s a cool animation of the hero charging up an attack and firing it at the screen.

Though not outright gory like a Splatterhouse, the more subtly creepy setting helps give the game a flavor of its own. Early in the game, the player faces the ghosts of the Jesuit missionaries enslaved in death by Nobunaga / Zareth. Once defeated, a surviving monk holding what appears to be a bible revives them as monstrous spiders and they scutter away, only to return several levels later to combine into a giant worm. Neither this red book nor the crucifix later on in the game were altered in the North American release, contrary to common practice at the time. 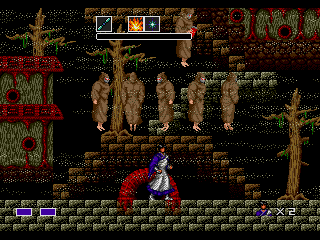 The soundtrack was clearly composed with that atmosphere in mind. It’s otherworldly, sometimes oppressive, and moves as fast as the game itself, up until the ending credits theme, which begins with a slow, off-kilter melody, before exploding into a triumphant jam reminiscent of old-school Falcom. Almost all of it works within its context, but even outside of it, roughly half of the tracks are standouts. 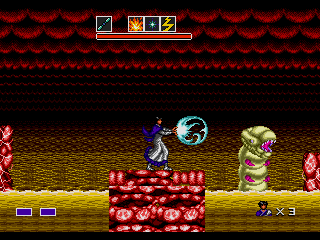 Mystic Defender is also known for a minor episode of censorship. In the Japanese version, Asura is fully naked when you rescue her, as she was in the OVA’s ending (and even on the cover of every other Kujaku Ou game). The North American release kept the original sprite at first, but later prints covered her up with what appears to be a pink dress or nightgown. This was apparently still not enough for the South Korean release, which took the trouble to dress her up in what appears to be a traditional Korean hanbok. It did, however, retain the angel summon, and uses modified versions of the character portraits in the intro. Bizarrely, the Japanese version is actually contained in the North American & European cartridges and can be accessed by inserting them in a Japanese Mega Drive. 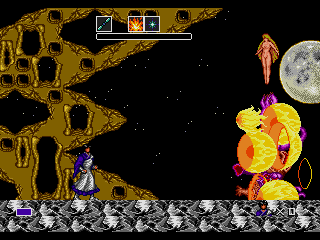 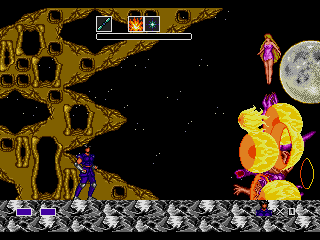 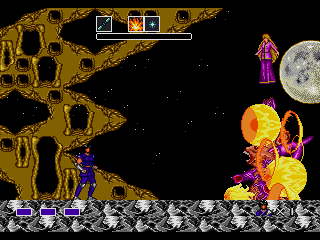 Mystic Defender has not had the long-term exposure of Sega’s other Genesis titles. While even games of controversial quality such as Altered Beast are systematically included on the Genesis compilations Sega puts out every few years, it has never once been re-released. Whether it’s due to licensing issues tied to the Japanese release or because it’s simply been forgotten is anyone’s guess. It did see play in some overseas arcades at the time as one of the titles chosen to run on the Mega-Tech System, a line of timer-based arcade cabinets that ran a selection of modified Mega Drive cartridges. It is easily one of the better action games on the system, and is still absolutely worth playing for its different approach to side-scrollers and the unusual atmosphere its source material inspired. Though Sega didn’t make any more Peacock King games, they would soon collaborate with its creator in a more direct capacity, recruiting mangaka Makoto Ogino to write and co-direct the 1991 Mega Drive action-RPG King Colossus. 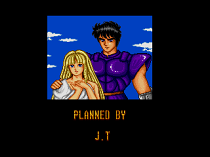 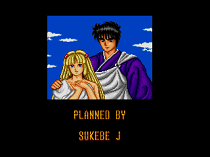 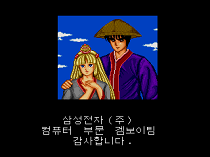 Hokuto no Gun & Happy Scans – These veteran manga scanlation groups picked it up in July of 2018.