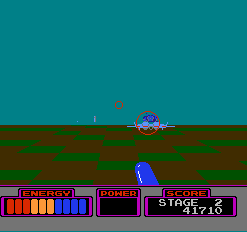 There’s a general consensus that licensed tie-ins suck, and Gundam games tend to suck even harder, if that’s possible. In fact, until Capcom saved the souls of Gundam geeks with that gem Mobile Suit Gundam – Federation vs Zeon Gundam games usually fell into three categories: godawful shooting platformers (see V Gundam, SFC), ultra-boring strategic simulations (Gundam Cross Dimension 0079, SFC) and mediocre beat’em ups (The Battle Assault are decent – how ironic that the genre is the least fit to represent the Gundam universe.) Oh, and don’t start me on the tons and tons of SD Gundam games around – although it’s a sad truth that these may be less terrible than most of them.

Apart from soccer games, there’s no other brand in gaming as prolific as Gundam: you literally can’t count how many were produced since the series began. That number skyrockets if you take into account the Super Robot Taisen series as well, which clearly has its roots in the Gundam franchise. If you wonder where all of this started – well, it started on August 8th, 1986 on the Famicom, with Hot Scramble.

Kidou Senshi Z-Gundam: Hot Scramble was the first Gundam game ever released for a console. It is, however, far from being the first Gundam game: besides LCDs, Gundam games had seen release on home computers. Gundam Last Shooting, released for MSX in 1984, is a game where the most fun part is getting aboard the Gundam while avoiding the crumbling roof of the White base. Once you’re into the Gundam, it becomes a Cabal clone from cockpit view. The less said about Last Shooting, the better. It’s easy to assume that Hot Scramble was the big quantum leap in term of sales: being released right in the middle of the ’80s, when “Famicom” and “Gundam” were the two magic words of the Bubble Keizai era. It was a wedding that just was bound to happen. What was less predictable is that Z-Gundam turned out a damn fine game. Well, half of it, anyway.

The first big surprise comes from the game’s credits. The man behind it is none other than Masanobu Endoh. If the name doesn’t ring a bell, try to refresh memory with Xevious and Tower of Druaga. Not exactly the nameless pseudonym you’d expect to see on a tie-in.

Second, Hot Scramble is a pure action game. That’s right, no isometric map to deploy your suits upon, and thank heavens no endless dialogues. Gundam games have the sad tendency to retell you the entire plot of the anime show, more often than not starting from the very UC 0079 beginning – just in case you missed the fundamentals. Both Kidō Senshi Gundam and Z-Gundam are excellent space opera anime. And once you’ll see them, you’ll understand why reading the whole story again and again is not funny.

Anyway, for the sake of this review, let’s just say that as the heroic Camille Vidan, you pilot the Z-Gundam, the strongest mobile suit (to the non-initiated: read as “robot”) created. It’s also the first one able to transform into jet form (known as the Waverider), just like Aerialbots and Macross’ Valkyries. You’re sided with the AEUG/UNT group and must defeat the fascist group known as Titans and the monarchic Zeon quartered at Axis. Gundam enthusiasts will be delighted to know that the game features an impressive roster of enemy suits: almost the entire Titans/Axis lineup is present, from the common HiZack, Galbady B and Masarai (the basic enemy infantry) down to the terrifying Psyco Gundam, The O and Qubeley. Unfortunately the same variety doesn’t apply to the good guys, as you’ll stick to Z-Gundam for the entire game.

Each stage is split into three parts. The first one puts you in the cockpit of the Waverider on the Earth’s surface, shooting any mobile suit that dares to cross your way. The action is in first person and the sense of speed, achieved via checkered background, is remarkable. The zooming and scanline effects for enemy sprite is commendable, especially given that it’s an early Famicom game. You’ll just aim your lock-on at enemies and fire, in the hopes of taking your foes down. You’ll quickly learn to shoot at enemies’ projectiles as well, in order to prevent yourself from damage. On the ground, turrets will try to shoot you down: you can destroy them as well. Luckily the Waverider does have a good degree of maneuverability (and a generous energy bar), and can even accelerate by pressing the A Button. The concept is simple, but the execution is stunning. 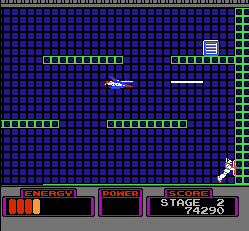 When you’ve taken down a set amount of enemies (obviously increasing in number as you progress further in the game), you’ll take off from the Earth’s surface and into outer space. Here, things get trickier, as you’ll have to fight large amounts of Mobile Suits that come from any direction: above, below, or behind you. The game basically plays the same as before, you can still speed up in open space in the hope to avoid enemy bullets. Yet, it successfully manages to give the illusion of 360 degrees of freedom that was boldly claimed on the box. Although the game is endless and loops at stage 30 or so, there is a moderate sense of progression, which mainly comes from the different mechs you’ll face as you advance in stages. A word on the audio too: the game does feature a total of three tunes, but since one is for the intro and another for the game over, that leaves just a main theme for the entire game. Frankly, I’d rather had a sound change between stages at the expense of a muted intro. At least the explosions sound effects are convincing.

Unfortunately, the best part is over. They demanded more and created a third section for each stage. Which, it goes without saying, almost destroys the game’s appeal.

Once you survive the mech swarm in open space, you’ll be brought inside the enemy base. It can be inside a Side Colony or inside an enemy ship (in which case you’ll have to disable it first), it doesn’t really matter. The game switches then to third person and becomes your average horizontal scrolling platformer. Cool, you finally get to control your Zeta Gundam in mech form! Yes, except that it sucks. The stages are horribly drab looking and the graphics more closely resemble Donkey Kong‘s construction site rather than the interior of a space ship. Your jumping ability is too limited to be of any real use: to navigate these mazes you’ll have to morph into Waverider again. Controlling the Waverider in these narrow corridors is a pain in the neck, especially since you’re in constant motion and can’t stand still. Imagine Thunder Force II‘s overhead stages controls, exacerbated by being in a cramped dungeon instead of an open field. 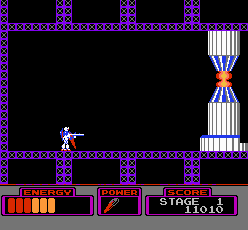 The whole point of these sections is to find some energy tanks to replenish your life, grab a power-up or two, and finally locate and destroy the giant reactor to end the stage, which are very similar to the ones present in Bionic Commando. If it sounds fun enough – well, it isn’t. The Z-Gundam can easily get rid of enemy mobile suits with one shot, and can even shoot in eight directions. The idiocy of the control system will become apparent once you reach the reactor and realize that in order to destroy it and avoid its return fire, you’ll have to morph to Waverider and fly for the room like a caged bird. To be fair, this sidescroller section isn’t completely worthless – all the mobile suits are faithfully rendered at least, and you get to fight GM II as well in earlier stages – but it’sfrustrating and just not that fun to play. What’s worse, it bogs down the pace of what may have been an excellent 3D shooting game. It’s perfectly understandable why Bandai decided to add these shoddy segments to the game: a first person game where you can’t actually see the mighty Z-Gundam in action (not to mention morphing into Waverider), would have been of little appeal to Gundam fans. Funny how certain things never really change: even the brick-falling section in the MSX game was clearly an excuse to show a close up front view of the Gundam.

There’s a curious ending to this story, though. Eventually recognizing its error, Bandai redeemed itself by releasing Kidou Senshi Z-Gundam: Hot Scramble – Final Version. This golden Famicom cartridge, limited to 1000 units, had the sidescrolling segments entirely removed from the game. Obviously, this is the ideal version – if the price tag that ranges between the 80,000 and 160,000 yen doesn’t scare you, that is. In fact, this may be one of the most expensive Famicom cartridges ever.

Japanese gamers enjoyed the game so much that it recently entered in the top 100 Famicom games chart compiled by Enterbrain in its Famicom 20th Anniversary Commemoration DVD. In 2004, to celebrate the impressive goal of 20 millions “Gundam Labeled” games sold, Bandai created a special GBA Famicom Mini edition of Hot Scramble (based on the consumer edition I’m afraid), the game that started it all. This one too will undoubtedly become another collector’s piece, as it’s the only game in the Famicom Mini Extra Series. Only 2000 were made, and it wasn’t sold in stores, but raffled as a contest prize to buyers of Gamecube’s Kidou Senshi Gundam: Senshitachi No Kiseki.

At any rate, this is a sadly overlooked (in the West) 3D shooter for the Famicom that deserves to become better than being known by Gundam fans alone. Check it out.

Links:
Zeta Gundam Warehouse A great place for an in-depth immersion into Z-Gundam universe. The plot is really a lot thicker than the simplistic “good vs evil” approach summarized, and Z is one of the highest points in the UC chronology. (Archived in the Wayback Machine)
GameFAQs Hosts a nice Hot Scramble FAQ, courtesy of Necropenguin.
Digital Gundam A Japanese homepage covering many pre-Hot Scramble Gundam games.
NTSC-UK Article on Famicom history. (Archived in the Wayback Machine)
Le Musee Famicom A very comprehensive database. In French.
Game Samurai A Japanese review of Hot Scramble.