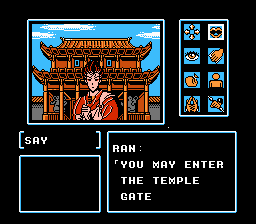 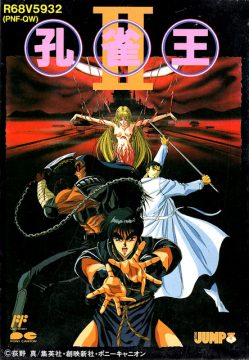 For their second Kujaku Ou game, publisher Pony Canyon went with a different developer, Atelier Double. The choice was a wise one, as it improves on its prequel considerably.

Right away, the art is more colorful and of generally higher quality, while the music is more dynamic and memorable. The game opens with an animation showing Peacock’s hands as he performs the Nine-Cuts mantra, one of his signature moves, before the title screen appears; let it sit for a few seconds, and a short intro starts, announcing the upcoming battle with his twin sister Tomoko in the manner of a TV series previewing next’s week episode. Right away, this signals two things: that at least some care was put into this game, and that it intends to be more faithful to its source material than the first game was. 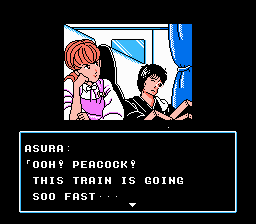 It’s also a pretty inventive and pretty weird take on the genres it combines. The game is essentially separated into two halves, dealing with two different story arcs; each half is further divided into two subsections, beginning with an adventure segment and ending with a RPG dungeon. Like the OVA its cover references, and like Kujaku Ou 2 / Mystic Defender before it, the first half deals with the resurrection of civil war general Oda Nobunaga, while the second adapts a central part of the manga, namely the confrontation mentioned earlier between Kujaku and his twin, following the efforts of a fallen buddhist monk to raise an army of demons from hell. 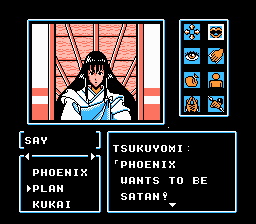 Not the greatest plan

The biggest change to the gameplay is the addition of a party. Asura, Onimaru and Kou Kaiho, three major characters from the manga, accompany Kujaku on his quest and intervene at different moments, giving the game a more lively feel. Asura and Onimaru played very minor roles in previous games, while Kou was nowhere to be found; their constant involvement in the adventure brings Kujaku Ou 2 closer to the feel of its source material than any of the other games.

You no longer have a cursor to examine things with, and the text menu has been replaced with a series of icons. One of the major locations in the game is Mt. Koya, where Kujaku’s temple is situated; when you travel around its grounds, the perspective changes to a top-down RPG-style view. 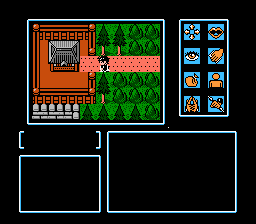 Both of the adventure segments suffer from the same pacing issues. In the beginning, things move swiftly as the game establishes its story. The way forward is mostly obvious; there is always a place to go to, a person to question, something to examine. If talking gets you nowhere, you simply choose the Pal command and let your companions jump in on the conversation. But after a while, things hit a snag. Suddenly, you have to try every command in every location to trigger a tiny event or a small bit of new dialogue, and even then, you quickly find yourself stuck again before you’ve made any real progress. 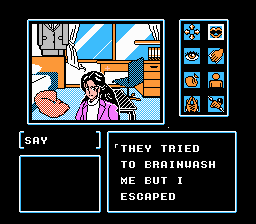 And so both adventures drag tediously for a while before you can move on to the dungeons, perhaps as a way to prolong the game artificially. In the first part, you must speak with the spirits of dead civil war generals to learn of Nobunaga’s plan; historical characters like Takeda Shingen, Akechi Mitsuhide and Hideyoshi Toyotomi. This is pretty cool at first, but there is so much back-and-forth between them and assorted tasks in other locations that the concept runs stale long before you’re done. 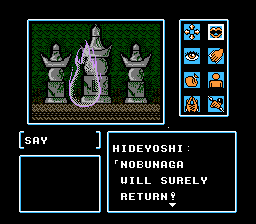 The dungeons is where the game gets weird. There, the view in the main window switches to a third-person, ground-level view of Kujaku as he walks through corridors. They’re circular, meaning that you will eventually get back to where you started if you continuously walk forward, and there are two of them on every floor; the outside corridor and the inside corridor. Doors on either side of Kujaku lead to separate rooms or let you travel between the two. There are no random encounters there, as enemies are found in fixed locations, and very few items. The goal is essentially to check every door and beat every unique enemy present on one floor, unlocking the stairs to the next one. 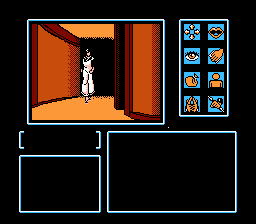 Battles are fought through a surprisingly deep turn-based battle system. For every action you choose, you fill an offensive and defensive gauge with anything from 0 to 100 magic points, multiplying their base power. Magic points are earned through battle and essential to combat, so it’s important to manage them well. In the first dungeon, you can even perform combination attacks, years before Phantasy Star IV or Chrono Trigger ever did it. First, you must pick which characters will participate. Each character has multiple spells at its disposal, on top of their regular attack. The characters and individual moves you pick plus the magic points you attribute to each will determine which party attack (or party healing spell) is used. Ultimately the complexity of this system is sort of nullified by the fact that simply making everyone attack together at full power does a ton of damage for a reasonable cost, making it the go-to move in every major fight. You also share a bar showing your party’s level, which increases as you defeat enemies. Each floor has a weaker enemy type that always reappears in a particular spot, allowing you to grind for magic points and party level. 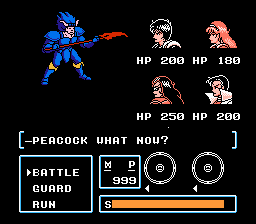 The second dungeon is a bit different, as you must fight alone. Instead of a party level bar, you have a gauge with one side representing darkness and the other light; as you kill enemies, the dark side fills up, increasing your offense, but the light side simultaneously goes down at a slower pace, weakening your defense. Eventually you obtain items allowing you to increase either Light or Darkness at will, but you still have to grind a good deal for magic points. As party attacks aren’t available, you have to work to find the enemy’s weakness, cautiously trying out spells at low power until you find the right one. 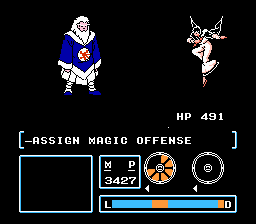 This all sounds very repetitive, and it is to a degree, but the fact that every enemy is a mini-boss makes the process somewhat addictive despite the fact that these dungeons are both on the long side. On your own, it takes a good deal of experimentation before you figure out how they work at all, and they can be very harsh, in that you can only save right at the beginning and the death of any team member kills the entire party. 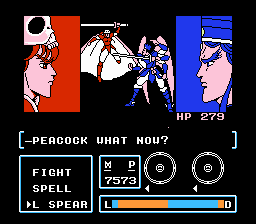 While clearly flawed in some ways, Kujaku Ou 2 is an interesting game. It demands a lot of patience, but rewards it with a cool storyline and atmosphere and a spirit much closer to the manga and OVAs than the other Peacock King games.

In 1990, author Makoto Ogino decided to take a break from the manga after bringing its original storyline to a close. After a few months attempting to launch another series, he found himself pressured to go back to it by his editors, embarking on the first of many sequels. As of 2018, he is currently publishing two prequels at a time in different manga periodicals, though at a slower pace than before. A second live-action movie was released in 1991, and a two-part OVA telling an alternate version of the main storyline came out in 1994, but Kujaku Ou 2 was the last video game to date.

Romhacking.net – For the translation patch.