The Famicom Disk System housed a number of adventure games, several of which were published by Nintendo themselves. Amongst more standard fare like the Famicom Detective Club duology and the folk tale parodies Shin Onigashima and Yuyuki, there was a bizarre, brazenly controversial title named Time Twist: Rekishi no Katasumi de…. (“On the Outskirts of History”). Written by Keiji Terui (who previously wrote Yuyuki) and developed by Pax Softnica, it seems like they took a look at Nintendo of America’s censorship rules and set out to create a game that broke each and every one of them.

The game begins focusing on the hero, a boy in 1995 Tokyo, watching a television broadcast by a fortune teller. If you go to the Devil Museum, she says, you will find romance, and she gives a spell that will seduce members of opposite gender. This is all, frankly, a little odd, but the protagonist takes off to the museum anyway, which is focused on a legend involving an ancient demon. (It’s just referred to as “akuma” in the game text, so it’s not clear whether it’s supposed to be the Christian Devil, or just a demonic creature.) One of the first things you see is a picture of the purported devil, who looks almost exactly like the main character, except blue. After poking and prodding around at various artifacts associated with the devil, you run into a cute girl – maybe the weird fortune teller was right? But before you get to properly introduce yourself, an earthquake happens, causing the two to embrace. In the heat of the moment, you say the words heard on television, in hopes to enchant your new girl. 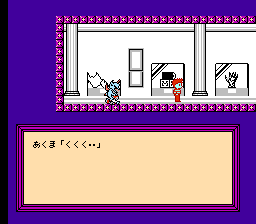 Except, oops, those words were actually a spell to resurrect the dormant devil, who was channeling the fortune teller and tricking you into coming to the museum. As a reward for your blunder, he steals your body and runs off, switching your spirit into the decrepit vessel of the demon. Your first act in your new demonic body is to scare the bejesus out of the local church, but eventually you track the devil to a local inventor’s house, who’s developed something called a Time Belt. With this, the devil travels back in time, but ends up accidentally taking you along for the ride. And so begins a journey through various periods of history, as you not only have to stop the villain from messing with history, but also regain your body.

Time Twist is a command-based adventure game like many others on the Famicom. The major change from other types of games is that certain areas are viewed from a third person perspective, where you pick the “Walk” command and then directly control your character back and forth. The hero also talks in the first person through the entire game (referring to themselves as “ore”), as opposed to giving themselves an explicit name, or letting the player enter their name for them, or referring to the player in the second person. Unlike Pax Softnica’s other adventure games, there’s no way to get a Game Over. Most of the game consists of the standard inventory puzzles, though almost every section requires that you take a quiz regarding real world historical knowledge, along with a handful of math and logic puzzles. The items you view in the museum early in the game also show up at various points in your adventure through history. 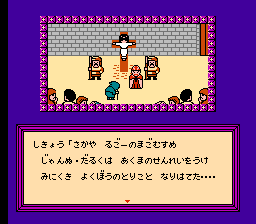 The first time period you travel to is 15th century France. At first, you just walk around as a ghost, though you can possess certain people and animals to order to interact with the environment. The first such human is Pierre, a simple peasant. One of the catches is that you can only jump out of someone’s body when they’re unconscious. So, when you want to leave Pierre’s body, you have to drink a whole bunch of wine and then find a place to collapse. Poor Pierre’s liver will hate you at the end of this segment, which is completed when you rescue Joan d’Arc and prevent her from being burned at the stake. 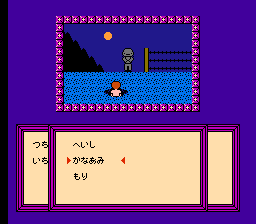 The second time period begins as you’re placed in the body of someone who is (unsuccessfully) attempting to escape from a German concentration camp during World War II. Here you run into a younger version of the inventor of the time belt, who ends up getting re-captured with you. During this time, the devil is also chatting with Adolf Hitler, and eventually possesses him, resulting in a climactic encounter when you must fight him in some kind of strange alternate dimension. 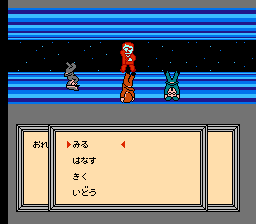 After taking care of this, the third time period puts you in the role of a healer in 4th century BC in ancient Greece. This is probably the most mundane all of the chapters, though it does end with you politely chatting with Cerberus and having you identify famous philosophers. 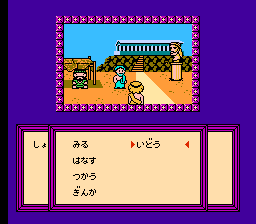 In the fourth time period, you jump to the United States in 1864, during the Civil War, casting you as a slave boy named George. After a day of hard work, you end up getting lynched by the Ku Klux Klan (!!), and then switch bodies to an older slave woman named Belle. During the rest of this segment, it turns out your master, Meyer, is plotting something against Abraham Lincoln. This section culminates in a variation of the famous “river crossing puzzle”, where you must transport various things from one side to the river to the other, using a boat. While this puzzle traditionally features wolves and geese, here you need to transport the two slaves, Abraham Lincoln, and three coyotes. 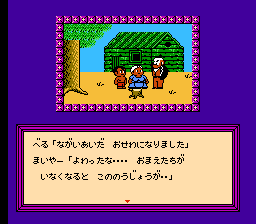 After this, you’re transported to Nazareth around 4 BC, inhabiting the body of a donkey named Cassim, under the ownership of Joseph and Mary. In this section, you get to witness the birth of Jesus Christ, and even manage to steal both the time belt and your body back from the devil. At this point, you travel back to present day 1995, only to find that Tokyo has been completely destroyed by nuclear annihilation. Here you learn that, back in the distant past, the devil had actually possessed Jesus, and did something along the course of history that led to a terrible war. 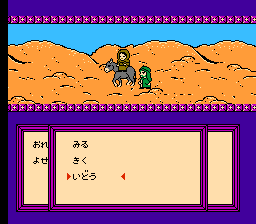 So, you go right back in time to the Nativity in Bethlehem, and face off against an evil baby Jesus. His first order to business is to trick you with various shadows, playing sort of a “shuffling cup and ball” mini-game using the images of Mary and Joseph. Then, he quizzes you on various people, places, and things that happened earlier in the game. Finally, you’re able to destroy him, take the time belt back again, and return to the moment right before you summoned the devil in the first place. 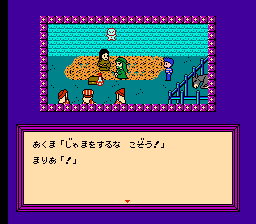 Everything seems to be okay. The earthquake happens, and you fall into the girl’s arms again…except, ironically, she ends up chanting the devil summoning spell instead of you, causing the whole mess to start all over. The screen turns black and white, and the credits roll. Womp womp!

To recap, the themes addressed in Time Twist include: divination, Christianity, devils, alcohol consumption and drunkenness, witch burning, the Nazis and the Holocaust, slavery, racism, nuclear war, and a demonically possessed Jesus Christ.

It’s redundant to state this, but Time Twist is just bonkers. Absolutely crazy. On one hand, it’s just a collection of shocking themes and twists. It’s definitely trying to be mature, which was especially uncommon in the console gaming space. But it’s also trying to address serious issues with the simple, cutesy look of an 8-bit video game, combined with the arcane, nonsensical adventure game design of the time. In one section, you’re spying on KKK meetings. In the next, you’re being quizzed by one of your slave friends about Mt. Rushmore (which wasn’t even built until eighty years after the Civil War). There’s no part of this game that isn’t completely ridiculous.

But it’s also a thing of beauty, that such a confounding title was not only created, but was published by a bright and family friendly company like Nintendo. But it certainly seems like they didn’t want much to do with it beyond its initial publication – it was the last packaged release on the Famicom Disk System (subsequent games were only released on the disk copier stations or on magazines) and was barely advertised. Even its cover art is vague, with the instruction sheet featuring the hero and the girl he meets at the beginning, who barely factors into the story at all. And unlike Shin Onigashima or Famicom Detective Club, it was never ported nor released on any Virtual Console. Nor has it been fan translated, as of this writing, as like many of the FDS adventure games, it seems to have gone overlooked by most of the English speaking community. It deserves to be more recognized than it is, if only for more people to puzzle over its very existence.