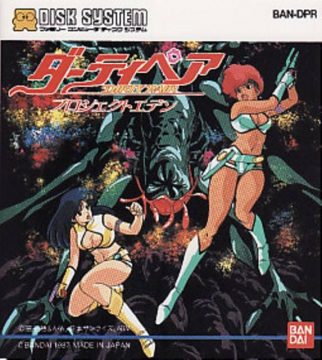 Perhaps one of the greatest anime series from the ’80s, Dirty Pair saw its full length movie, Project Eden, released in Japan in November of 1986. The following spring, the video game based on the movie was released on the Famicom Disk System by Bandai. The movie was smart, funny, sexy, stylish and action-packed. The game, on the other hand, featured none of that charm the series or the movie so greatly possessed, and is about as bad a video game you can imagine. One of the more unfortunate things about the production was that it was the only Dirty Pair game ever made. 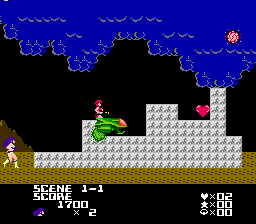 Although the game attempts to tie itself in with the movie by featuring a brief intro where the chief gives you the background and your orders for this case, it doesn’t really do a good job as some of the finer plot points don’t exacty follow the movie. This unfortunately sets the stage for the rest of the game.

The game is composed of four stages in total with two different types of levels that alternate between each other. The first and third stages are standard side-scrolling stages where you shoot as many enemies as possible until you get to the end of the stage. The second and fourth stages are maze-like and require you to gather eight keycards before you can open the final door. In the early days of emulation, it was commonly believed to be impossible to beat these maze stages. Even with a map, they are still difficult to navigate. You are further encumbered by enemies that respawn even while you’ve killed every last one on screen. It’s easy to get lost and/or get overwhelmed by enemies and die. The game in general and the objectives of each stage have very little if nothing to do with the movie. 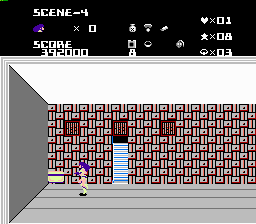 The game is also incredibly hard, as you’re wiped out in a single hit and you’re only given two continues. When you die on the first and third stages, you’re tossed way back to the beginning of the level. The second and fourth stages do let you start off in the room you died in though, but you still have to contend with the frustrating mazes and the respawning enemies. The game does have one powerup where Kei appears in her flying bike and you hop in, but you still die in one hit and because of the increased speed, you can run into an enemy and die before you can blast it.

Unfortunately, the movie and game came out at a time when the Famicom was still in its infancy and developers were still figuring out the system. As a result, the game ends up being very ugly, blocky and bland, looking nothing like Dirty Pair. While most of the enemies don’t resemble anything that would’ve appeared in Dirty Pair, it appears an attempt was made to put a few actual enemies from the movie into the game. There are the claws that attack you from the ceiling (Wattsman’s robot arms) and maybe those green creatures are supposed to be Sadinga’s. 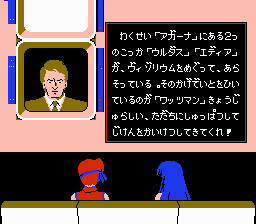 There are five different endings of the chief chewing you out for the usual accidental mass destruction. Oddly enough, these endings are closest to the spirit of the Dirty Pair manga/anime, and even feature a reference to the series roots in Japanese women’s pro-wrestling. The ending you get is entirely dependent on your shooting accuracy. The game stores the amount of times you fire a bullet and the number of bullets that hit an enemy. The number of enemies hit and the number of bullets fired are divided by each other and then multiplied by a hundred. That accuracy percentage is then compared to five threshold percentages which decide which ending you get. 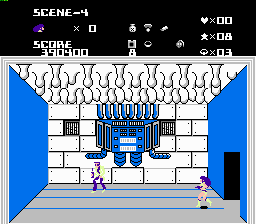 If you’re a fan of the Dirty Pair series, it’s highly recommended you do not play this game unless you want come away from it entirely bummed out. The game can be frustratingly unfair and half the stages feature maddening design decisions that makes the game anything other than enjoyable. For a game that’s supposed to be a cash-in, it has incredibly bad timing. Just imagine if the game was released on the SNES as a beat-em-up. Now that would’ve been awesome.