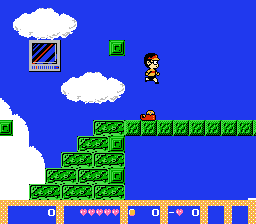 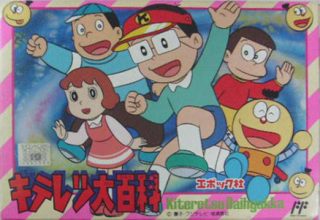 Fujiko Fujio was the pen name of the manga duo Hiroshi Fujimoto and Moto Abiko, known as the creators of Doraemon. Beyond the world famous time traveling robot cat, they created numerous other works, one of them being Kiteretsu Daihyakka (“Kiteretsu Encyclopedia”) starring an genius inventor kid named Eiichi Kite. The manga ran in the 1970s, but became a TV series from 1988 – 1996, along with a variety of video game tie-ins, including a Famicom title. 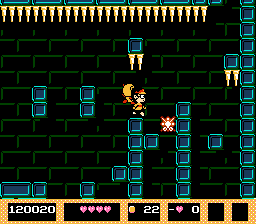 In this game, Eiichi has invented a dream mirror, which lets people experience their own dreams, but it ends up getting shattered, trapping his friends in a nightmare world. His journey to save them plays out like a typical 8-bit platformer, with some twists. Classic video games always had an element of surrealness to them – the killer mushrooms of Super Mario Bros, for example – but Kiteretsu Daihyakka happily entrenches itself in the land of the bizarre. The most prominent example is a room that features dinosaurs rendered somewhat like an 8-bit Picasso painting. The game is filled with random enemies like scissors and staplers; one boss creature is a mollusk, a later one is a flying television set with the image of that same creature. Did its spirit possess this appliance to exact its revenge?

Mechanically, it’s a bit more ambitious than most, with the main gimmick being that you can flip gravity and walk on the ceiling. It’s a nice idea, seen in later games like Irem’s Metal Storm and Terry Cavanagh’s VVVVVV. As presented here, it presents some tricky platforming challenges made more troublesome by another gimmick – the constant presence of a partner. Eiichi is often accompanied by his robo pal Korosuke and/or his best friend Miyoko, who shadow his every movement. However, they share Eiichi’s life meter, and their movement lags just enough that they can fall down pits or get hit by enemies, which makes the game way harder than it should be. 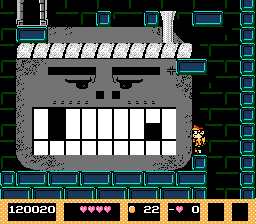 It has some other interesting concepts – when you die, you continue by borrowing health from Enma, the god of the afterlife, which you need to return or else he won’t give you a password. In many areas, you can create inventions by entering certain blocks and mashing the buttons, cashing in coins you’ve collected. However, the item you create is pre-determined, its use isn’t always clear, and it disappears when you leave the area. In other words, it’s not very well thought it. Still, most licensed games flounder because they’re hastily assembled cash-ins; the case with Kiteretsu Daihyakka is that it’s too ambitious for its own good.