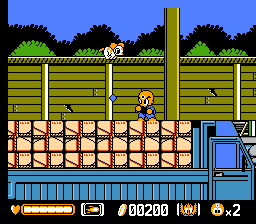 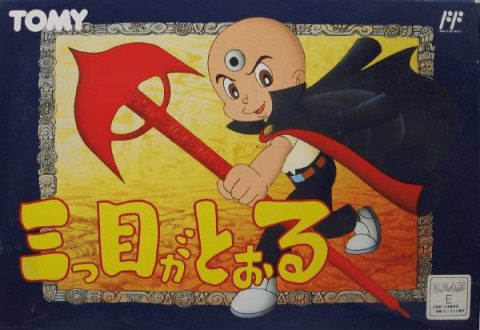 With a career spanning decades, it’s not too surprising that Osamu Tezuka, largely considered the father of manga and a significant figure in the birth of anime, has a few games based on his works. This includes the Famicom, where you can find the Japan only Mitsume ga Tooru, based on an anime adaptation of the manga with the same name. Translated in English to “The Three-Eyed One,” the series followed Hosuke Sharaku, an evil magical warlock with a third eye who normally lives as a normal kid when the eye is bandaged up. The series allowed the title character to act as both hero and villain, with the lead and his friend Chiyoko investigating mysterious ruins around the planet.

Being a licensed game in the 8-bit era, there’s little solid narrative here, leaving the game proper to speak for itself. Thankfully, it does, and it really captures a lot of popular trends from late 80s and early 90s anime. Big eyes and goofy expressions galore, with a good use of the Famicom’s limited color pallet to boot. There’s not one frame of the game that looks poor, and the color and sprite work always fits the light-hearted but strange and occasionally alien feeling areas. Chiyoko’s shop especially stands out, with its vibrant and clean color work and her detailed, larger sprite. The final boss relies on possible seizure enduing flashing at points, but that’s the only significant problem with the aesthetics. The music is equally lovely, though the boss theme starts to become obnoxious due to how many hits bosses can take. 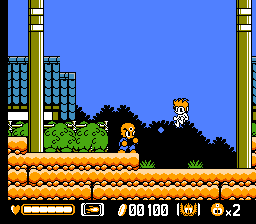 Hosuke controls very similarly to Mega Man from the first game. He can run around, jump, and shoot bullets from his third eye, with the only major challenge being around the third area where crabs can easily duck under the forehead shots until they raise their claws. He’s a bit heavier than Mega Man, but mostly the same. The one major exception is an additional move he has where he summons his spear. However, it’s not an attack, but rather a possible extra platform. The spear comes when you hold down the attack button and can then be thrown, in which it will go forward slightly and then turn and fly off screen in the other direction. If you manage to land on it, though, it will freeze in place and you can use it to clear a difficult gap or get a higher jump from its buoyant nature. If you were expecting it to be the game’s main gimmick, though, bad news. There are very few points where the spear is required, or even particularly useful, but it may be for the best. It’s awkward to use, even once you get the timing down, so sticking with classic platforming is usually the best plan.

As you move about and defeat enemies, you can collect coins off them that you can use in Chiyoko’s shop. She sells lives and health packs, but the main focus are the different bullet types you can snag, including one that allows you to control the direction of the bullet that makes many enemies and bosses child’s play, especially the boss of the third area. Every bullet type is useful in its own way, so it really comes down to what fits your play style best.

The goal in every area is to move to the end and fight the boss, simple stuff. However, all five areas have their own tricks and gimmicks, keeping the game from feeling stale. The first area has a battle on a moving truck, the second has a tricky tunnel run based around dodging and spacing, the third had obstacle enemies you have to move, and so on. The boat segment starting the forth area sticks out particularly for the changing color of the sky, a little atmospheric flourish that makes the level pop. 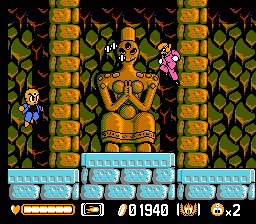 Bosses also come with a ton of variety, none of them similar to the last. The first is a goblin that hops around and needs to be damaged by a statue shooting bandages before you can hurt it, a grueling but rewarding fight that keeps you moving. The second and third bosses are a bit of a slog, but they force you to pay a ton of attention to patterns and trade blows with enemies with different conditions that only leave them vulnerable for a brief window. The forth boss is a ghost with a pattern that changes with your place on the platform and requires you not be afraid to get up close to avoid a locus attack. The final area bosses all have their own wildly different sets of moves, but they fundamentally test what you learned from the other bosses, with the last boss requiring both reflexes and the ability to capitalize on a moment. All of these bosses are rewarding to conquer, but some more so than others. They all take a ridiculous amount of hits, like Mega Man fighting a robot master without the weapon they’re weak against. Best be prepared for slog matches that can go on for a few minutes.

The game is just hard enough, with odd challenges that anger at first, but become manageable once you figure out the trick (though that tunnel run in area two pushes it at moments). It stands out as one of the most varied platformers of the era, though not necessarily the most inventive. The game simply doesn’t add much to the formula, but it manages to stick out through sheer confidence of design. Amusingly, the game’s easy mode is kind of a lie. The only change made is that you get dragged out of instant death pits by a magic bird, and those are far, FAR from the greatest threats the game has in store. Spikes are what will drive you crazy. 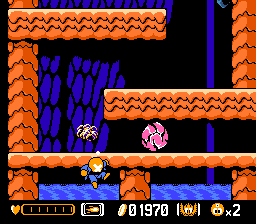 Mitsume ga Tooru never made it to the states, and Hosuke remains mostly unknown in the west. However, he has popped up in a few games western players may recognize, having significant roles in both Sega’s PS2 Astro Boy game and the GBA counterpart, Astro Boy: Omega Factor. He really sticks out in Omega Factor as the major villain of the game, ruling over a bad future Astro Boy has to stop. It’s nice to know the little three eyed kid still gets love in his home country, and he deserves some in the west as well. This Famicom title remains as a cult classic among retro fans, at least, and it will hopefully find a wider audience over time.