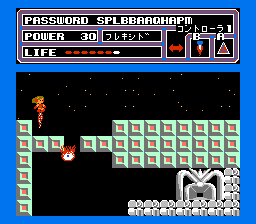 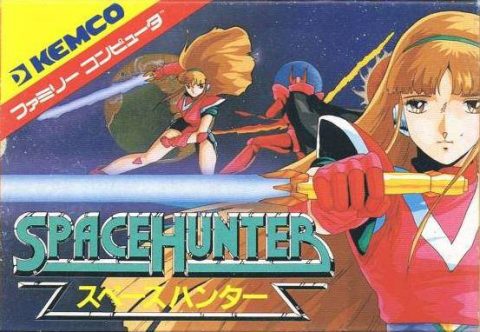 Space Hunter is a science fiction action-adventure game from Kemco, starring a female cyborg named Altiana. The evil Dr. De Gaulle has rebelled against the governorship of Earth and has hidden himself and his subordinates among seven maze-like asteroids outside of Earth’s orbit. Your goal is to explore each one, find various power-ups and weapons, defeat the boss, and then blow it up. Once you’ve beaten the first six, then the final area is opened.

Thematically, Space Hunter is similar to Metroid, except it has multiple planets, and is even less coy about a female protagonist! It was released about a month and a half after Nintendo’s title, so it’s extremely unlikely it was directly influenced by it. Instead, it seems to take its inspiration from The Legend of Zelda, which was released early in 1986. The inspiration is easy to see based on the user interface, particularly the status screen, which breaks down assigning weapons and items to the “B” and “A” buttons. However, since it predated the use of battery backup for ROM carts, so it instead uses a password, which is curiously shown at all times at the top of the screen. 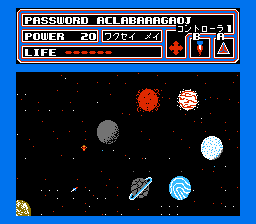 The main goal on each asteroid to defeat the boss, but there are important items to find too, mostly weapons and other enhancements. Since Altiana can fly (even in the cold, dark expanses of space as she zooms between levels), you can freely zoom around the stages, which are each laid out on a 9×9 grid. There are many doors spread out in each stage – when you enter one, it changes to a single room with an overhead perspective. Once you defeat all of the enemies here, you’ll either get a hint or an item of some kind. Once you find and defeat the boss, you have a limited amount of time to retrace your steps and escape before it blows up, potentially taking you down with it.

Despite its ambitions, Space Hunter falls apart rather quickly. While Nintendo’s titles felt relatively advanced for mid-1980s video games, the game just looks, feels, and sounds much older, like something that would be on MSX computers instead of a Famicom. All of the characters are square-shaped, so they all look kind of silly. Altiana has a very striking character design on the cover and in the manual, but her sprite just doesn’t quite come across with the same dignity. The enemies are all a random assortment of things that barely make sense in a sci-fi setting, including lightning bolts, floating lips with fangs, ghosts, and others. The game runs at a low frame rate, making the whole thing feel rather shoddy in motion. It utilizes flip-screen scrolling, which feels old-fashion for a side-scrolling game. Even exiting the pause screen is accompanied with a brief loading period. There are only two songs in the entire game, and they wear out their welcome within mere minutes. 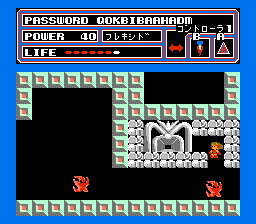 Altiana’s main weapon is a time bomb. Despite its name, it’s not actually on a timer – rather, you lay one down, and once you move out of its blast range, it will automatically detonate. However, you can only lay one at a time, and the entire game freezes for a second while it explodes. With some practice, you can maneuver well enough to trap enemies within its explosions, but it’s still far more awkward than it should be considering you’ll be using it most of the time. There are several other weapons, including a projectiles that work in a more straightforward manner. However, not only do these require “power” to use, but you need a minimum amount to even use it at all. For example, the crystal beam, which can be found pretty early on in the game, only takes one power unit per use but requires 40 to function. If it drops below, then it’s back to time bombs until you can build it back up. Additionally, in the overhead sections, enemies can move unimpeded by the narrow corridors but your weapons won’t penetrate them, so these sections, however short, become really annoying. Certain bosses can also only be defeated with certain weapons, too.

Also, it’s not clear if this is a glitch or a “feature”, but if your power exceeds 255, then it flips back around to 0. One of the most powerful weapons in the game, the Final Arm, requires 250, so it’s quite easy to overflow your power when trying to use it (it is incredibly powerful, since it kills all of the enemies on the screen). 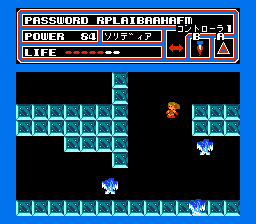 As to be expected from one of these early NES exploratory games, there isn’t much in the way of guidance. You can technically visit the planets in any order, but it’s not really recommended, since you’ll get more weapons by exploring certain, easier planets first (and you need the fin item before you can dive into the sea in the water planet). Within the context of the game, it will name the items you get but won’t provide any explanation to what they actually do. The status screen has a radar that shows you the locations of the doors on the asteroid but nothing else, making it of minimal use. Indeed, since most of the doors just give hints (and many of these are meaningless), you can skip most of them. Some of the planets also have hidden doors, which hide necessary equipment, requiring that you bomb everywhere. Also, you better make sure that you’ve obtained all of the items you need before you fight the boss, because you finish the level and blow it up, all of the items you didn’t get are gone.

So Space Hunter is not what one would really call a “good” game. Many of its issues can be resolved by reading a FAQ that explains the weapons and shows where the pertinent items are, the same of which can be said about or any other similar game from the era, but the core gameplay is so clumsy and so tedious that it doesn’t really make the game all that fun. At least it’s rather generous when it comes to difficulty – along with the passwords, if you die, you’re simply tossed back out into outer space with all of the items you had, with full health (though it doesn’t restore your power). Plus, once you know where to go and what to do, the game can be beaten relatively quickly. 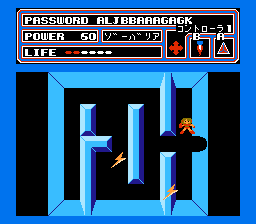 Still, as an early example of this type of open-ended action game, Space Hunter is still worth examining for fans of games like Legacy of the Wizard, The Guardian Legend, or Blaster Master. After all, as a 1986 release, it did predate all of these games, and many of its concepts are fairly interesting, if not particularly well executed. Plus, it was part of the wave of mid-80s games that featured women in starring roles, along with titles like Layla, The Wing of Madoola, Wonder Momo and Valkyrie no Bouken.